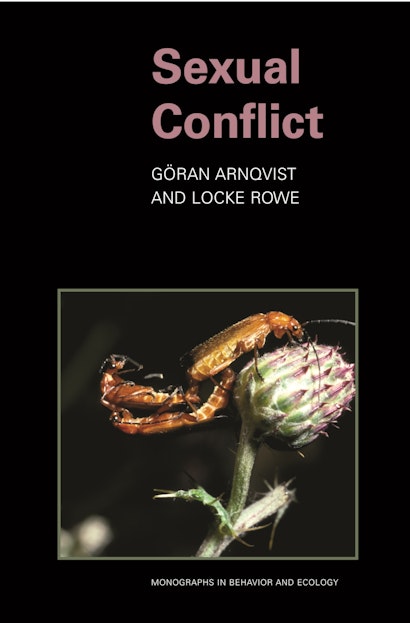 The past decade has seen a profound change in the scientific understanding of reproduction. The traditional view of reproduction as a joint venture undertaken by two individuals, aimed at replicating their common genome, is being challenged by a growing body of evidence showing that the evolutionary interests of interacting males and females diverge. This book demonstrates that, despite a shared genome, conflicts between interacting males and females are ubiquitous, and that selection in the two sexes is continuously pulling this genome in opposite directions. These conflicts drive the evolution of a great variety of those traits that distinguish the sexes and also contribute to the diversification of lineages. Göran Arnqvist and Locke Rowe present an array of evidence for sexual conflict throughout nature, and they set these conflicts into the well-established theoretical framework of sexual selection.


The recognition of conflict between the sexes is transforming our theories for the evolution of mating systems and the sexes themselves. Written by two top researchers in the field, Sexual Conflict is the first book to describe this transformation. It is a must read for all scholars and students interested in the evolutionary biology of reproduction.

"Sexual Conflict offers an alternative interpretation of the idea of co-operation between males and females. . . . [It] provides a convincing account of an antagonistic relationship driving evolution. It sets out to illustrate the ubiquitous nature of sexual conflict and persuasively presents the evidence for this, concluding that traditional views of peaceful co-operation are perhaps not as accurate as once believed."—Helen L. Kroening, Biologist

"This book addresses a very topical field within evolutionary biology—the existence of conflicts of interest between mates. Indeed it provides the first substantial review of the natural history and evolutionary dynamics of sexual conflict. Cogently and articulately argued, it will no doubt become essential reading for all those interested in the subject."—Tom Tregenza, University of Exeter in Cornwall

"This book represents an important contribution in synthesizing a new field of study. The authors have for example done an outstanding job of integrating hundreds of studies, published in a broad diversity of unrelated journals, into the context of intersexual conflict. Their presentation of pertinent empirical studies provides an unprecedented wealth of valuable information."—William Rice, University of California, Santa Barbara