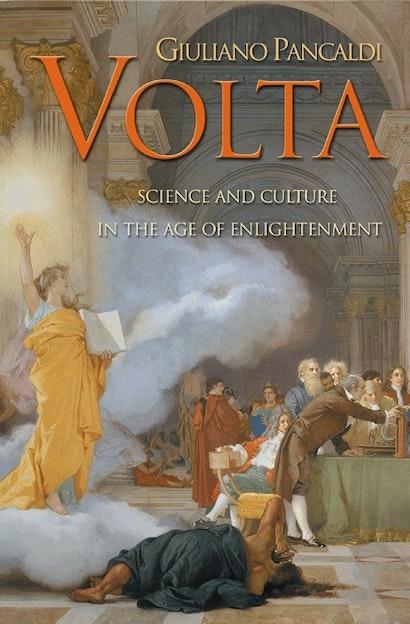 Giuliano Pancaldi sets us within the cosmopolitan cultures of Enlightenment Europe to tell the story of Alessandro Volta — the brilliant man whose name is forever attached to electromotive force. Providing fascinating details, many previously unknown, Pancaldi depicts Volta as an inventor who used his international network of acquaintances to further his quest to harness the power of electricity. This is the story of a man who sought recognition as a natural philosopher and ended up with an invention that would make an everyday marvel of electric lighting.


Examining the social and scientific contexts in which Volta operated — as well as Europe’s reception of his most famous invention — Volta also offers a sustained inquiry into long-term features of science and technology as they developed in the early age of electricity. Pancaldi considers the voltaic cell, or battery, as a case study of Enlightenment notions and their consequences, consequences that would include the emergence of the “scientist” at the expense of the “natural philosopher.”


Throughout, Pancaldi highlights the complex intellectual, technological, and social ferment that ultimately led to our industrial societies. In so doing, he suggests that today’s supporters and critics of Enlightenment values underestimate the diversity and contingency inherent in science and technology — and may be at odds needlessly.


Both an absorbing biography and a study of scientific and technological creativity, this book offers new insights into the legacies of the Enlightenment while telling the remarkable story of the now-ubiquitous battery.

Giuliano Pancaldi is Professor of the History of Science at the University of Bologna. His books include Darwin in Italy: Science across Cultural Frontiers.

"This is by far the best book about Volta in English. . . . It is contextual, unawed, and enriched by new manuscript material. It is also far more than just a biography. Based on this study of one individual's electrical activities, Pancaldi makes general arguments about the culture of science at the end of the Enlightenment."—Patricia Fara, Times Literary Supplement

"In this detailed and ambitious book, Volta's life and the fascinating and complicated patterns that led to the battery are beautifully described. . . . Every chapter has an interesting and original thesis, shows detailed and painstaking knowledge of manuscripts and adds to our knowledge of Volta and his time."—Fabio Bevilacqua, American Scientist

"An insightful chronicle of an individual genius riding global tides of cultural transformation. . . . A fascinating mix of science and biography."—Booklist

"Giuliano Pancaldi's engaging book contributes substantially to a reappraisal of the sciences of the Enlightenment, as well as providing a wealth of information about Volta's life and accomplishments. . . . [I]t is an impressive accomplishment that significantly advances the historiography of the sciences in enlightened Europe."—Jan Golinski, American Historical Review

"This is a remarkable study of Alessandro Volta's science of electricity in its social and cultural context, one that adds significantly to the scholarship on Enlightenment science and technology. The first monograph on Volta to appear in English, it offers an in-depth contextual analysis of his experimental practice founded on Guiliano Pancaldi's detailed knowledge of the sources."—Massimo Mazzotti, Technology and Culture

"This is by far the best book about Volta in English. . . . It is also far more than just a biography. Based on this study of one individual's electrical activities, Pancaldi makes general arguments about the culture of science at the end of the enlightenment."—Patricia Fara, Chemical Heritage

"Giuliano Pancaldi's study of Alessandro Volta reveals the vast international trade in scientific knowledge that, by the end of the eighteenth century, had transformed the promotion of experiment. Pancaldi's treatment of Volta as a major figure in the revolutionary world of the late eighteenth century is an important addition to studies of a scientific public."—Larry Stewart, Business History Review

"Pancaldi's book is the best thing on Volta that has ever been written. The author's command of the scientific issues is impeccable, and his presentation of the contributions and reactions of Volta's contemporaries is equally successful."—Charles C. Gillispie, Princeton University

"This work is a splendid contribution to knowledge that will have wide appeal. It deals with a seminal figure in the development of science—an intellectual giant who was to some real extent a self-made scientist. Presenting the story in clear and dramatic terms, the book is a milestone in our understanding of Enlightenment science and of the ways that science is related to its social and cultural matrix."—I. Bernard Cohen, Harvard University