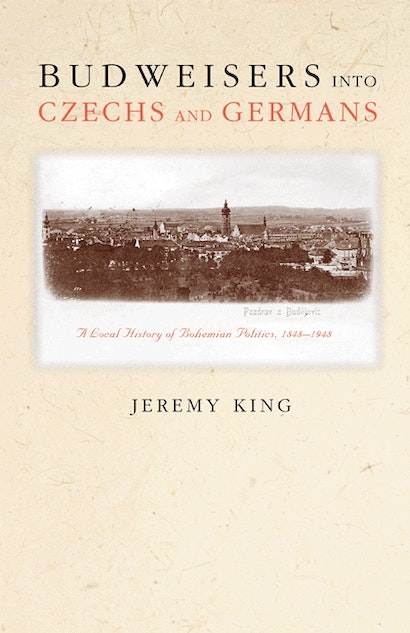 This history of a single town in Bohemia casts new light on nationalism in Central Europe between the Springtime of Nations in 1848 and the Cold War. Jeremy King tells the story of both German and Czech-speaking Budweis/Budæjovice, which belonged to the Habsburg Monarchy until 1918, and then to Czechoslovakia, Hitler’s Third Reich, and Czechoslovakia again. Residents, at first simply “Budweisers,” or Habsburg subjects with mostly local loyalties, gradually became Czechs or Germans. Who became Czech, though, and who German? What did it mean to be one or the other?


In answering these questions, King shows how an epochal, region-wide contest for power found expression in Budweis/Budæjovice not only through elections but through clubs, schools, boycotts, breweries, a remarkable constitutional experiment, a couple of riots, and much more. In tracing the nationalization of politics from small and sometimes comic beginnings to the genocide and mass expulsions of the 1940s, he also rejects traditional interpretive frameworks. Writing not a national history but a history of nationhood, both Czech and German, King recovers a nonnational dimension to the past. Embodied locally by Budweisers and more generally by the Habsburg state, that dimension has long been blocked from view by a national rhetoric of race and ethnicity. King’s Czech-Habsburg-German narrative, in addition to capturing the dynamism and complexity of Bohemian politics, participates in broader scholarly discussions concerning the nature of nationalism.

Jeremy King is Associate Professor in the Department of History at Mount Holyoke College.

"[A] highly intelligent and admirably researched study. . . . [King] is intent on mapping a new vision of the region's history, freed from its national blinkers."—Steven Beller, Times Literary Supplement

"There is no other local or regional history of national identification for the Habsburg monarchy with the same chronological scope and sophisticated analysis as King's."—Gary B. Cohen, International History Review

"An important study of local history in a region of Europe where many have feared to tread. . . . [This book] is quite readable and represents a major scholarly contribution to the study of nation-building."—Jack R. Dukes, History: Reviews of New Books

"[T]he most important book to appear in the fields of Austrian, Habsburg, or Bohemian history in the last twenty years."—Pieter M. Judson, Social History

"[A] wonderfully reflective book. . . . [King's] rendering of the complex national struggles is remarkably detached and empathetic at the same time, which is made particularly convincing by his elegant and respectful style of writing. Most remarkably, he depicts the role of the Habsburg rulers in a new, essentially positive light."—Diethelm Prowe, German Studies Review

"The main direction of King's argument—and the book's real contribution—is to illuminate the political dimension and origins of nationalism. . . . It is a complex story, told very engagingly. Written in a fresh style that avoids jargon and 'insiderisms,' the book will surely offer much of use to novices and well read experts alike."—Karl F. Bahm, Austrian History Yearbook

"Engagingly written and convincingly argued, this volume should command a wide audience. . . . This exemplary study is the standard by which local studies and political histories of the monarchy will be judged for years to come."—Nancy M. Wingfield, Central European History

"This work is an exhaustively researched, well written, and highly interesting account of ethnic relations in a typically multiethnic Central European city, which suggests an interesting. . . new perspective on the relationship of ethnicity and the modern state."—Carol A. Leibiger, Seminar

"King provides a compelling narrative of nation building in a single Central European town. The story is told engagingly and with a rare freshness of style. King shows a masterful command over an impressive range of primary sources and exploits it fully in charting and interpreting the dynamics of nation building at the micro level within its larger historical setting."—David F. Good, University of Minnesota

"This book makes a significant contribution to a very active scholarly field. It is particularly welcome for the way it focuses on nationalism in one of those places that western European historians like to avoid because of the muddled and messy nature of identities in them. This will be an important book."—Celia Applegate, University of Rochester