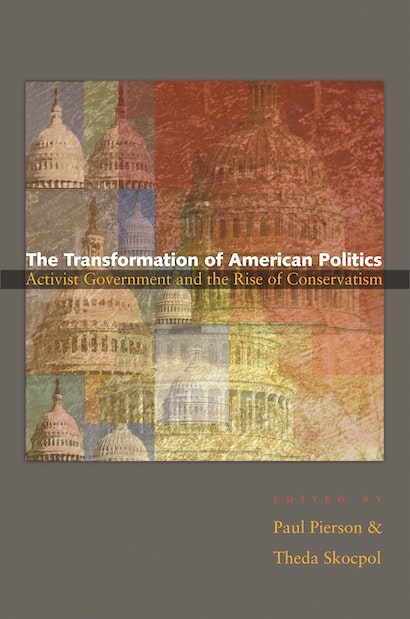 The contemporary American political landscape has been marked by two paradoxical transformations: the emergence after 1960 of an increasingly activist state, and the rise of an assertive and politically powerful conservatism that strongly opposes activist government. Leading young scholars take up these issues in The Transformation of American Politics. Arguing that even conservative administrations have become more deeply involved in managing our economy and social choices, they examine why our political system nevertheless has grown divided as never before over the extent to which government should involve itself in our lives.


The contributors show how these two closely linked trends have influenced the reform and running of political institutions, patterns of civic engagement, and capacities for partisan mobilization — and fueled ever-heightening conflicts over the contours and reach of public policy. These transformations not only redefined who participates in American politics and how they do so, but altered the substance of political conflicts and the capacities of rival interests to succeed. Representing both an important analysis of American politics and an innovative contribution to the study of long-term political change, this pioneering volume reveals how partisan discourse and the relationship between citizens and their government have been redrawn and complicated by increased government programs.

Paul Pierson holds the Avice Saint Chair of Public Policy at the University of California, Berkeley. Theda Skocpol is the Victor S. Thomas Professor of Government and Sociology at Harvard University.

"This smart collection of essays, unlike most such compilations, is as coherent as the title advertises."—Andrew Hartman, Michigan Historical Review

"I would recommend this book to everyone who is interested in the geological history of our planet. . . . The book is written in an easy and understandable language."—Ekologija

"This excellent volume is recommended for all scholars of conservatism and anyone who studies the American national government, particularly American political development scholars interested in state building and transformation."—Richard J. Meagher, The Americas

"This book offers a remarkably wide-ranging analysis of the politics of conservatism from some of the best and brightest. This book stands out for charting the impact of political conservatism on voting and elections and its reshaping of voluntary associations, pressure groups, and government institutions and policy."—Lawrence R. Jacobs, University of Minnesota

"The Transformation of American Politics has so much going for it. The contributors to this volume are well-known experts in their fields. There are obvious and important connections among the chapters, adding to the coherence of the whole. The volume effectively shows how historical perspectives can shed light not just on eras long ago but on contemporary debates. It's a winner."—Christopher Howard, author of The Welfare State Nobody Knows