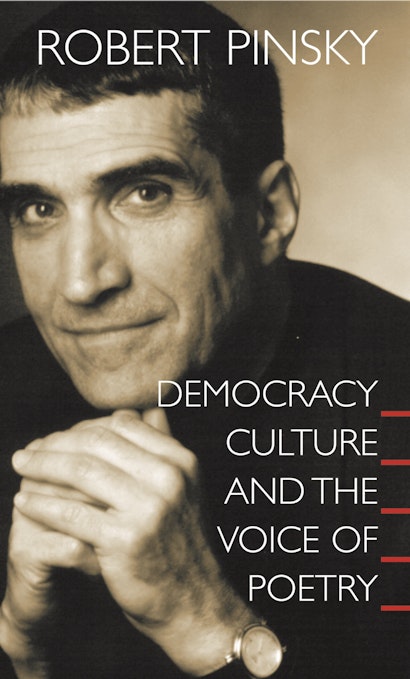 The place of poetry in modern democracy is no place, according to conventional wisdom. The poet, we hear, is a casualty of mass entertainment and prosaic public culture, banished to the artistic sidelines to compose variations on insipid themes for a dwindling audience. Robert Pinsky, however, argues that this gloomy diagnosis is as wrongheaded as it is familiar. Pinsky, whose remarkable career as a poet itself undermines the view, writes that to portray poetry and democracy as enemies is to radically misconstrue both. The voice of poetry, he shows, resonates with profound themes at the very heart of democratic culture.


There is no one in America better to write on this topic. One of the country’s most accomplished poets, Robert Pinsky served an unprecedented two terms as America’s Poet Laureate (1997-2000) and led the immensely popular multimedia Favorite Poem Project, which invited Americans to submit and read aloud their favorite poems. Pinsky draws on his experiences and on characteristically sharp and elegant observations of individual poems to argue that expecting poetry to compete with show business is to mistake its greatest democratic strength — its intimate, human scale — as a weakness.


As an expression of individual voice, a poem implicitly allies itself with ideas about individual dignity that are democracy’s bedrock, far more than is mass participation. Yet poems also summon up communal life.. Even the most inward-looking work imagines a reader. And in their rhythms and cadences poems carry in their very bones the illusion and dynamic of call and response. Poetry, Pinsky writes, cannot help but mediate between the inner consciousness of the individual reader and the outer world of other people. As part of the entertainment industry, he concludes, poetry will always be small and overlooked. As an art — and one that is inescapably democratic — it is massive and fundamental.

Robert Pinsky, who served as Poet Laureate of the United States, 1997-2000, is the author of many books, including: Jersey Rain, Americans' Favorite Poems, Poems to Read, The Sounds of Poetry, The Handbook of Heartbreak, The Inferno of Dante: A New Verse Translation, among others, and three works published by Princeton: An Explanation of America; The Situation of Poetry; and Sadness and Happiness. He is Professor of English and Creative Writing at Boston University. This book emerged from the Tanner Lectures that he delivered at Princeton's University Center for Human Values in 2001.

"An engaging analysis of the way the intimate rhythms of American poetry invoke a social presence. Pinsky, a former poet laureate, passionately argues that American poetry is driven by the anxiety of being forgotten; the solitary poet makes us aware of the presence of others as he yearns for their approval while striving to preserve his uniqueness. . . . He concludes that only through the individual reader does a poem reach full bloom."—Natalya Sukhonos, New York Times Book Review

"Pinsky argues forcefully that poetry has not been rendered obsolete by globalization, commercialization, and technological advance; instead, poetry is more necessary than ever, as it gives voice to the individual."—Library Journal

"One is never in any doubt about the tendency of Pinsky's argument. He urges appreciation not of what the poet does in writing a poem, but of what the poet does in reading it. The poet mainly counts as one more reader. So, too, Pinsky's idea of the place of poetry in democratic culture comes from an image of someone reading a poem to an audience."—David Bromwich, The New Republic

"Pinsky . . . champions the importance of each individual whose breath creates or carries a poem, without which society would be nonexistent."—Alexandra Yurovsky, San Francisco Chronicle

"Pinsky's conception of the poet as citizen—not legislator, but something between town crier, parson, and fool on the hill—gives us hope that the cultivation of a shared memory will, in time, make us a people"—Jonathan Galassi

"Pinsky's startlingly original thesis—that democracy's contradictory drive toward monadic individualism and mass conformity is echoed, and resolved, in the parallel tension between the solitary practice of poetry and the collective invocation of its voice—is itself a cultural event of major significance. In showing how poetry, by its mimetic embodiment, artfully resists and engages our demotic cultural dilemma, he sharply defines the moral and social place of poetry for our times. His model of internal cultural analysis will inform and delight both poet and reader, humanists as well as social scientists. This is perhaps the most important discourse on cultural analysis by a major poet since Eliot's Notes Towards the Definition of Culture."—Orlando Patterson, Harvard University

"Robert Pinsky has produced a fine, lean book on a very large topic. With fresh and compelling arguments, Pinsky writes that poetry has a significant role to play in a mass-democracy, that American poetry has produced extraordinary art, and that this genre has truly engaged with the challenge to traditional art forms raised by democratic revolutions."—Robert von Hallberg, University of Chicago

"An important contribution to our thinking about the place of poetry in American life. No one could be more qualified to speak on this subject than Robert Pinsky, who combines extraordinary gifts as a poet, critic, and public ambassador for the art. The book is full of provocative thought and sharp observations about poems and responses to poetry."—Paul Breslin, Northwestern University