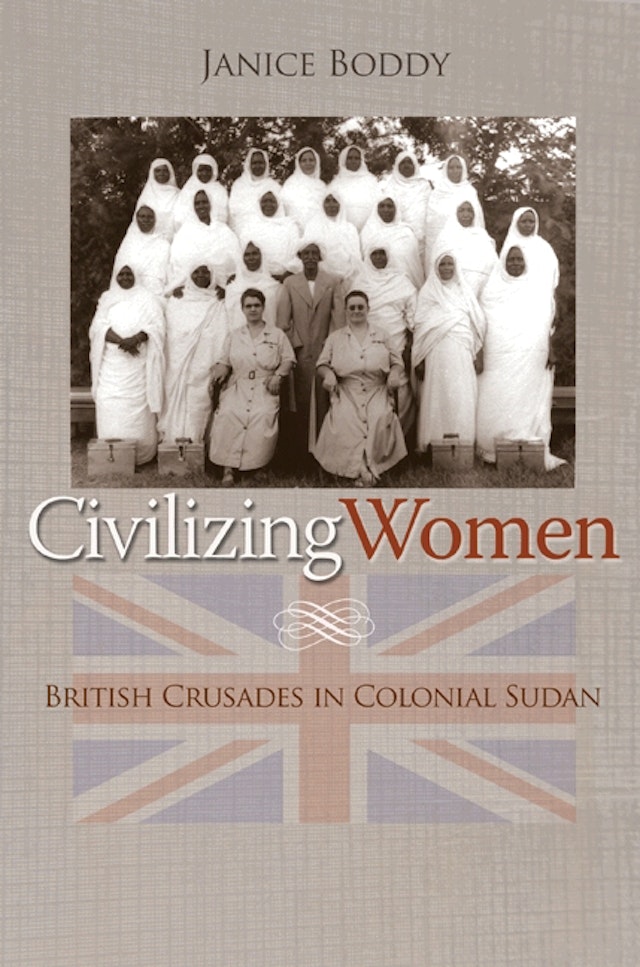 Civilizing Women is a riveting exploration of the disparate worlds of British colonial officers and the Muslim Sudanese they sought to remake into modern imperial subjects. Focusing on efforts to stop female circumcision in the Anglo-Egyptian Sudan between 1920 and 1946, Janice Boddy mines colonial documents and popular culture for ethnographic details to interleave with observations from northern Sudan, where women’s participation in zâr spirit possession rituals provided an oblique counterpoint to colonial views.


Written in engaging prose, Civilizing Women concerns the subtle process of “colonizing selfhood,” the British women who undertook it, and those they hoped to reform. It suggests that efforts to suppress female circumcision were tied to the continuation of slavery and the rise of commercial cotton growing in Sudan, as well as to concerns about infant mortality and maternal health. Boddy traces maneuverings among political officers, teachers, missionaries, and medical personnel as they pursued their elusive goal, and describes their fraught relations with Egypt, Parliament, the Foreign Office, African nationalists, and Western feminists. In doing so, she sounds a cautionary note for contemporary interventionists who would flout local knowledge and belief.

Janice Boddy is Professor and Chair of the Department of Anthropology at the University of Toronto. She is the author of Wombs and Alien Spirits: Women, Men, and the Zâr Cult in Northern Sudan and coauthor of Aman: The Story of a Somali Girl (Random House), which has been translated into fourteen languages.

"Boddy sounds a cautionary note for contemporary interventionists who would flout local knowledge and belief."—Frauen Solidaritat

"The book's most important contribution is the documentation of the development of midwifery training schools and their linkage to the control of women's bodies. This is the core of Boddy's argument, and she has done an exceptional job of organizing and presenting the colonial administration's political-cultural imperatives for the development of these schools."—Carolyn Fluehr-Lobban, Journal of Middle East Women's Studies

"In this original and meticulous work of historical ethnography, Janice Boddy deftly offers an acute analysis of imperial ambition and the gendering of policy on both sides of the colonial divide, as well as some wryly observed lessons for 'civilizing missions' of the present day. This is a major contribution that will change the terms of debate."—Michael Lambek, author of The Weight of the Past: Living with History in Mahajanga, Madagascar

"Janice Boddy's Civilizing Women is a sensitive and superbly researched exploration of issues in the history of British-Sudanese relations that resonate strongly with the present. Focusing on the way that the British attempted to reform the personal lives of northern Sudanese women through introducing modern hygiene, health, and family morals, she illuminates a whole social world. Based on many years of firsthand research in the Sudan and on archival sources, this book probes the silent zones of gender relations and the inequalities of imperial power in a new way."—Wendy James, University of Oxford

"This very well-written book marks the first sustained attempt to look at gender in the Sudanese historical record and to ground the history of Condominium rule in a broader cultural framework."—Susan M. Kenyon, author of Five Women of Sennar: Culture and Change in Central Sudan

"Engaging and detailed, Civilizing Women creates a lively picture of events, places, people. Scholars interested in the Sudan, as well as colonial Africa more generally, will find this work invaluable. Janice Boddy sets a new standard for colonial studies by anthropologists—she seems to have combed every inch of the archives in both the United Kingdom and Sudan, and the material comes to life through her artful prose."—Lesley A. Sharp, author of The Sacrificed Generation: Youth, History, and the Colonized Mind in Madagascar