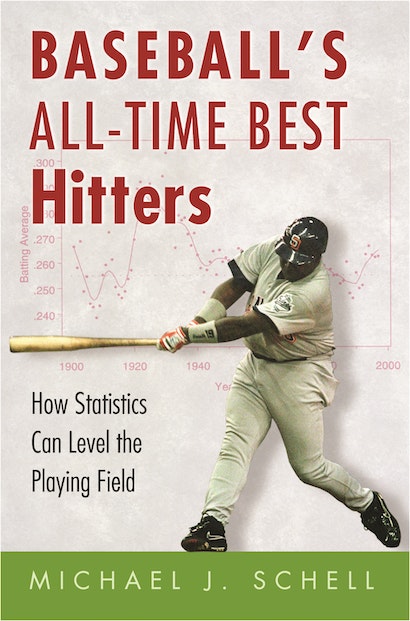 Tony Gwynn is the greatest hitter in the history of baseball. That’s the conclusion of this engaging and provocative analysis of baseball’s all-time best hitters. Michael Schell challenges the traditional list of all-time hitters, which places Ty Cobb first, Gwynn 16th, and includes just 8 players whose prime came after 1960. Schell argues that the raw batting averages used as the list’s basis should be adjusted to take into account that hitters played in different eras, with different rules, and in different ballparks. He makes those adjustments and produces a new list of the best 100 hitters that will spark debate among baseball fans and statisticians everywhere.


Schell combines the two qualifications essential for a book like this. He is a professional statistician — applying his skills to cancer research — and he has an encyclopedic knowledge of baseball. He has wondered how to rank hitters since he was a boy growing up as a passionate Cincinnati Reds fan. Over the years, he has analyzed the most important factors, including the relative difficulty of hitting in different ballparks, the length of hitters’ careers, the talent pool that players are drawn from, and changes in the game that raised or lowered major-league batting averages (the introduction of the designated hitter and changes in the height and location of the pitcher’s mound, for example). Schell’s study finally levels the playing field, giving new credit to hitters who played in adverse conditions and downgrading others who faced fewer obstacles. His final ranking of players differs dramatically from the traditional list. Gwynn, for example, bumps Cobb to 2nd place, Rod Carew rises from 28th to 3rd, Babe Ruth drops from 9th to 16th, and Willie Mays comes from off the list to rank 13th. Schell’s list also gives relatively more credit to modern players, containing 39 whose best days were after 1960.


Using a fun, conversational style, the book presents a feast of stories and statistics about players, ballparks, and teams — all arranged so that calculations can be skipped by general readers but consulted by statisticians eager to follow Schell’s methods or introduce their students to such basic concepts as mean, histogram, standard deviation, p-value, and regression. Baseball’s All-Time Best Hitters will shake up how baseball fans view the greatest heroes of America’s national pastime.

Michael Schell is Professor of Biostatistics at the University of North Carolina and Director of the Biostatistics Core Facility at the Lineberger Comprehensive Cancer Center. He is the author of Baseball's All-Time Best Sluggers: Adjusted Batting Performance from Strikeouts to Home Runs (Princeton) and has published more than 100 research articles on statistics and cancer.

"[Schell] has provided a wealth of baseball trivia and statistics. The style of writing is engaging and often lively and, in fact, encourages continued debate over the data and conclusions presented. The text will undoubtedly become a part of the baseball statistics fan's library."—Randall J. Swift, Mathematical Association of America Online Book Review

"Buried deep within every true baseball fan is a nerd with a scorecard and a calculator. . . . To refute those who say players from different eras can't be compared because they played in different circumstances, Schell levels the playing field by building models to account for those varying circumstances: ballparks, pitching quality, night games, etc. . . . His conclusions are often surprising but well substantiated."—Booklist

"[Schell] ranks current player Tony Gwynn as the best all-time hitter, well ahead of the modern batting king, Ted Williams, and no doubt outraging the ghosts of Ty Cobb and Babe Ruth. . . . All in all, this book is for the hardcore baseball fan."—Library Journal

"This is a provocative new look at baseball's best hitters, using a sound statistical approach. It's a `must read' for anyone who loves our national pastime."—Pete Palmer, coauthor of Total Baseball and The Hidden Game of Baseball.

"This book makes a significant contribution to baseball statistics and will also have the side-effect of getting readers interested in statistical reasoning and in how statistics can be used to clarify comparisons."—Carl Morris, Harvard University