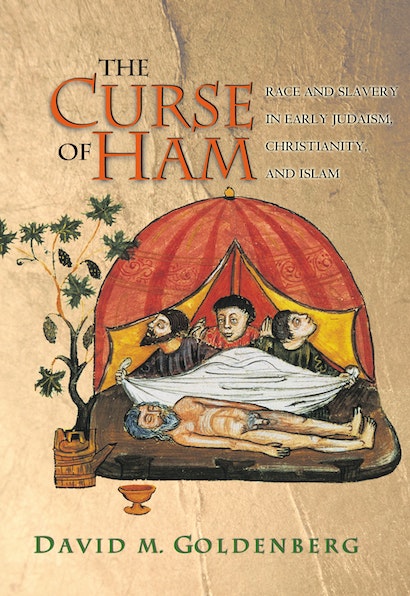 How old is prejudice against black people? Were the racist attitudes that fueled the Atlantic slave trade firmly in place 700 years before the European discovery of sub-Saharan Africa? In this groundbreaking book, David Goldenberg seeks to discover how dark-skinned peoples, especially black Africans, were portrayed in the Bible and by those who interpreted the Bible — Jews, Christians, and Muslims. Unprecedented in rigor and breadth, his investigation covers a 1,500-year period, from ancient Israel (around 800 B.C.E.) to the eighth century C.E., after the birth of Islam. By tracing the development of anti-Black sentiment during this time, Goldenberg uncovers views about race, color, and slavery that took shape over the centuries — most centrally, the belief that the biblical Ham and his descendants, the black Africans, had been cursed by God with eternal slavery.


Goldenberg begins by examining a host of references to black Africans in biblical and postbiblical Jewish literature. From there he moves the inquiry from Black as an ethnic group to black as color, and early Jewish attitudes toward dark skin color. He goes on to ask when the black African first became identified as slave in the Near East, and, in a powerful culmination, discusses the resounding influence of this identification on Jewish, Christian, and Islamic thinking, noting each tradition’s exegetical treatment of pertinent biblical passages.


Authoritative, fluidly written, and situated at a richly illuminating nexus of images, attitudes, and history, The Curse of Ham is sure to have a profound and lasting impact on the perennial debate over the roots of racism and slavery, and on the study of early Judaism, Christianity, and Islam.

David M. Goldenbergis Isidore and Theresa Cohen Chair of Jewish Religion and Thought at the University of Cape Town, and Visiting Scholar at the University of Pennsylvania. He was formerly President of Dropsie College for Hebrew and Cognate Learning, Associate Director of the Annenberg Research Institute for Judaic and Near Eastern Studies, and Editor of The Jewish Quarterly Review.

"[A] sweeping and ambitious work. . . . [T]he research is meticulous and important."—Publishers Weekly

"Goldenberg's study is clearly a work of mature scholarship on an important theme. . . He writes in an accessible style and makes complex matters intelligible to nonspecialists. In fact, I often became so engrossed in his argument that I thought I was reading a detective story."—Daniel J Harrington, America

"Goldenberg has produced what may well become the definitive study of race and slavery in the Old Testament texts. . . . In a work particularly valuable for its comprehensiveness and philology, Goldenberg's research is monumental; the writing is clear as a bell; the arguments are not only cogent, but honest. . . . In short, this is a wonderful book and I hope that it finds many readers."—Molly Myerowitz Levine, Bryn Mawr Classical Review

"For so massively erudite a work this book is remarkably accessible. Goldenberg is sufficiently persuaded of the importance of the case he is making- that the Bible does not measure people's worth by the color of their skin—not to encumber the main body of his book with the kind of extended academic argument in whose thickets most readers would soon be lost. . . . [He has a] conviction that a scholarly work, if it has something important to say, should not be just for scholars."—John Pridmore, Church Times

"An outstanding and comprehensive study."—Choice

"[A] masterly book. . . . With scrupulously meticulous and erudite scholarship, Goldenberg examines a plethora of source material and is a competent and assured guide through this labyrinth."—Desmond Tutu, Times Higher Education Supplement

"The Curse of Ham will clearly have a significant impact on the perennial debate over the roots of racism and slavery and on the study of early Judaism, Christianity and Islam. My view is that this volume ought to be required reading for all Black scholars. Biblical exegetes, theologians and clergy will all find this a valuable resource."—Michael N. Jagessar, Black Theology

"[This] book is the result of thirteen years of steady research and presents what is often highly technical scholarship and linguistic analysis in a readable, cogent manner. . . .The Curse of Ham represents an important step towards increasing the ability of those who view the Bible as scripture to avoid continuing this error."—Stirling Adams, BYU Studies

"Goldenberg has delved into the murky story which forms the focus of Genesis, Chapter 9: Noah's emergence from the flood, his drunken stupor, and his subsequent embarrassment at his son Ham's viewing of his nakedness. This is not only a meticulously documented work but an extraordinarily well-written inquiry...His purpose is to ascertain how this verse was transformed from a curse directed at Ham's son to a blanket condemnation of an entire race."—Arnold Ages, Chicago Jewish Star

"A truly stunning work and a masterpiece of its kind. David Goldenberg goes far beyond anyone else in offering the most comprehensive, convincing, and important analysis I've read on interpretations of the famous Curse and, generally, of blackness and slavery. His research is breathtaking. It yields almost definitive answers to many longstanding debates over early attitudes toward dark skin."—David Brion Davis, Yale University, author of In the Image of God: Religion, Moral Values, and Our Heritage of Slavery

"A great book on a great topic. It is great both for what it does and what it does not do. What it does is to survey, consider, annotate, and analyze every Jewish text that refers to, or can be thought to refer to, black/dark skin or Black Africans. And yet it does not engage in polemics or apologetics."—Shaye J. D. Cohen, Harvard University, author of The Beginnings of Jewishness