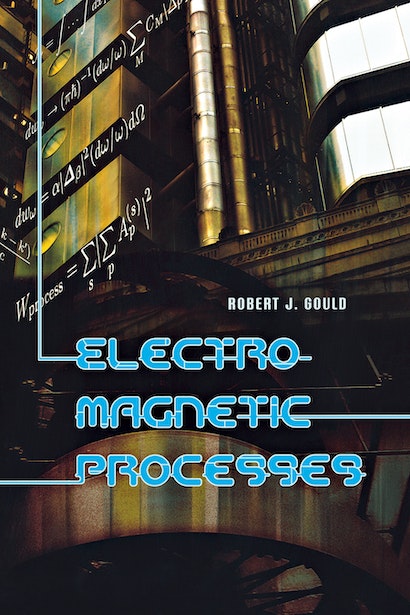 This book provides an understanding of the theoretical foundations for the calculation of electromagnetic processes. Photon production processes are particularly important in astrophysics, since almost all of our knowledge of distant astronomical objects comes from the detection of radiation from these sources. Further, the conditions therein are extremely varied and a wide variety of naturally occurring electromagnetic phenomena can be described by limiting forms of the basic theory.


The first chapter reviews some basic principles that are the underpinnings for a general description of electromagnetic phenomena, such as special relativity and, especially, relativistic covariance. Classical and quantum electrodynamics (QED) are then formulated in the next two chapters, followed by applications to three basic processes (Coulomb scattering, Compton scattering, and bremsstrahlung). These processes are related to other phenomena, such as pair production, and the comparisons are discussed.


A unique feature of the book is its thorough discussion of the nonrelativistic limit of QED, which is simpler than the relativistic theory in its formulation and applications. The methods of the relativistic theory are introduced and applied through the use of notions of covariance, to provide a shorter path to the more general theory. The book will be useful for graduate students working in astrophysics and in certain areas of particle physics.

Robert J. Gould is Research Professor of Physics at the University of California, San Diego. His research focuses on atomic, nuclear, and particle processes; statistical mechanics; and applications of astrophysics.

"A remarkable intellectual achievement Few books make such a valiant and successful effort to explain the physics of these processes. This book fills an important gap in the literature."—Malcolm Longair, Cambridge University

"An excellent, well-written, and well-organized discourse that has a worthy place in the literature. It will provide a valuable graduate teaching and reference work for physicists and astrophysicists for years to come."—Matthew Baring, Rice University

"Solid and rich in physics. A very useful book for anyone interested in the physics of astrophysics."—David Spergel, Princeton University

"This is a clearly written and comprehensive book on electromagnetic processes by one of the leading experts in this area. The book covers both classical and quantum processes and discusses the relativistic and nonrelativistic limits. Both graduate students and researchers interested in the underlying processes by which radiation is produced will find Gould's book to be both easily understandable and extremely useful."—George Blumenthal, University of California, Santa Cruz

"Electromagnetic Processes is a lucid exposition of the physics that is fundamental for much of modern physics. Since our entire observational understanding of the universe thus far relies on such processes, this book is a timely addition to the lexicon for astronomy and astrophysics, for which its clear exposition of Compton scattering in the relativistic limit, for example, provides a welcome addition to the literature. Gould has wisely chosen to use cgs units, which makes its applications and familiarity to the astrophysicist that much more direct. Gould writes in a clear and complete style, with interesting historical notes to complement and accent the derivations. This book fills the gap between Jackson and Rybicki and Lightman and will serve both reference and textbook needs."—Jonathan E. Grindlay, Robert Treat Paine Professor of Astronomy, Harvard University

"Electromagnetic Processes fills an important niche in the spectrum of advanced texts on radiation processes for graduate students and professional astrophysicists. Gould provides a clear connection between classical and quantum treatments of basic processes like Compton scattering and bremsstrahlung, in both the non-relativistic and relativistic regimes. Standard texts generally provide a sketchy overview of the QED corrections, while books on QED itself are often difficult to weed through for the needed formulae. I highly recommend this book for those seeking a more complete overview of the basic physics of the interaction of radiation with charged particles."—Steven M. Kahn, Stanford University

"Electromagnetic Processes succeeds brilliantly in providing a unified treatment of the foundations of classical and quantum electrodynamics with clarity and scholarship and highlighting the intellectual beauty of the subject. This is the book to which students and researchers will turn as they struggle to solve problems in the countless applications of electrodynamics."—Roger Blandford, Stanford University