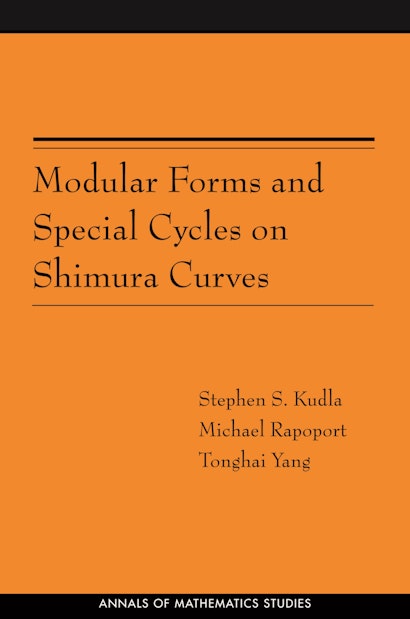 Modular Forms and Special Cycles on Shimura Curves is a thorough study of the generating functions constructed from special cycles, both divisors and zero-cycles, on the arithmetic surface “M” attached to a Shimura curve “M” over the field of rational numbers. These generating functions are shown to be the q-expansions of modular forms and Siegel modular forms of genus two respectively, valued in the Gillet-Soulé arithmetic Chow groups of “M”. The two types of generating functions are related via an arithmetic inner product formula. In addition, an analogue of the classical Siegel-Weil formula identifies the generating function for zero-cycles as the central derivative of a Siegel Eisenstein series. As an application, an arithmetic analogue of the Shimura-Waldspurger correspondence is constructed, carrying holomorphic cusp forms of weight 3/2 to classes in the Mordell-Weil group of “M”. In certain cases, the nonvanishing of this correspondence is related to the central derivative of the standard L-function for a modular form of weight 2. These results depend on a novel mixture of modular forms and arithmetic geometry and should provide a paradigm for further investigations. The proofs involve a wide range of techniques, including arithmetic intersection theory, the arithmetic adjunction formula, representation densities of quadratic forms, deformation theory of p-divisible groups, p-adic uniformization, the Weil representation, the local and global theta correspondence, and the doubling integral representation of L-functions.

"This book represents a major milestone for research at the intersection of arithmetic geometry and automorphic forms. The results will shape the research in this area for some time to come."—Jens Funke, Mathematical Reviews