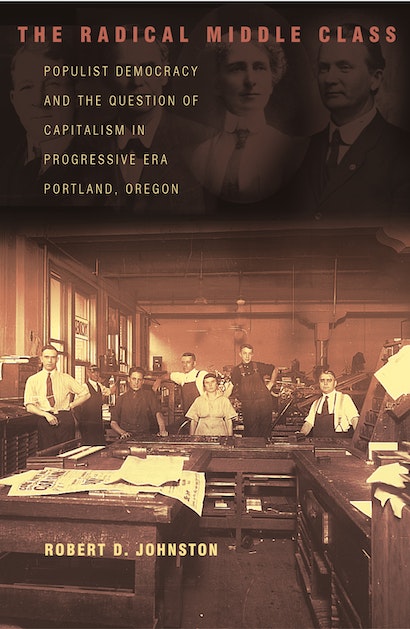 America has a long tradition of middle-class radicalism, albeit one that intellectual orthodoxy has tended to obscure. The Radical Middle Class seeks to uncover the democratic, populist, and even anticapitalist legacy of the middle class. By examining in particular the independent small business sector or petite bourgeoisie, using Progressive Era Portland, Oregon, as a case study, Robert Johnston shows that class still matters in America. But it matters only if the politics and culture of the leading player in affairs of class, the middle class, is dramatically reconceived.


This book is a powerful combination of intellectual, business, labor, medical, and, above all, political history. Its author also humanizes the middle class by describing the lives of four small business owners: Harry Lane, Will Daly, William U’Ren, and Lora Little. Lane was Portland’s reform mayor before becoming one of only six senators to vote against U.S. entry into World War I. Daly was Oregon’s most prominent labor leader and a onetime Socialist. U’Ren was the national architect of the direct democracy movement. Little was a leading antivaccinationist.

The Radical Middle Class further explores the Portland Ku Klux Klan and concludes with a national overview of the American middle class from the Progressive Era to the present. With its engaging narrative, conceptual richness, and daring argumentation, it will be welcomed by all who understand that reexamining the middle class can yield not only better scholarship but firmer grounds for democratic hope.

Robert D. Johnston is Director of the Teaching of History Program at the University of Illinois at Chicago.

"[A] magnificent work of political and historical reconstruction. . . . The excitement of this book lies in its engaging combination of passion and rigor."—Jeffrey Sklansky, Reviews in American History

"The Radical Middle Class credits the lower middle class with providing the leadership and grassroots support for a variety of reform and even radical measures that animated politics in Portland, Oregon during the first quarter of the twentieth century. . . . Johnston has presented scholars with another template of reform that needs to be taken seriously and applied elsewhere.""—John F. Reynolds, H-SHGAP

"If progressives are to enjoy any success rebuilding a democratic populism that questions a corporate political economy, Johnston's book might suggest some useful (and hopeful) perspectives."—Ken Fones-Wolf, Enterprise & Society

"[An] extraordinarily ambitious work. . . . Sure to spark debate, this book is a fine example of the renaissance in political history."—Ron Formisano, Journal of Southern History

"[F]ew interested in the history of American social movements, the political role of the middle class, or the contemporary revival of populist politics will fail to find this book insightful and provocative."—Daniel Geary, Labor: Studies in Working-Class History of the Americas

"[An] exhaustive and illuminating critique of the historiography of the petit bourgeoisie. . . . Robert D. Johnston has convinced this reviewer that we need to know much more about this crucial middling group and the impact it has had, and continues to have, on U.S. politics as both a local and national force. Historians need to take the lead this book provides."—Adam J. Hodges, H-Net Reviews

"A historical tour de force of the Progressive era in a middle class city, Professor Johnston's book will begin to unravel the stultifying stereotyping of the middle classes and remove cobwebs of inaction from the minds of today's civic organizers and thinkers."—Ralph Nader

"This is one of the most original, provocative, and imaginative works about the modern U.S. that I have read in years. Johnston has produced far more than a splendid history about the neglected politics of a neglected city. His book is studded with insights about what it meant and means to be middle class and the fecund nature of populism in industrial and post-industrial America. What is more, he gives us hope for the future."—Michael Kazin, Georgetown University, author of The Populist Persuasion: An American History

"Johnston's daring, meticulous, subtle, and analytically acute study of Portland's lower middle class leaves hundreds of shallow and condescending cliches about the petite bourgeoisie mortally wounded or gasping for breath in its splendid wake. He succeeds in restoring the historical autonomy, particularity, and egalitarian moral economy of America's lower middle classes. As with E.P. Thompson's history of the English working class, subsequent work on the middle class in America must now take this study as its point of departure."—James C. Scott, author of Seeing Like a State

"Johnston seizes the Progressive Era and gives it back to the people. He argues that the roots of reform flourished among average citizens, those who thought that they could change the world by reasoning and voting together. This is a book about democracy at its best. Johnston recalls America's potential and underscores the paramount importance of civic activism on the local level."—Glenda E. Gilmore, editor of Who Were the Progesssives? and author of Gender and Jim Crow

"In this very exciting study, Johnston has truly broken new ground. For all its theoretical sophistication, the book is written with flair and is blessedly free of arcane jargon. The prose is clear, powerful, and even jaunty at times. The Radical Middle Class will become one of those rare and important books that no scholar of U.S. class relations and politics will be able to ignore."—Elaine Tyler May, author of Homeward Bound: American Families in the Cold War Era

"Robert Johnston has written a terrific book, engaging one of the most neglected and important topics in U.S. history: the political history of the middle class. More successful than some of his predecessors, he gives middle-class Americans the history they so richly deserve. Powerfully argued, splendidly told, and provocatively fresh, The Radical Middle Class marks a milestone in the historiography of the American middle class. It is really the first book of its kind."—Sven Beckert, Harvard University, author of The Monied Metropolis: New York City and the Consolidation of the American Bourgeoisie