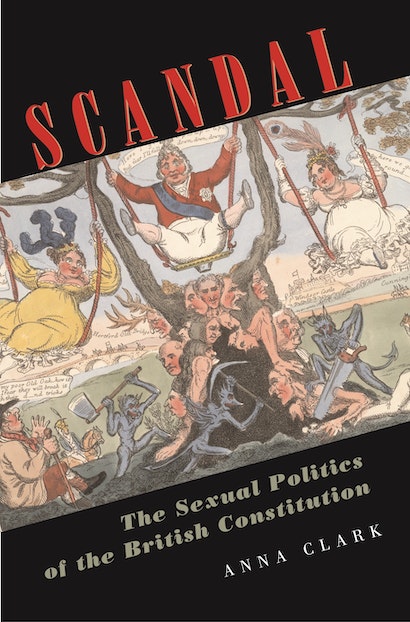 Are sex scandals simply trivial distractions from serious issues or can they help democratize politics? In 1820, George IV’s “royal gambols” with his mistresses endangered the Old Oak of the constitution. When he tried to divorce Queen Caroline for adultery, the resulting scandal enabled activists to overcome state censorship and revitalize reform. Looking at six major British scandals between 1763 and 1820, this book demonstrates that scandals brought people into politics because they evoked familiar stories of sex and betrayal. In vibrant prose woven with vivid character sketches and illustrations, Anna Clark explains that activists used these stories to illustrate constitutional issues concerning the Crown, Parliament, and public opinion.


Clark argues that sex scandals grew out of the tension between aristocratic patronage and efficiency in government. For instance, in 1809 Mary Ann Clarke testified that she took bribes to persuade her royal lover, the army’s commander-in-chief, to promote officers, buy government offices, and sway votes. Could women overcome scandals to participate in politics?


This book also explains the real reason why the glamorous Georgiana, Duchess of Devonshire, became so controversial for campaigning in a 1784 election. Sex scandal also discredited Mary Wollstonecraft, one of the first feminists, after her death.


Why do some scandals change politics while others fizzle? Edmund Burke tried to stir up scandal about the British empire in India, but his lurid, sexual language led many to think he was insane.


A unique blend of the history of sexuality and women’s history with political and constitutional history, Scandal opens a revealing new window onto some of the greatest sex scandals of the past. In doing so, it allows us to more fully appreciate the sometimes shocking ways democracy has become what it is today.

Anna Clark Professor of History at the University of Minnesota, and the editor of the Journal of British Studies. She is the author of The Struggle for the Breeches: Gender and the Making of the British Working Class, which won the British Council Book Prize of the North American Conference on British Studies. She is also the author of many other works in the field of British history, gender history, and the history of sexuality.

"Between 1760 and 1820, scandal was a serious business, for both press and politicians, so it is appropriate for a historian to take it seriously now. Anna Clark . . . brings important issues of political history from the margins to the centre. The real scandal, as this book shows, lay in the much-vaunted British constitution, which concentrated power in political and social elites while leaving the mass of the people, especially women, without representation."—Norma Clarke, Times Literary Supplement

"Scandal is a serious and well-researched academic study. . . . An interesting and informative book."—Library Journal

"Clark's fascinating book explores English political scandals . . . during the period 1760 to 1820. . . . [T]his is a rich and important work, a fine example of the new political history that is certain to stimulate thinking not only about Hanoverian scandal but also about the significance—and the some times progressive consequences—of political scandal in the modern world."—Alastair Bellany, American Historical Review

"Anna Clark has pioneered research on sex, scandal, and democracy. Here she shows why scandal is not just engaging, nay fascinating, but how sexual politics is important to power, to political discourse, and the constitution, how it disturbs the fiction of public and private, and how it connects with the contradictions of everyday life-the life that we all live."—Beatrix Campbell, writer and broadcaster, author of Diana, Princess of Wales: How Sexual Politics Shook the Monarchy

"In this original and engaging work, we are shown a series of detailed, gripping scandals and how they were instrumental in shaping the world of Georgian politics and in laying the ground for Britain's move toward a modern democracy. The stories are vividly told-the actors move across the stage in all their flawed humanity. Clark's insights into the reforming of acceptable masculine and feminine behavior and the role of sexual innuendo in struggles for power are particularly original. With the publication of Scandal, all types of political scandal, including those based on or attributed to what current opinion defines as sexual misdemeanors, will have to be taken with the seriousness they deserve, no longer written off as the quaint by-ways of history."—Leonore Davidoff, coauthor of Family Fortunes: Men and Women of the English Middle Class 1780-1850

"In her fresh and exciting study, Anna Clark reframes a set of well-known episodes in British political history during the reign of George III and the Regency period. Combining political, cultural, and gender history, she demonstrates in superb fashion the importance of scandal, particularly sexual scandal, to understanding the politics of the age. Clark has written a work of originality that deserves a wide readership."—James Epstein, author of In Practice: Studies in the Language and Culture of Popular Politics in Modern Britain