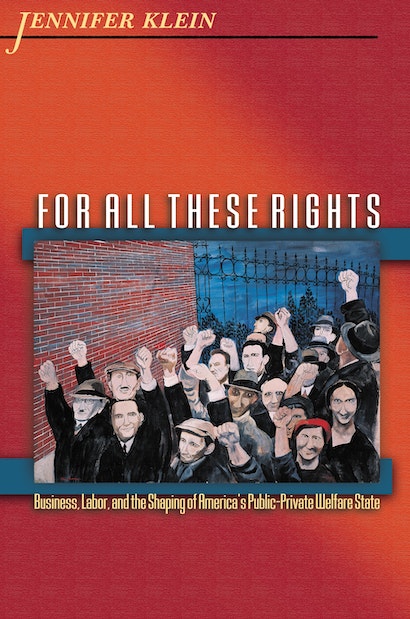 The New Deal placed security at the center of American political and economic life by establishing an explicit partnership between the state, economy, and citizens. In America, unlike anywhere else in the world, most people depend overwhelmingly on private health insurance and employee benefits. The astounding rise of this phenomenon from before World War II, however, has been largely overlooked. In this powerful history of the American reliance on employment-based benefits, Jennifer Klein examines the interwoven politics of social provision and labor relations from the 1910s to the 1960s. Through a narrative that connects the commercial life insurance industry, the politics of Social Security, organized labor’s quest for economic security, and the evolution of modern health insurance, she shows how the firm-centered welfare system emerged. Moreover, the imperatives of industrial relations, Klein argues, shaped public and private social security.


Looking closely at unions and communities, Klein uncovers the wide range of alternative, community-based health plans that had begun to germinate in the 1930s and 1940s but that eventually succumbed to commercial health insurance and pensions. She also illuminates the contests to define “security” — job security, health security, and old age security — following World War II.

For All These Rights traces the fate of the New Deal emphasis on social entitlement as the private sector competed with and emulated Roosevelt’s Social Security program. Through the story of struggles over health security and old age security, social rights and the welfare state, it traces the fate of New Deal liberalism — as a set of ideas about the state, security, and labor rights — in the 1950s, the 1960s, and beyond.

Jennifer Klein is Assistant Professor of History, at Yale University.

"[T]his book provides a fresh and compelling interpretation of some of the critical junctures in the development of old-age pensions and health insurance. This carefully argued and documented book is also invaluable for anyone wrestling with the question of 'what next?' for social security and health-care reform in the United States."—Marie Gottschalk, International Review of Social History

"What makes this splendid book so enlightening is Klein's ability to see multiple actors in motion and to grasp how several complex dynamics intersected in the crucial years between 1920 and 1950. Policy makers, political actors, union leaders, rank-and-file workers, associations, employers, insurers: all played a key role in the path—determining decisions taken in these crucial years. Klein handles all of these actors with a sure hand. . . . By brilliantly illuminating the historical roots of today's growing crisis, she makes an enormous contribution."—Joseph A. McCartin, American Historical Review

"For scholars of the welfare state, this book provides a fresh and compelling interpretation of some of the critical junctures in the development of old-age pensions and health insurance. This carefully argued and documented book is also invaluable for anyone wrestling with the question of 'what next' for social security and health-care reform in the United States."—Marie Gottschalk, International Review of Social History

"For All These Rights, meticulous in its historical research and forthright in its policy conclusions, is of compelling importance to all who want a richer understanding of the role of social insurance in our society. Utilizing a developmental perspective, Jennifer Klein adds to the body of provocative scholarship that explores the relationships and tensions between private and public social and health security programs. She has much to say to historians, political scientists, economists, and policy analysts, for in explaining the past she enriches our understanding of the present and prepares us for the debates that will determine the further evolution of America's private-public welfare state."—Rashi Fein, Ph.D., Professor of the Economics of Medicine, Emeritus, Harvard Medical School

"Jennifer Klein's splendid and deeply researched history of America's vast private welfare state contains many important messages for the present. Business increased its commitment to social welfare when government programs expanded. Private, not public, benefits have proved inefficient, inflationary, and unreliable. Business enterprises do not offer a stable, long-term foundation for benefits. And it is hard to hold them accountable. This is an essential book for the debate over the redefinition of the welfare state in this post-Enron age."—Michael B. Katz, Walter H. Annenberg Professor of History, University of Pennsylvania

"A brilliant and authoritative account of how today's crisis in social and economic security came to be. In a breathtakingly original journey into the heart of America's private health, welfare, and pension programs, Klein shows that the critical choices were not just about whether we had a public or a private welfare system but what the nature of those systems would be."—Dorothy Sue Cobble, Professor of Labor Studies, Rutgers University

"A dazzling excavation of the American welfare state. Jennifer Klein offers us a grand tour—labor and industry, politics and business, solidarity and anomie, feminism and paternalism, pensions and insurance, politics and culture. The result is a formidable account of the rise and fall of economic security in the United States."—James Morone, author of Hellfire Nation and The Democratic Wish

"This is a wonderful book. Well-written, it combines fresh research (especially in insurance industry archives) with a careful and sensible synthesis of the existing literature on social provision through the years under consideration. For All These Rights will undoubtedly occupy the center of the emerging debate about America's peculiar 'public/private welfare state.'"—Colin Gordon, University of Iowa, author of Dead on Arrival