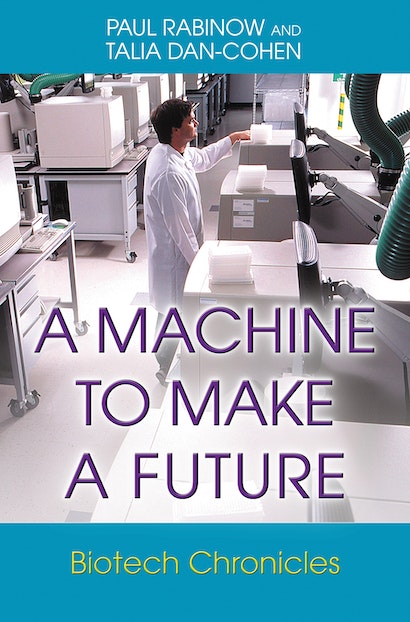 A Machine to Make a Future represents a remarkably original look at the present and possible future of biotechnology research in the wake of the mapping of the human genome. The central tenet of Celera Diagnostics — the California biotech company whose formative work during 2003 is the focus of the book — is that the emergent knowledge about the genome, with its profound implications for human health, can now be turned into a powerful diagnostic apparatus — one that will yield breakthrough diagnostic and therapeutic products (and, potentially, profit). Celera’s efforts — assuming they succeed — may fundamentally reshape the fabric of how health and health care are understood, practiced, and managed.


Presenting a series of interviews with all of the key players in Celera Diagnostics, Paul Rabinow and Talia Dan-Cohen open a fascinating window on the complexity of corporate scientific innovation. This marks a radical departure from other books on the biotech industry by chronicling the vicissitudes of a project during a finite time period, in the words of the actors themselves.


Ultimately, the authors conclude, Celera Diagnostics is engaged in a future characterized not by geniuses and their celebrated discoveries but by a largely anonymous and widely distributed profusion of data and results — a “machine to make a future.”


In their new afterword, Rabinow and Dan-Cohen revisit Celera Diagnostics as its mighty machine grinds along, wondering, along with the scientists, “what constitutes success and what constitutes failure?” The pathos of the situation turns on how one poses the question as much as how one answers it.

"The strength of Rabinow's approach is that we hear the voices of scientists at work. Not only do they describe the science itself, but they also provide their perception of its importance. Rabinow is a skillful interviewer who elicits motivation from his subjects. We are given a rare glimpse into the professional lives of the participants and the energy that drives their scientific and personal decisions."—William A. Haseltine, Science

"Paul Rabinow is the leading anthropologist of contemporary biotechnology. . . It would be easy for him to use his authority to apportion praise and blame, or to develop a magisterial contribution to anthropological theory. But [he] resists coming to artificially neat conclusions. . . . This book's compelling insights should be required reading for everyone who pictures themselves a scientific entrepreneur, or who cares about the state of contemporary science."—Christine Hine, New Scientist

"A Machine to Make a Future by Paul Rabinow and Talia Dan-Cohen, a book as impressive as the previous two works in Rainbow's biotechnology trilogy . . . Is an in-depth and well-constructed anthropological chronicle of this new Californian scientific enterprise. With his student Talia Dan-Cohen, Rabinow has provided a highly readable account of Celera Diagnostics' formative period . . . through a series of lengthy but insightful interviews with the original researchers."—Xuefeng Bruce Ling, The Journal of Clinical Investigation

"This book is a good choice for even a layperson to get a grip on the current developments in the world of genomics and how these diagnostics can help health and health care."—Rukmini Rajagopalan, Current Science

"[Paul Rabinow's] interviews are expertly conducted and provide a rich resource that can be mined from a variety of perspectives—including scientific, business, legal, ethical, and philosophical."—George Jannas, Quarterly Review of Biology

"The stresses caused by the rapid growth of biological knowledge and capability will sorely test democratic societies in the coming decades. A first step in coping with these strains must involve expanding the discussion of the issues and the pace of change beyond the tiny circle of biologists and businesspeople now involved. Enter Rabinow and Dan-Cohen, whose investigations of Celera Diagnostics, a company at the forefront of research in human genetic differences, open the concepts, practices, and institutions of this revolutionary world to broader public scrutiny. Imagine if Tracy Kidder had written The Soul of a New Machine about a genomic diagnostics company, and informed it with deep, scholarly insight into science, business, and leadership, and you begin to get the scope of this book."—Dr. Roger Brent, Director and President of The Molecular Sciences Institute

"This fascinating book opens up a huge number of questions about how social scientists, anthropologists, or science studies practitioners write about science, scientists, technology, and innovation. It offers some of the most sophisticated and detailed accounts to date of the complexity, serendipity, and unpredictability of the very kinds of scientific innovation that are often described as being deliberately planned to serve specific interests or normative values. It is packed with very original data, its analytical style and argument are very provocative, and it makes a very timely contribution to the field. I have never read anything like it."—Sarah Franklin, author of Embodied Progress: A Cultural Account of Assisted Conception

"This impressive book provides an accessible, frank, behind-the-scenes look at what is really likely from the much-hyped hope-inspiring mapping of the genome. Led by the brilliant questioning and set pieces Rabinow and Dan-Cohen have devised, the reader gains, on the one hand, a heartening view of collective scientific talent, ingenuity, and cunning at work. On the other hand, through their interviews the authors show what is really different about this work of scientists—the talented work under the shadow of the profit motive, risk, opportunity, markets, and the brutality, sometimes, of the verdicts of their capitalist patrons. All of this is ingeniously explored in this chronicle, in an involving and engaging way. I gained much from reading it both as an anthropologist and as a middle-aged general reader, like many others, interested in the imminent promise of genetics for medical care."—George Marcus, Rice University, author of Ethnography through Thick and Thin

"A Machine to Make a Future is an insightful and creative contribution to the literature—both scholarly and journalistic—on contemporary genomics. By 'experimenting' with narrative genre, the authors hope to generate different insights into the world of genomics and biotechnology than ones generally presented in existing accounts. They succeed at that goal, providing an account that is ethnographically rich and analytically open to a world whose structure, implications, and outcomes are very much in the making."—Nadia Abu El-Haj, Barnard College, author of Facts on the Ground