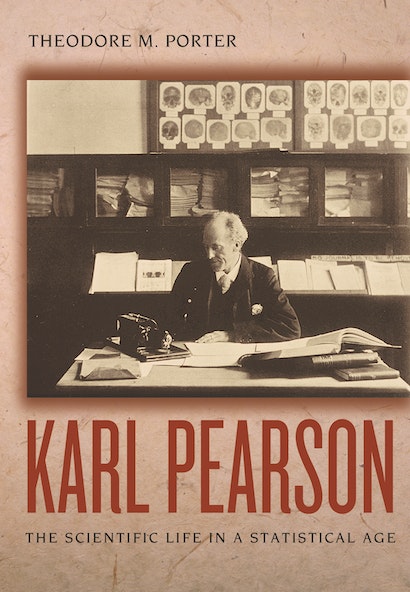 Karl Pearson, founder of modern statistics, came to this field by way of passionate early studies of philosophy and cultural history as well as ether physics and graphical geometry. His faith in science grew out of a deeply moral quest, reflected also in his socialism and his efforts to find a new basis for relations between men and women. This biography recounts Pearson’s extraordinary intellectual adventure and sheds new light on the inner life of science.


Theodore Porter’s intensely personal portrait of Pearson extends from religious crisis and sexual tensions to metaphysical and even mathematical anxieties. Pearson sought to reconcile reason with enthusiasm and to achieve the impersonal perspective of science without sacrificing complex individuality. Even as he longed to experience nature directly and intimately, he identified science with renunciation and positivistic detachment. Porter finds a turning point in Pearson’s career, where his humanistic interests gave way to statistical ones, in his Grammar of Science (1892), in which he attempted to establish scientific method as the moral educational basis for a refashioned culture.


In this original and engaging book, a leading historian of modern science investigates the interior experience of one man’s scientific life while placing it in a rich tapestry of social, political, and intellectual movements.

"Theodore Porter's book on Pearson is not a biography in the conventional sense. It focuses on the early part of his career in an effort to show how he was drawn to the study of statistics and eventually conceived it as the key to a new philosophy of nature, which was to become his life's work. . . . The great value of Porter's book is that this focus on the early phase of Pearson's career highlights the complex route by which his quest for emotional and intellectual satisfaction led him towards the project that would, in effect, create modern statistics."—Peter J. Bowler, Nature

"[A] brilliant biography, one can hardly imagine a better summary of Karl Pearson's fascinating life and complicated persona. . . . [Porter] reveals more about the origins, aspirations, and consequences of modern statistics than any technical treatise of the same length could possibly accomplish. As Porter emphasizes, Pearson's life was a tour de force [and] extremely fascinating to the reader."—Manfred D. Laubichler, Science

"Porter's biography of the young Pearson, the statistician in embryo, exceeds all expectations in recreating the intellectual worlds in which Pearson tried to find a home. The breadth of the reading and the depth of interpretation are impressive. . . . Porter shows us a young Pearson, clever and brave, who has a burning passion to understand things."—John Aldrich, American Scientist

"This book is a remarkable achievement."—Jenny Marie, Journal of the History of Biology

"Pearson's story can . . . be read as a triumph of statistics in which a powerful intellect comes to see our field as a great source of enlightenment. As [Theodore M.] Porter writes in a wonderful first sentence, 'Beginning in 1892, when he took up statistics as his scientific vocation, Karl Pearson devoted himself relentlessly to a project of almost universal quantification.' That sentence very effectively conveys what I try to tell my students in a first statistics course, that this is a way of thinking which will allow them to see the world in a new and beautiful way, though I do hope that they avoid adopting Pearson's unwavering commitment that statistics is the only way to view the world."—Richard J. Cleary, The American Statistician

"Theodore Porter's Karl Pearson explores the fullness and richness of Pearson's intellectual and emotional life, shows us how 'the toil of the years' led to the revolution he wrought in statistics. . . . The book would . . . be a source of both pleasure and profit to any serious reader."—Ramachandran Bharath, MAA Reviews

"Karl Pearson was one of the most significant architects of modern statistics. In this remarkable book, Theodore Porter superbly captures the romance (and seldom has the use of this word been so appropriate) of Karl Pearson's early flirtation with philosophy and the tortured path that led him to statistics."—Stephen Stigler, University of Chicago

"Brilliant! Karl Pearson is fortunate to have a biographer who saves him from what he most abhorred: his fear that a life could be reduced to a mere discovery, stripped of all its personal and historical specificity. "—Ken Alder, Northwestern University, author of The Measure of All Things