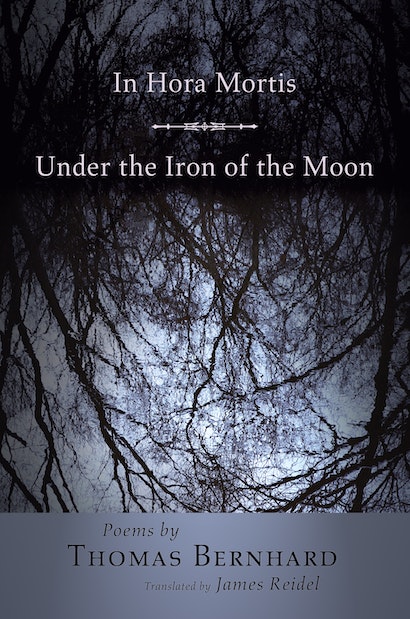 Internationally acclaimed Austrian novelist, playwright, and memoirist Thomas Bernhard (1931-1989) has been compared to Kafka and Beckett, and critics have ranked his novels among the masterpieces of the twentieth century. But in fact he began his career in the 1950s as a poet, publishing three books of well-received verse before turning to fiction. In Hora Mortis / Under the Iron of the Moon is the first book of his expressionist-like poetry to be published in English. Bringing together Bernhard’s second and third books of poetry, the collection’s short, untitled lyrics reveal his early explorations of themes that would continue to preoccupy him in his novels, plays, and other writings — especially his intense ambivalence toward the land and people of Austria and their then-recent Nazi past. As the translator James Reidel writes in his preface, “Bernhard found Austrian soil … to be like a hair shirt and a blanket. It is a killing ground but with a postcard setting.” In poems that both subvert and pay homage to such influences as Georg Trakl, Bernhard begins to develop his characteristic dark humor while exploring themes of nature, death, meaninglessness, and faith.

Thomas Bernhard wrote the novels Gargoyles and Woodcutters and the play Heldenplatz. James Reidel is a poet, translator, and scholar.

"For all their acrid elegance, [these poems] are compelling because Thomas Bernhard wrote them. . . . [T]hey . . . show how deeply Bernhard, the caustic besmircher of the native nest, was rooted in the soil of his homeland. Every line suggests that his love of it was almost equal to his loathing."—Eric Ormsby, New York Sun

"Already recognized as a champion of neglected genius, Reidel continues his admirable project by providing American readers with the early verse works of the modern prose master, Thomas Bernhard. This is a beautiful and necessary book. The translations themselves immediately strike me as both accurate and inspired, and are accompanied by a highly readable and erudite introduction which vividly brings to life the young Bernhard and his efforts (alongside older contemporaries such as Krolow, Eich, Bachmann, and Celan) to recreate for literary and moral purposes the great language the Nazis destroyed."—Franz Wright, winner of the Pulitzer Prize for poetry

"Thomas Bernhard was first and possibly foremost a poet, belonging in the company of Georg Trakl and Paul Celan, yet his poetry has remained unremarked and curiously unattended until now, with the publication of James Reidel's masterful translations, wherein Bernhard's German shimmers into an English commensurate with his strangely comedic and mystical cris de coeur. If Bernhard is, as he has been called, 'an instrumentalist of language,' then Reidel has written for that language a symphony of lyric art, and in so doing, rescued for the world a major twentieth-century poet."—Carolyn Forché, author of Blue Hour: Poems

"While Thomas Bernhard's early works of poetry are relatively unknown, they show the ingenious beginnings of the author's ironic and morbid vision, influenced by the poetry of Rilke, Celan, and the expressionist Trakl. James Reidel is an accomplished translator in addition to being a well-known poet himself and he does an excellent job of transposing the poems into a proper English context while preserving the original German sense."—Matthias Konzett, Tufts University, author of Rhetoric of The National Dissent in Thomas Bernhard, Peter Handke and Elfriede Jelinek

"I am very taken with James Reidel's translations of these two remarkable volumes of the great Austrian novelist and playwright Thomas Bernhard, who began his career, in the 1950s, as a poet. Here we have these unknown but powerful poems carefully translated and well introduced."—Richard Howard, series editor of the Lockert Library of Poetry in Translation, and author of Inner Voices: Selected Poems, 1963-2003