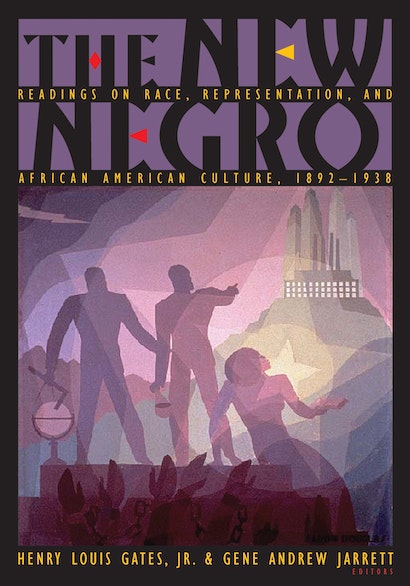 When African American intellectuals announced the birth of the “New Negro” around the turn of the twentieth century, they were attempting through a bold act of renaming to change the way blacks were depicted and perceived in America. By challenging stereotypes of the Old Negro, and declaring that the New Negro was capable of high achievement, black writers tried to revolutionize how whites viewed blacks — and how blacks viewed themselves. Nothing less than a strategy to re-create the public face of “the race,” the New Negro became a dominant figure of racial uplift between Reconstruction and World War II, as well as a central idea of the Harlem, or New Negro, Renaissance. Edited by Henry Louis Gates, Jr., and Gene Andrew Jarrett, The New Negro collects more than one hundred canonical and lesser-known essays published between 1892 and 1938 that examine the issues of race and representation in African American culture.

These readings — by writers including W.E.B. Du Bois, Paul Laurence Dunbar, Alain Locke, Carl Van Vechten, Zora Neale Hurston, and Richard Wright — discuss the trope of the New Negro, and the milieu in which this figure existed, from almost every conceivable angle. Political essays are joined by essays on African American fiction, poetry, drama, music, painting, and sculpture. More than fascinating historical documents, these essays remain essential to the way African American identity and history are still understood today.

Henry Louis Gates, Jr., is the Alphonse Fletcher University Professor and director of the W.E.B. Du Bois Institute at Harvard University. His most recent books include Finding Oprah's Roots and The Trials of Phillis Wheatley. Gene Andrew Jarrett is associate professor of English and African American studies at Boston University. He is the author of Deans and Truants: Race and Realism in African American Literature.

"Because 'New Negro' is really just a catchprase for the capacious topic of race in America, this is less an anthology than a mix of articles, criticism, essays, theories, calls to action and commentary by people both black and white, ranging from the famous (Richard Wright, James Weldon Johnson, H.L. Mencken) to those lesser known but prominent in their time (Alain Locke). The result is a spirited...dialectic tracing the most intense period of New Negro discussions, between 1892 and 1938."—Erin Aubry Kaplan, Los Angeles Times Book Review

"Recent years have seen an explosion of writings on the so-called new Negro. . . . Now Gates and Jarrett lend their considerable voices to the discussion. Including an excellent introduction that situates the debate, this anthology collects some 100 essays on the trope of the new Negro between 1892 and 1938, years that broadly encompass the period known as the Harlem Renaissance. . . . The book covers not only literature but also music, theater, and the fine arts and convincingly links them with social and political happenings of the period. . . . [O]verall this is a masterful piece of work."—L. J. Parascandola, Long Island University, for, CHOICE

"The New Negro is a valuable collection of essays that is accessible to scholars, teachers, and those generally interested in African-American history. When placed within the context of recent New Negro scholarship, the anthology reinforces the need to expand the depth and breadth of research into Post-Reconstruction representations of race in African-American culture."—Gabriel A. Briggs, Callaloo

"This illuminating and indispensable anthology lays bare a fascinating genealogy of the most frequently invoked trope in the history of U.S. Black culture and politics: The New Negro. Professors Gates and Jarrett take us on an intellectual journey through a crucial half century of Black thought that remains relevant in our time!"—Cornel West, author of Race Matters and Democracy Matters

"This anthology will make a marvelous companion to any course on the Harlem Renaissance or the 'New Negro' phenomenon, and an excellent resource even for advanced scholars looking for a compendium of essays that contextualize African American cultural and political thought between the 1890s and 1930s. The range of authors is admirable and many of these essays are immensely readable—pithy, vituperative, inspiriting, and humorous by turns."—George B. Hutchinson, Indiana University

"Bringing together a comprehensive body of essays from a wide range of fields, this anthology will be invaluable to scholars and students of the period from the late nineteenth century to the end of the Harlem Renaissance. It provides not only canonical texts, but also lesser-known pieces, so that it will enhance our understanding of this important period."—Valerie Smith, Princeton University