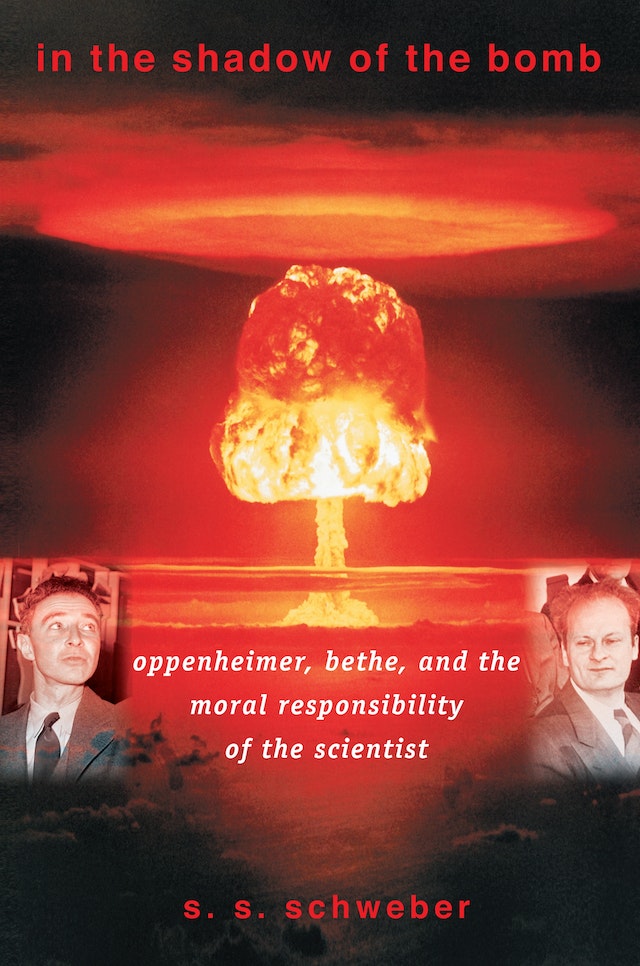 In the Shadow of the Bomb narrates how two charismatic, exceptionally talented physicists — J. Robert Oppenheimer and Hans A. Bethe — came to terms with the nuclear weapons they helped to create. In 1945, the United States dropped the bomb, and physicists were forced to contemplate disquieting questions about their roles and responsibilities. When the Cold War followed, they were confronted with political demands for their loyalty and McCarthyism’s threats to academic freedom. By examining how Oppenheimer and Bethe — two men with similar backgrounds but divergent aspirations and characters — struggled with these moral dilemmas, one of our foremost historians of physics tells the story of modern physics, the development of atomic weapons, and the Cold War.


Oppenheimer and Bethe led parallel lives. Both received liberal educations that emphasized moral as well as intellectual growth. Both were outstanding theoreticians who worked on the atom bomb at Los Alamos. Both advised the government on nuclear issues, and both resisted the development of the hydrogen bomb. Both were, in their youth, sympathetic to liberal causes, and both were later called to defend the United States against Soviet communism and colleagues against anti-Communist crusaders. Finally, both prized scientific community as a salve to the apparent failure of Enlightenment values.


Yet, their responses to the use of the atom bomb, the testing of the hydrogen bomb, and the treachery of domestic politics differed markedly. Bethe, who drew confidence from scientific achievement and integration into the physics community, preserved a deep integrity. By accepting a modest role, he continued to influence policy and contributed to the nuclear test ban treaty of 1963. In contrast, Oppenheimer first embodied a new scientific persona — the scientist who creates knowledge and technology affecting all humanity and boldly addresses their impact — and then could not carry its burden. His desire to retain insider status, combined with his isolation from creative work and collegial scientific community, led him to compromise principles and, ironically, to lose prestige and fall victim to other insiders.


Schweber draws on his vast knowledge of science and its history — in addition to his unique access to the personalities involved — to tell a tale of two men that will enthrall readers interested in science, history, and the lives and minds of great thinkers.

Silvan S. Schweber is Professor Emeritus of Physics and Richard Koret Professor in the History of Ideas at Brandeis University and an Associate in Harvard's Department of the History of Science. He obtained a Ph.D. in theoretical physics from Princeton in 1952, and later became a historian of science. He is a Fellow of the American Physical Society and the American Academy of Arts and Sciences, and author of Introduction to Relativistic Quantum Field Theory and QED and the Men Who Made It (Princeton).

"An absorbing investigation of how the two physicists, each formidable in his own way, attempted to shoulder responsibility for their creation."—The New Yorker

"There is merit to Schweber's contrasting portraits of Oppenheimer and Bethe. . . . Trained as a physicist, Schweber is the first biographer to explain the significance of the scientific work that Oppenheimer and Bethe did—a fascinating topic in itself."—Gregg Herken, American Scientist

"The author of this book studied physics with J. Robert Oppenheimer and Hans Bethe. His remarkably clear account of their rise to intellectual leadership in the 1930's pulses with an insider's love. Mostly, however, S. S. Schweber writes as a historian and philosopher of science, elegantly exploring the morally fractured stories of American physicists transformed by the Cold War."—John M. Staudenmaier, The Historian

"In the Shadow of the Bomb is a rare example of a successful hybrid work. . . . Schweber entwines issues of science, technology, ethics, and politics in a relatively seamless manner, bringing in each lens of analysis at the appropriate time. . . . [He] presents a model of how to write respectfully of individuals while portraying them as fallible human beings in a complex cultural, political, intellectual, and scientific context."—Russell Olwell, Technology & Culture

"For a world in which scientific power must be checked by visionary words linked to prudent politics, Schweber has written a book of compelling insight."—Booklist

"Schweber is to be commended for pulling together, with comprehensive referencing, many of the relevant events in the interlocking sagas of Oppenheimer and Bethe. . . . Bethe is the dominant figure in this volume, and Schweber knows and describes him well."—Sidney D. Drell, Physics Today

"Silvan Schweber [worries] about the gap between moral ideals and moral realities among scientists who brought the Atomic Age into being and who lived with its postwar consequences. . . . In the Shadow of the Bomb . . .contrasts Bethe's exemplary conduct with Oppenheimer's moral ambiguity."—Steven Shapin, London Review of Books

"[A] fascinating account. . . . [It offers] gripping accounts that capture the essence of an era through panoramic detail."—Nicole Johnston, The Globe and Mail

"[A] book, well footnoted and scholarly, that poses fundamental moral and ethical questions and seeks their answers through examination of the lives of Oppenheimer and Bethe. This is very much a book for current times. . ."—Choice

"Schweber's book . . . offers intriguing insights into the creativity of [Robert Oppenheimer and Hans Bethe] and the shaping of their moral outlooks in the atomic age. How they balanced the ethical equation between uncovering truths about nature and inventing the most terrible weapons of mass destruction makes for fascinating reading."—PD Smith, The Guardian Unlimited

"Schweber deals with the political involvements and ethical responsibilities of physicists in and after World War II in a new way and takes up themes and events that have not been dealt with in detail, or at all, in other works. The book is a study in parallel lives, and, as Schweber points out, there are just enough of both similarities and differences in the backgrounds of Oppenheimer and Bethe to make a comparison of their almost-parallel lives meaningful and rewarding. I consider the work to be important as well as very readable."—Helge Kragh, author of Quantum Generations