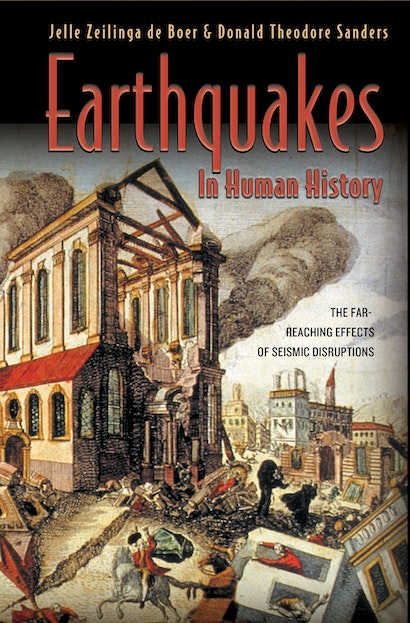 On November 1, 1755 — All Saints’ Day — a massive earthquake struck Europe’s Iberian Peninsula and destroyed the city of Lisbon. Churches collapsed upon thousands of worshippers celebrating the holy day. Earthquakes in Human History tells the story of that calamity and other epic earthquakes. The authors, Jelle Zeilinga de Boer and Donald Theodore Sanders, recapture the power of their previous book, Volcanoes in Human History. They vividly explain the geological processes responsible for earthquakes, and they describe how these events have had long-lasting aftereffects on human societies and cultures. Their accounts are enlivened with quotations from contemporary literature and from later reports.


In the chaos following the Lisbon quake, government and church leaders vied for control. The Marquês de Pombal rose to power and became a virtual dictator. As a result, the Roman Catholic Jesuit Order lost much of its influence in Portugal. Voltaire wrote his satirical work Candide to refute the philosophy of “optimism,” the belief that God had created a perfect world. And the 1755 earthquake sparked the search for a scientific understanding of natural disasters.


Ranging from an examination of temblors mentioned in the Bible, to a richly detailed account of the 1906 catastrophe in San Francisco, to Japan’s Great Kanto Earthquake of 1923, to the Peruvian earthquake in 1970 (the Western Hemisphere’s greatest natural disaster), this book is an unequaled testament to a natural phenomenon that can be not only terrifying but also threatening to humankind’s fragile existence, always at risk because of destructive powers beyond our control.

Jelle Zeilinga de Boer and Donald Theodore Sanders are the authors of Volcanoes in Human History. Zeilinga de Boer is the Harold T. Stearns Professor of Earth Science at Wesleyan University. Sanders, a Wesleyan graduate and former geologist, is an independent science editor and writer.

"A splendid geographical and cultural survey of how, over the centuries, the unquiet Earth has altered our sense of nature and ourselves."—Russell Seitz, Wall Street Journal

"The effects of tremors lasting only minutes often dwarf those of almost all other natural disasters, leaving scars on the landscape and the population that can last for centuries. Geologist Jelle Zeilinga de Boer and science writer Donald Theodore Sanders drive that point home with well-chosen evidence from notable seismic upheavals of the past. . . . [T]he best parts of the book are the stories, big and small, of people and institutions affected by the great seismic disruptions."—Laurence A. Marschall, Natural History

"The authors provide little-known facts and insights on geologic processes and the effects of these natural disasters on the course of human history. . . . Because earthquakes are an expression of a living and evolving planet Earth, knowledge of their influence on a living and evolving human population is essential. This book goes a long way toward erasing that knowledge deficit."—Choice

"A terrifying but excellent study of human history in relation to earthquakes, the tsunamis earthquakes can cause, and the consuming fires that often follow and take the greatest tolls. . . . [A] great read: The authors weave in high-profile literature, heavy doses of exciting political history and some baseline geology for understanding, plus a bunch of tidbits that are not standard fare even for the most geology-centric reader."—Victoria Bruce, The Globe and Mail

"Jelle Zelinga de Boer and Donald Theodore Sanders relate fascinating historical accounts illustrating how earthquakes have repeatedly served as catalysts for significant, long-term changes in social, political, military, religious, economic, and other conditions. . . . A major strength of [their] writing is their talent for clearly and succinctly delivering complex scientific theory to the lay reader. . . . de Boer's and Sanders' work helps ensure that disaster risk receives the attention it most certainly warrants."—Shawn Fenn, Journal of Homeland Security and Emergency Management

"The book is well written, in a clear crisp style, without unnecessary jargon. The geological aspects are admirably well informed and accurate. . . . This is an admirable book. It is easily the most scholarly and well-informed discussion of the broader historical contexts of these earthquakes that I have read, and the geological accounts of what happened are well explained."—James Jackson, Geological Magazine

"I recommend it to any geophysicist interested in the human impact of earthquakes, and indeed, as a result of reading it I am keen to search out previous work by the authors which studies the sociological effects of volcanic eruptions."—John Brittan, Leading Edge

"The book is written with a vivid and easily digested narrative style that helps the amateur reader to assimilate a bit of basic geological knowledge. . . . [T]he geology-centered reader will better understand the far-reaching effects of earthquakes for different aspects of the history of civilization."—Marek Lewandowski, Pure and Applied Geophysics

"Earthquakes in Human History moves through the centuries and across the continents to show how earthquakes have shaped different societies. With a cast of characters that includes God and his ever-feared wrath, Cleopatra, Voltaire, Mark Twain, and the Sandinistas, it is an engaging and at times thrilling tale. I am confident that it will accomplish the authors' goal of nudging scientists to recognize the social and cultural impact of the geosciences and encouraging historians and others to explore scientific explanations for natural disasters."—Charles Walker, University of California, Davis

"Zeilinga de Boer and Sanders have provided us with evidence that natural phenomena, in this case earthquakes, can sometimes have long-term historical consequences in changing the fate of cultures. With examples ranging from biblical to modern times, they show how destructive earthquakes have interacted with wars, religious beliefs, and political movements in changing history. Each account is preceded by a generally accessible account of the geological processes that led to the fateful earthquake. A fascinating read and an antidote to the usual anthropocentric views of history such as that of Arnold Toynbee."—Christopher H. Scholz, Lamont-Doherty Earth Observatory, Columbia University