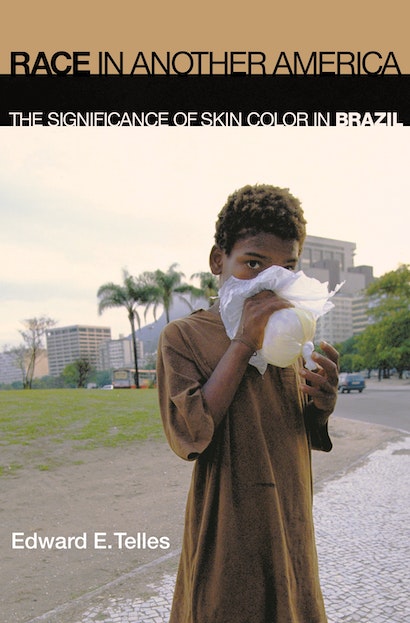 This is the most comprehensive and up-to-date book on the increasingly important and controversial subject of race relations in Brazil. North American scholars of race relations frequently turn to Brazil for comparisons, since its history has many key similarities to that of the United States. Brazilians have commonly compared themselves with North Americans, and have traditionally argued that race relations in Brazil are far more harmonious because the country encourages race mixture rather than formal or informal segregation.


More recently, however, scholars have challenged this national myth, seeking to show that race relations are characterized by exclusion, not inclusion, and that fair-skinned Brazilians continue to be privileged and hold a disproportionate share of wealth and power.


In this sociological and demographic study, Edward Telles seeks to understand the reality of race in Brazil and how well it squares with these traditional and revisionist views of race relations. He shows that both schools have it partly right — that there is far more miscegenation in Brazil than in the United States — but that exclusion remains a serious problem. He blends his demographic analysis with ethnographic fieldwork, history, and political theory to try to “understand” the enigma of Brazilian race relations — how inclusiveness can coexist with exclusiveness.


The book also seeks to understand some of the political pathologies of buying too readily into unexamined ideas about race relations. In the end, Telles contends, the traditional myth that Brazil had harmonious race relations compared with the United States encouraged the government to do almost nothing to address its shortcomings.

Edward E. Telles is Professor of Sociology at the University of California, Los Angeles. He previously worked as the Program Officer in Human Rights of the Ford Foundation in Rio de Janeiro.

"This is a blockbuster of a book. To a topic—Brazilian race relations—historically fraught with ambiguity, uncertainty, and disagreement, it brings clarity, logic, and lucidity, not to mention several truckloads of data. The result is the most important work on race in Brazil since Gilberto Freyre's seminal The Masters and the Slaves (1933). . . . The clarity and lucidity of Telles's findings, and the wealth of data on which they are based, make this book a genuine tour de force, and the most illuminating examination of Brazilian race relations that I have ever read."—George Reid Andrews, Journal of Social History

"Edward Telles's rich and important book is the latest, and most systematic, sociological study of Brazilian race relations. . . . In this book, Telles greatly advances our knowledge of race's significance in Brazil and, to a lesser extent, in the United States. It should be required reading in any sociology course about Brazil and/or race."—Melissa Nobles, American Journal of Sociology

"Telles skillfully diagnoses the dimensions and mechanisms of race discrimination and, in a lucid final chapter, identifies those policy solutions the government should contemplate to break with these nefarious patterns."—Mala Htun, Political Science Quarterly

"Edward E. Telles's consideration of race in Brazil is a landmark study. . . . It sets a standard for the study of race in Brazil against which all future works on the subject will be measured."—David Covin, Perspectives on Politics

"An amazingly detailed account of race in Brazil. . . . [T]he author makes a major contribution to the understanding of race relations, making this book required reading for anyone interested in the topics of race or Brazil."—Franklin Goza, Contemporary Sociology

"Edward Telles's Race in Another America is an impressive comparative analysis on the maintenance of racial boundaries and forms of racial discrimination that focuses mainly on Brazil and the United States."—Kwame Dixon, Latin American Research Review

"Edward Telles has written a book distinguished by careful research and attention to the existing literature in Brazilian race relations and society, supplemented by astute personal observations and reflectivity."—Anani Dzidzienyo, The Americas

"This is the first systematic scholarly treatment of the subject in any language by a fully trained sociologist. It is a highly valuable guide to the existing literature, and Telles' discussion by region of Brazil is the most revealing I have read. Because he worked in Rio de Janeiro as a staff advisor for the Ford Foundation, Telles was able to tap all the best sources—both primary and secondary. His skillful synthesis makes this a book that will appeal to readers in many fields."—Thomas E. Skidmore, Brown University

"Telles has produced what will long be regarded as the definitive treatment of race relations in Brazil. Mobilizing tools from historical demography, stratification, social movement, and policy analysis, he provides a water-tight refutation of the myth of racial democracy while analyzing the extend and causes of racial discrimination. He skillfully parcels out social boundaries as manifested in intermarriage and residential segregation, while acknowledging the distinctive impact of sociability on race relations. With the United States in the background, Telles makes a terrific contribution to the growing field of comparative racism."—Michele Lamont, Harvard University

"Edward Telles has written an important and inspired book, one that will force those who think they know Brazil and who think they know America to examine their preconceptions anew. With Race in Another America, Telles has not only broken substantial new scholarly ground, he has created work that will be essential reading for anyone trying to understand the often complex and Byzantine workings of race in society. Race in Another America is a masterfully conducted journey through Brazil, and a prescient look at where America, in some respects, is likely headed. It will be of interest not only to scholars, but to anyone who cares about the future of race in the world today."—Ellis Cose, author of Bone to Pick, Rage of the Privileged Class, Color-Blind, and The Envy of the World