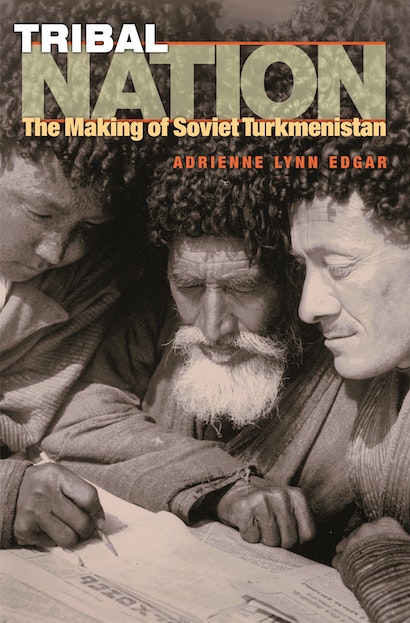 On October 27, 1991, the Turkmen Soviet Socialist Republic declared its independence from the Soviet Union. Hammer and sickle gave way to a flag, a national anthem, and new holidays. Seven decades earlier, Turkmenistan had been a stateless conglomeration of tribes. What brought about this remarkable transformation?

Tribal Nation addresses this question by examining the Soviet effort in the 1920s and 1930s to create a modern, socialist nation in the Central Asian Republic of Turkmenistan. Adrienne Edgar argues that the recent focus on the Soviet state as a “maker of nations” overlooks another vital factor in Turkmen nationhood: the complex interaction between Soviet policies and indigenous notions of identity. In particular, the genealogical ideas that defined premodern Turkmen identity were reshaped by Soviet territorial and linguistic ideas of nationhood. The Soviet desire to construct socialist modernity in Turkmenistan conflicted with Moscow’s policy of promoting nationhood, since many Turkmen viewed their “backward customs” as central to Turkmen identity.

Tribal Nation is the first book in any Western language on Soviet Turkmenistan, the first to use both archival and indigenous-language sources to analyze Soviet nation-making in Central Asia, and among the few works to examine the Soviet multinational state from a non-Russian perspective. By investigating Soviet nation-making in one of the most poorly understood regions of the Soviet Union, it also sheds light on broader questions about nationalism and colonialism in the twentieth century.

Adrienne Lynn Edgar is Associate Professor of History at the University of California, Santa Barbara. She was formerly an editor of World Policy Journal.

"This expertly written volume . . . describes its shift from an obedient Soviet republic to an independent Turkmenistan with its own flag, national anthem, and problems."—Choice

"Adrienne Lynn Edgar has filled a significant gap in the scholarship with this engaging new book on the history of Soviet Turkmenistan. There is really nothing out there quite like it."—Michael G. Smith, Slavic Review

"The book is one of the most important of the regional studies that are currently enhancing our knowledge of nation-building in the interwar Soviet Union. Its fluent and easy style, and Edgar's disposition not to take for granted an acquaintance with Soviet history, make it a very good introduction to Soviet nationalities policy through case study, and a book also suitable for undergraduate courses."—Niccolò Pianciola, International Review of Social History

"As the first English-language monograph to analyze the complexity of Turkmen life and identity within the context of Soviet policies, the book superbly reviews the compromises between the central Soviet authorities in Moscow and the European and Turkmeni communists in Central Asia."—George O. Liber, Europe: Early Modern and Modern

"Professor Edgar covers the period of Soviet Turkmenistan since its creation in its more constructive formative period until the time of the Great Terror. She has researched her subject admirably well and presents her discoveries in thorough yet readable detail."—Albrecht Rothacher, Asian Europe Journal

"One of the most exciting new works of central Asian history in recent years. . . . This book richly illustrates the Turkmen 1920s and 1930s, but it loses none of its salience in a diagnosis of central Asian life today. An ideal length for teaching and a pleasure to take up: Edgar's book is a must-read for anyone engaged in central Asian history, ethnography, and comparative politics."—Bruce Grant, Journal of Modern History

"This is a beautifully written, extremely well researched, and very well argued investigation of nation-making in Soviet Central Asia. Edgar's work goes much further than that of many of her contemporaries and moves in an important new direction. Rather than simply look out from Moscow, from the top down, she begins from Turkmenistan, from the local, and argues that the actual shapes that nations took were the result of a complex negotiation between local traditions and the plans of the Soviets themselves. This is an extraordinarily important refinement of the existing literature."—Ronald Suny, University of Chicago, author of The Soviet Experiment: Russia, the USSR, and the Successor States

"An excellent book. Edgar tackles a big topic with great finesse. She does so in very accessible prose that conveys complex ideas without any jargon. In terms of scope and quality, Tribal Nation ranks among the best historical scholarship in the Russian/Soviet sphere. The making of Soviet Turkmenistan, and the Soviet regime's attempt to build modern socialism through massive intervention in society, is a topic of enormous interest. The book is solidly based on archival research, and displays wonderful mastery of detail."—Adeeb Khalid, Carleton College, author of The Politics of Muslim Cultural Reform: Jadidism in Central Asia