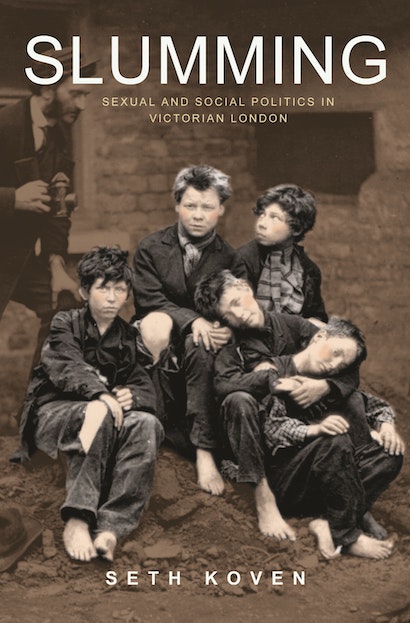 In the 1880s, fashionable Londoners left their elegant homes and clubs in Mayfair and Belgravia and crowded into omnibuses bound for midnight tours of the slums of East London. A new word burst into popular usage to describe these descents into the precincts of poverty to see how the poor lived: slumming. In this captivating book, Seth Koven paints a vivid portrait of the practitioners of slumming and their world: who they were, why they went, what they claimed to have found, how it changed them, and how slumming, in turn, powerfully shaped both Victorian and twentieth-century understandings of poverty and social welfare, gender relations, and sexuality.


The slums of late-Victorian London became synonymous with all that was wrong with industrial capitalist society. But for philanthropic men and women eager to free themselves from the starched conventions of bourgeois respectability and domesticity, slums were also places of personal liberation and experimentation. Slumming allowed them to act on their irresistible “attraction of repulsion” for the poor and permitted them, with society’s approval, to get dirty and express their own “dirty” desires for intimacy with slum dwellers and, sometimes, with one another.


Slumming elucidates the histories of a wide range of preoccupations about poverty and urban life, altruism and sexuality that remain central in Anglo-American culture, including the ethics of undercover investigative reporting, the connections between cross-class sympathy and same-sex desire, and the intermingling of the wish to rescue the poor with the impulse to eroticize and sexually exploit them.


By revealing the extent to which politics and erotics, social and sexual categories overflowed their boundaries and transformed one another, Koven recaptures the ethical dilemmas that men and women confronted — and continue to confront — in trying to “love thy neighbor as thyself.”

Seth Koven is Associate Professor of History at Rutgers University and co-editor of Mothers of a New World: Maternalist Politics and the Origins of Welfare States. He has written on a variety of topics, including gender and welfare states, museum politics, sexual politics, and social reform, disability, and child welfare.

"A bountiful, provocative, and piquant 'genealogy of benevolence and social welfare,' with more than enough sex to frighten the horses."—John Leonard, Harper's Magazine

"Koven's study is undoubtedly one of the most important new contributions to the study of the Victorian city. . . . It is, after all, a testimony to the provocactive brilliance of this book that the reader is left with not just answers to class and gender relations in Victorian London, but with new questions."—Lynda Nead, American Historical Review

"A significant study . . . that illuminates the complicated relationships between London's rich and poor from the mid-1800s to the start of World War I. . . . [A] thoughtful, cogent, and copiously referenced work."—Library Journal

"Given the constant stream of works on Victorian Britain, one sometimes feels that a moratorium is due. But occasionally a book comes along that makes one realize the exciting work that can still be done on that era. Seth Koven's Slumming is such a book, combining empirical richness with stimulating theoretical analysis and opening up questions for further research."—Lesley Hall, Times Higher Education Supplement

"We tend to think of Victorian haves regarding the have-nots—when they thought of them at all—as another species whose sinful idleness accounted for their place below the bottom rung of the ladder. Slumming shows us how infinitely more complex and varied the response actually was. . . . [T]he world [Koven] uncovers and its astonishing gallery of characters deserve the attention of a wider readership. . . . How the rich nations treat both the third world and the claims of their own poor is an issue that is very much with us. Koven has done a great service to this continuing debate by charting how the Victorians met—and didn't meet—the challenge to their conscience."—Desmond Ryan, The Philadelphia Inquirerer

"Slumming is a provocative, insightful study of one set of contradictions embedded in the ideology underlying Victorian middle- and upper-class relationships with the poor. . . . Seth Koven has written more than a fine contribution to the historiography of Victorian poverty: this is a book that makes one think, about the present as well as the past."—Deborah Gorham, Labour/Le Travail

"Koven analyzes complex dynamics with non-judgmental subtlety. This fine-tuned approach allows Koven to dissect the uneven power dynamics of slumming a settlement work in a more nuanced fashion than many before him."—Matt Cook, History Workshop Journal

"Slumming is a well-written and -researched book that will be of great use to scholars in history, literature, women's studies, and gay studies. Koven is a gifted writer and has used newspapers, novels, institutional records and newsletters, and several pictures and artworks to make his case. It is also a beautifully produced book, though the absence of a bibliography, particularly in such a thoroughly researched study, is frustrating. Still, Slumming will stimulate historical and literary work for many years; it asks important questions and gives fascinating answers."—Ginger Frost, H-Net

"Slumming is a highly readable and important reassessment of the late Victorian phenomenon of visiting and experiencing the poverty of the East End first-hand. . . . Despite the book's heavily theoretical base, Koven's prose races along, imparting a page-turning quality in places. Koven is excellent at exploring the little-known corners of the world of the 'slummers.'"—Antony Taylor, H-Net Reviews

"Arresting. Koven's scholarship is excellent, and this book will appeal across a wide range of disciplines."—James Epstein, Vanderbilt University

"New, fresh and original. Koven is an indefatigable and energetic researcher, and he looks at cross-class benevolence and the settlement house movement from a new perspective."—Susan Pedersen, Columbia University

"This is a brilliantly crafted, deeply researched, and provocative cultural history. Seth Koven paints a vivid picture of Victorian and Edwardian slummers and the social and sexual politics that impelled their urban journeys. This book is essential reading for cultural critics, historians, urbanists, and scholars of gender and sexuality. It is interdisciplinary history of the highest order."—Judith R. Walkowitz, author of City of Dreadful Delight: Narratives of Sexual Danger in Late-Victorian London

"Slumming adds a new and vital dimension to the modern history of London. Historians have spent much time examining the changing condition of outcast London but little on those whose investigations and explorations revealed that condition. As Seth Koven reveals, 'slumming' was more than a matter of religious or political concern. It was exciting, transgressive, and a way of discovering or releasing another person within the self."—Gareth Stedman Jones, author of Outcast London

"Seth Koven's much awaited Slumming gives us a vivid, authoritative, and astute new history of the Victorian phenomenon that took hundreds of middle-class men and women into urban 'nether worlds' of poverty and deprivation. More than any other previous chronicler of this cultural trend, Koven makes clear that motives for slumming were complex and morally ambiguous. He also reminds us that Victorian renderings of children and the poor inaugurated a tradition of representation in which compassion and voyeurism coexist uncomfortably and, perhaps, inevitably."—Deborah Epstein Nord, author of Walking the Victorian Streets: Women, Representation, and the City

"The stories Seth Koven tells in Slumming and his insights and analyses of them are intriguing and convincing. The reader will be fascinated by his intertwining of sexuality, particularly in its homoerotic dimension, with activities designed to help the poor. This brilliant book helps us better to understand both the past and the present."—Peter Stansky, author of Sassoon: The Worlds of Philip and Sybil

"Subtle, elegant, and insightful, Koven's book explores the remote, difficult world of Victorian philanthropy. It brings to life the wealthy men and women and their relations with poor, and far from deferential, slum-dwellers in all their complexity and confusion. Superbly written and wonderfully readable."—Pat Thane, author of Old Age in English History: Past Experiences, Present Issues

"Slumming is a brilliant exploration of urban class and gender relations as seen through the lens of philanthropy. Koven writes cultural history at its best."—Lynn Hollen Lees, author of The Solidarities of Strangers: The Poor Laws and the People, 1700-1948

"This is a wonderful book, replete with fresh insights about the complex relations between educated Victorians and the urban poor. A rich, compelling addition to our understanding of the past."—Martha Vicinus, University of Michigan, author of Intimate Friends: Women Who Loved Women, 1778-1928