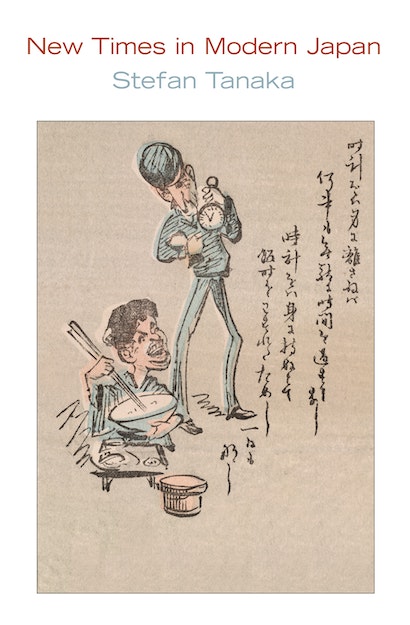 New Times in Modern Japan concerns the transformation of time — the reckoning of time — during Japan’s Meiji period, specifically from around 1870 to 1900. Time literally changed as the archipelago synchronized with the Western imperialists’ reckoning of time. The solar calendar and clock became standard timekeeping devices, and society adapted to the abstractions inherent in modern notions of time. This set off a cascade of changes that completely reconfigured how humans interacted with each other and with their environment — a process whose analysis carries implications for other non-Western societies as well.


By examining topics ranging from geology, ghosts, childhood, art history, and architecture to nature as a whole, Stefan Tanaka explores how changing conceptions of time destabilized inherited knowledge and practices and ultimately facilitated the reconfiguration of the archipelago’s heterogeneous communities into the liberal-capitalist nation-state, Japan. However, this revolutionary transformation — where, in the words of Lewis Mumford, “the clock, not the steam engine,” is the key mechanism of the industrial age — has received little more than a footnote in the history of Japan.


This book’s innovative focus on time not only shifts attention away from debates about the failure (or success) of “modernization” toward how individuals interact with the overlay of abstract concepts upon their lives; it also illuminates the roles of history as discourse and as practice in this reconfiguration of society. In doing so, it will influence discussions about modernity well beyond the borders of Japan.

Stefan Tanaka is Professor of History at the University of California, San Diego. He is the author of Japan's Orient: Rendering Pasts into History.

"Scholars with an interest in the onset and consequences of modernity in Japan will find much in this important new work by Stefan Tanaka to stimulate and challenge them."—Daniel Botsman, Journal of Asian Studies

"Tanaka's analysis and indeed his main conclusions are of a piece with some of the most interesting recent work on South Asia and the Middle East—work that occupies the cutting edge of historical research on the modern non-Western world, with important implications not only for area studies of those regions but generally for world history and for our understanding of modernity as a universal phenomenon. New Times in Modern Japan will be noticed and read with interest not only by scholars in the field of Japanese studies but much more widely."—Partha Chatterjee, author of A Possible India

"Very much a major contribution to the field, New Times in Modern Japan blows fresh air on stale debates. The thrust of the argument, which is as persuasive as it is refreshing, is that becoming modern implies—requires—a new conception and use of time. This logical and well-conceived companion to Tanaka's previous book is poised to enhance Japan's profile in wider discussions of modernity and modernization."—Gerald Figal, Vanderbilt University, author of Civilizations and Monsters: Spirits of Modernity in Meiji Japan