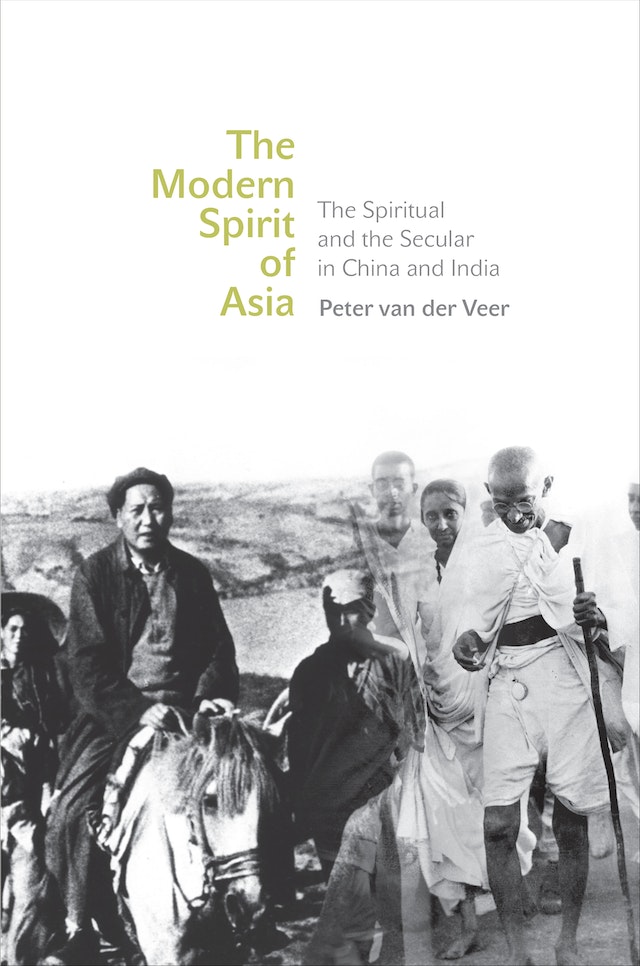 The Modern Spirit of Asia challenges the notion that modernity in China and India are derivative imitations of the West, arguing that these societies have transformed their ancient traditions in unique and distinctive ways. Peter van der Veer begins with nineteenth-century imperial history, exploring how Western concepts of spirituality, secularity, religion, and magic were used to translate the traditions of India and China. He traces how modern Western notions of religion and magic were incorporated into the respective nation-building projects of Chinese and Indian nationalist intellectuals, yet how modernity in China and India is by no means uniform. While religion is a centerpiece of Indian nationalism, it is viewed in China as an obstacle to progress that must be marginalized and controlled.

The Modern Spirit of Asia moves deftly from Kandinsky’s understanding of spirituality in art to Indian yoga and Chinese qi gong, from modern theories of secularism to histories of Christian conversion, from Orientalist constructions of religion to Chinese campaigns against magic and superstition, and from Muslim Kashmir to Muslim Xinjiang. Van der Veer, an outspoken proponent of the importance of comparative studies of religion and society, eloquently makes his case in this groundbreaking examination of the spiritual and the secular in China and India.

Peter van der Veer is director of the Max Planck Institute for the Study of Religious and Ethnic Diversity in Göttingen, Germany, and a Distinguished Professor at Utrecht University in the Netherlands. His books include Imperial Encounters: Religion and Modernity in India and Britain (Princeton) and Religious Nationalism: Hindus and Muslims in India.

"The authority of this study is based on a combination of field research in each of the two nations (China and India), along with an impressive command of the literature and tools of cultural anthropology, comparative sociology, and conceptual analysis. The author is a well-respected, contemporary European social scientist, and this study is likely to stimulate intense scholarly discussion for years ahead."—Choice

"One of the many merits of Peter van der Veer's The Modern Spirit of Asia is that he acknowledges the unprecedented nature of ‘the project of modernity with all its revolutionary ideas of nation, equality, citizenship, democracy, and rights,' yet shows how it has taken strikingly different shapes in the Chinese and Indian cultural spheres."—Benjamin Schewel, Hedgehog Review

"This is an important book, which will be useful for helping scholars of Chinese religion think more deeply about the question of modernity."—Erik Hammerstrom, Review of Religion and Chinese Society

"This book will be a fundamental point of reference for any ethnography of secularism and for anyone interested in the study of religion, secularism, modernity, and politics in Asia and in the global world."—Chiara Letizia, American Anthropologist

"This wonderful book traces the way interactions with Western imperial power have shaped aspects of nationalism in the two emerging Asian giants, China and India. Peter van der Veer knows these two societies intimately, which is one reason why his study is so perceptive and so informative. At once highly readable and scholarly, The Modern Spirit of Asia is strongly recommended for specialists and nonspecialists alike."—Talal Asad, Graduate Center, City University of New York

"This book gives us interactional history at its best. Van der Veer selects four connected concepts—religion, magic, secularity, and spirituality—which are unavoidably defined in relation to each other. He then traces their redefinitions, transformations, and recombinations in the power interactions of the Age of Empire and its aftermath. The result is a set of striking insights about a host of issues, particularly in relation to the modern history of India and China. The Modern Spirit of Asia offers a remarkable example of how fruitful comparative historical sociology can be for our understanding of the present."—Charles Taylor, author of A Secular Age

"Peter van der Veer has written an important book on a fascinating topic. He shows how the secular projects in India and China are central to modernity and state formation in these societies, yet argues that the secular itself is not free from religion, spirituality, and the magical."—Prasenjit Duara, National University of Singapore

"Van der Veer takes seriously the premise that the forms of modernity in India and China must be understood in their own right without prejudging them in relation to Europe, America, or Western scholarship. The Modern Spirit of Asia is a significant, original, and ambitious contribution to the field."—C. J. Fuller, author of The Camphor Flame: Popular Hinduism and Society in India

"This is quite simply a marvelous book. Van der Veer is a major pioneering voice in the study of religion and nationalism in India. He knows and cites the social scientific literature on South Asia like the back of his hand. This book now extends that incisive voice and that expert hand onto a robust comparative and global stage. A moment to be celebrated."—Jeffrey J. Kripal, Rice University