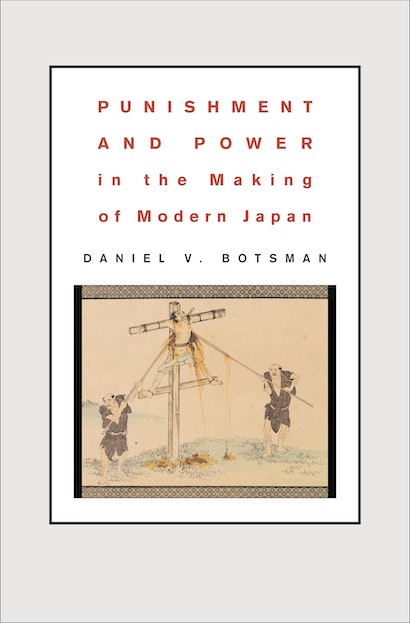 The kinds of punishment used in a society have long been considered an important criterion in judging whether a society is civilized or barbaric, advanced or backward, modern or premodern. Focusing on Japan, and the dramatic revolution in punishments that occurred after the Meiji Restoration, Daniel Botsman asks how such distinctions have affected our understanding of the past and contributed, in turn, to the proliferation of new kinds of barbarity in the modern world.


While there is no denying the ferocity of many of the penal practices in use during the Tokugawa period (1600-1868), this book begins by showing that these formed part of a sophisticated system of order that did have its limits. Botsman then demonstrates that although significant innovations occurred later in the period, they did not fit smoothly into the “modernization” process. Instead, he argues, the Western powers forced a break with the past by using the specter of Oriental barbarism to justify their own aggressive expansion into East Asia. The ensuing changes were not simply imposed from outside, however. The Meiji regime soon realized that the modern prison could serve not only as a symbol of Japan’s international progress but also as a powerful domestic tool. The first English-language study of the history of punishment in Japan, the book concludes by examining how modern ideas about progress and civilization shaped penal practices in Japan’s own colonial empire.

Daniel V. Botsman is Associate Professor of History at the University of North Carolina at Chapel Hill. He has lived in Japan for several years and also taught in the Faculty of Law at Hokkaido University.

"This is a tour-de-force study. . . . Lucid, delightful to read, yet theoretically sophisticated, this is one of the best books on the Tokugawa-Meiji transition in many years."—Mark Ravina, Journal of Asian Studies

"[A] lasting contribution to understanding a subject that many historians of Japan have talked about but few have explored. . . . This is an outstanding social history, richly detailed and insightful, that deserves a wide readership."—Michael Lewis, American Historical Review

"In this fine book Daniel Botsman uses an examination of punishment to argue that imperialism helped to constitute state power in modern Japan. The book also does much more. It explains the relationship between state power and punishment in Japan from the early Tokugawa period to the end of the nineteenth century, and is accessible and based on an impressive mastery of primary and secondary source material."—Robert Eskildsen, Pacific Affairs

"In this impressive volume, Daniel V. Botsman details the history of Japanese punishment and penal reform in the early modern and modern periods. . . . In his view, Japanese penal reform should be interpreted as an example of how external forces—in this case, Western imperialism and the desire for treaty revision—were integral to the formation of modern Japan, rather than such vague notions as 'civilization' and 'progress.'"—Choice

"Botsman's book tries to move past the tendency to see punishment in Tokugawa Japan as harsh and barbaric, or 'uncivilized'. Without denying the ferocity of Tokugawa penal practices, he argues that these were part of a sophisticated system of order that had internal limits and was not simply arbitrary."—F.G. Notehelfer, International History Review

"The penal system and methods of punishment employed by any government have less to do with suppressing crime than with bolstering its authority and enhancing its vision of itself, as Daniel V. Botsman ably demonstrates in this path-breaking study."—Anne Walthall, The Historian

"This is a superb book on a subject of enormous importance—namely, prisons and punishment in Japan from the Tokugawa period (1600-1867) through the beginning of the twentieth century. . . . [The book has] sweeping scope, ambition, conceptual sophistication, and intellectual force. . . . [A]lthough the book is erudite and theoretically sophisticated, it is written in a very clear and accessible manner, ensuring that it can be read with much profit by advanced undergraduates as well as scholars and graduate students inside and outside of Japanese studies."—Takashi Fujitani, Harvard Journal of Asiatic Studies

"This book is an important, systematic account of punishment and prisons in Japan from the Tokugawa period through the nineteenth century. Botsman shows quite well the ways that punishment has transformed over almost three centuries, and connects this to political power. The richness of detail—images of beheadings with a saw, severed heads, crucified bodies, crowded jails, and Benthamlike prisons—will no doubt stay with readers."—Stefan Tanaka, University of California, San Diego, author of New Times in Modern Japan

"I enjoyed reading this book, and learned a lot from it. Botsman avoids both the trap of attributing the rise of a modern penal complex in Japan to some authoritarian essence from time immemorial and the folly of placing all the causative weight on Western imperialism and Western ideas of crime and punishment. Further, he offers an explanation for the methods of colonization that Japanese colonialism adopted when it expanded into Asia. His clearly written work adds the significant experience of Japan to the literature on the emergence of modern systems of punishment and contributes to the comparative understanding of non-Western modernities."—Gyan Prakash, Princeton University, author of Another Reason

"A scholarly tour de force. This book is a unique contribution to a field of historical study that has, in the past, been marked either by a concern for central political institutions or intellectual history. Until now, there has been no serious work on Tokugawa and Meiji penal practices. But Botsman, by weaving the discursive strands of thinking about punishment into the fabric of institutional practice, has managed to give us an exemplary cultural history that exceeds both its temporal and spatial location."—Harry Harootunian, New York University, author of Overcome by Modernity: History, Culture, and Community in Interwar Japan