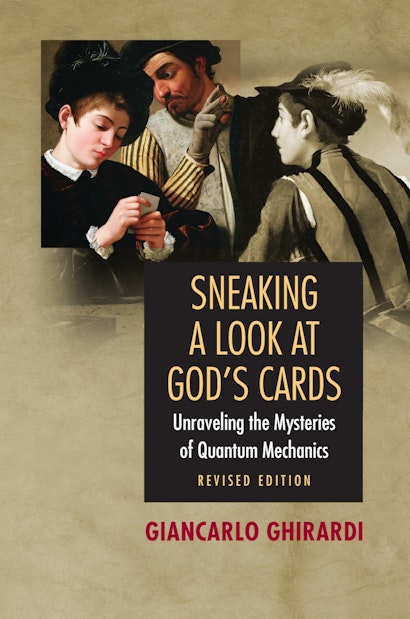 Quantum mechanics, which describes the behavior of subatomic particles, seems to challenge common sense. Waves behave like particles; particles behave like waves. You can tell where a particle is, but not how fast it is moving — or vice versa. An electron faced with two tiny holes will travel through both at the same time, rather than one or the other. And then there is the enigma of creation ex nihilo, in which small particles appear with their so-called antiparticles, only to disappear the next instant in a tiny puff of energy. Since its inception, physicists and philosophers have struggled to work out the meaning of quantum mechanics. Some, like Niels Bohr, have responded to quantum mechanics’ mysteries by replacing notions of position and velocity with probabilities. Others, like Einstein and Penrose, have disagreed and think that the entire puzzle reflects not a fundamental principle of nature but our own ignorance of basic scientific processes.

Sneaking a Look at God’s Cards offers the general reader a deep and real understanding of the problems inherent to the interpretation of quantum mechanics, from its inception to the present. The book presents a balanced overview of current debates and explores how the theory of quantum mechanics plays itself out in the real world. Written from the perspective of a leading European physicist, it looks extensively at ideas from both sides of the Atlantic and also considers what philosophers have contributed to the scientific discussion of this field. Sneaking a Look at God’s Cards sets out what we know about the endlessly fascinating quantum world, how we came to this understanding, where we disagree, and where we are heading in our quest to comprehend the seemingly incomprehensible.

GianCarlo Ghirardi is Chair of the Department of Theoretical Physics at the University of Trieste, Consultant and member of the Academic Board of the International Centre for Theoretical Physics, Trieste, and a coauthor of Symmetry Principles in Quantum Physics.

"From the earliest days of the theory, confusion about its interpretation engendered a continuing series of debates. . . . Ghirardi's book provides a careful, evenhanded and well thought-out introduction to this timely topic."—Peter Woit, American Scientist

"This is an excellent translation of a magnificent book. . . . [T]he Italian physicist GianCarlo Ghirardi gives a non-technical and critical exposition of deep facts about the foundations of quantum mechanics."—Adonai S. Sant' Anna, Mathematical Reviews

"[A] sweeping treatment of one of the most unfathomable yet important scientific frameworks of our time."—Cait Goldberg, Science News

"This remarkable book provides a careful and nontechnical introduction to the fundamental epistemological questions of quantum mechanics. . . . [I]t sets out with an in-depth discussion of the conceptual revolution brought about by the transition from a classical to a quantum description of the physical world. . . . All in all a marvelous and thought provoking book by one of the leading scientists in the field."—M. Kunzinger, Monatschefte für Mathematik

"A modern overview of the state of quantum theory. . . The breadth and depth are very impressive."—Choice

"This is a tremendous and wonderful book for novices and experts alike. It provides a lucid and insightful look into the empirical and conceptual problems handled so successfully by quantum theory. Ghirardi also leads us through the debates concerning the interpretation and meaning of this tantalizing and fascinating theory—debates in which he himself has been one of the major participants."—Bas C. van Fraassen, Princeton University

"This impressive book leads the lay reader to a real understanding of the problems of interpreting quantum mechanics. It is a well-balanced, indeed wise, book, which will stand the test of time as an intellectually responsible introduction to the field. It is also so far as I know the first book at its level to have chapters on the important topics of quantum cryptography and quantum computation."—Jeremy Butterfield, University of Oxford