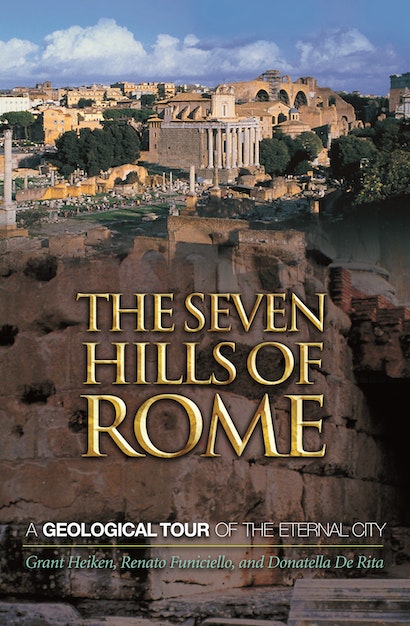 From humble beginnings, Rome became perhaps the greatest intercontinental power in the world. Why did this historic city become so much more influential than its neighbor, nearby Latium, which was peopled by more or less the same stock? Over the years, historians, political analysts, and sociologists have discussed this question ad infinitum, without considering one underlying factor that led to the rise of Rome — the geology now hidden by the modern city.


This book demonstrates the important link between the history of Rome and its geologic setting in a lively, fact-filled narrative sure to interest geology and history buffs and travelers alike. The authors point out that Rome possessed many geographic advantages over surrounding areas: proximity to a major river with access to the sea, plateaus for protection, nearby sources of building materials, and most significantly, clean drinking water from springs in the Apennines. Even the resiliency of Rome’s architecture and the stability of life on its hills are underscored by the city’s geologic framework.


If carried along with a good city map, this book will expand the understanding of travelers who explore the eternal city’s streets. Chapters are arranged geographically, based on each of the seven hills, the Tiber floodplain, ancient creeks that dissected the plateau, and ridges that rise above the right bank. As an added bonus, the last chapter consists of three field trips around the center of Rome, which can be enjoyed on foot or by using public transportation.

Grant Heiken is a past president of the International Association of Volcanology. He is the author or co-author of several professional and general-interest books on geology, including Volcanoes: Crucibles of Change (Princeton). Renato Funiciello is Professor of Geology at the University of Roma Tre and Vice President of the National Institute for Geophysics. Donatella De Rita is Professor of Field Geology and the Geology of Volcanic Areas at the University of Roma Tre.

"Rome we know as a museum of empires and faiths, architecture and art collections: this fascinating little book shows how it may be a museum of the earth as well."—Greg Woolf, Times Literary Supplement

"This is a truly unusual book of great interest to amateur geologists, historians, and travelers."—Library Journal

"A very interesting book on the geology of Rome and how that geology has strongly influenced the city's geography, history, economics, and culture since its earliest settlement."—Choice

"This is a book of delights. A volcanologist and two geologists unpick the fabric of Rome, from its roots of silts and gravels overlain by volcanic flows to the summits of the seven hills."—Maggie McDonald, New Scientist

"Now here's a tourist guide to Rome with a difference. . . .This isn't just a guide. The authors have also set out to awaken people to Rome's geological framework in the hope of making the city itself more sustainable."—Sarah Barnett, Geographical Magazine

"This fascinating and easy-to-read guidebook shows how the geography and geology of Rome allowed it to grow into the great center of civilization that it became. . . . This book is for travelers and readers interested in both history and geology."—Science News

"The writing in this joint Italian-American volume is delightfully clear, and the book is full of helpful illustrations."—Ron Smith, Georgia Review

"This is the only book I'm aware of that fully integrates the culture and history of a city into its geographical and geological setting. Written by three experts in volcanology and in the geology, culture, and history of Rome, the book has much to offer both the general public and professional city planners. The field trips featured provide guidelines that can be effectively applied to other urban settings, and the book provides good sources for further reading and research."—Ian MacGregor, retired Director, Earth Science Division of the National Science Foundation

"It is most fitting that this book, the first of its kind, should be published on Rome, the most fascinating, ancient—but currently thriving—city in the world. The Seven Hills of Rome covers more history and geology than any other travel book I have read, and it draws readers in by helping them understand how the benefits of geographical structure play out in everyday life; for example, the authors demonstrate that the golden wines from the Alban Hills are the result of vineyards located on the tuff plateaus or in crater bottoms. Throughout the book, the reader feels part of a very personal journey through the countryside."—Jill Andrews, California Institute of Technology

"The greatest virtue of The Seven Hills of Rome is that it ties the city's human history to its natural history. Now nonspecialists can fully appreciate the extent to which Rome's destiny, its character, even its very appearance, were founded on its unique geological circumstances."—Rabun Taylor, Harvard University

"Part guidebook, part scholarly resource, all fascinating story, The Seven Hills of Rome weaves together the complex geology and history of Rome's unique locale. The book is throughout a revelation—one that not only illuminates the study of the city's past, but nurtures an appreciation of its present and a concern for its future."—Susan E. Alcock, University of Michigan

"This book is not a typical geological guidebook: it tackles a geology that is largely hidden in an area that has been urban for almost three millennia. As such it is great fun—a treasure hunt in which the reader is invited to piece together the evolution of Rome as part of the Adrian microplate as well as of Rome the city. From temples and quarries to floods, earthquakes and eruptions, all is here. Well researched and never dull, this book offers a brand new insight into an ancient city."—Ruth Siddall, University College, London

"The authors use their expertise to explain how the landscape and natural resources of the region around Rome made it an inviting place for human habitation, and served as inspirations for Romans' achievements in civil engineering, architecture, and construction. The walking tours featured in the book constitute an insider's travel guide, and the chapters on the seven hills are highly evocative and will please the armchair traveler."—Gail Mahood, Stanford University