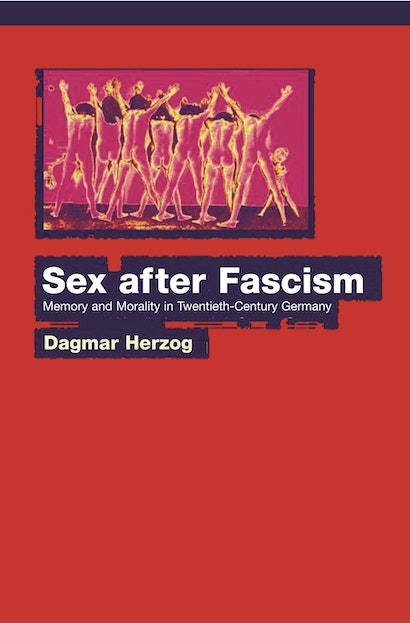 What is the relationship between sexual and other kinds of politics? Few societies have posed this puzzle as urgently, or as disturbingly, as Nazi Germany. What exactly were Nazism’s sexual politics? Were they repressive for everyone, or were some individuals and groups given sexual license while others were persecuted, tormented, and killed? How do we make sense of the evolution of postwar interpretations of Nazism’s sexual politics? What do we make of the fact that scholars from the 1960s to the present have routinely asserted that the Third Reich was “sex-hostile”?


In response to these and other questions, Sex after Fascism fundamentally reconceives central topics in twentieth-century German history. Among other things, it changes the way we understand the immense popular appeal of the Nazi regime and the nature of antisemitism, the role of Christianity in the consolidation of postfascist conservatism in the West, the countercultural rebellions of the 1960s-1970s, as well as the negotiations between government and citizenry under East German communism. Beginning with a new interpretation of the Third Reich’s sexual politics and ending with the revisions of Germany’s past facilitated by communism’s collapse, Sex after Fascism examines the intimately intertwined histories of capitalism and communism, pleasure and state policies, religious renewal and secularizing trends.


A history of sexual attitudes and practices in twentieth-century Germany, investigating such issues as contraception, pornography, and theories of sexual orientation, Sex after Fascism also demonstrates how Germans made sexuality a key site for managing the memory and legacies of Nazism and the Holocaust.

Dagmar Herzog is Professor of History at the Graduate Center, City University of New York. She is the author of Intimacy and Exclusion: Religious Politics in Pre-Revolutionary Baden (Princeton).

"Herzog's book succeeds elegantly as both a scholarly history of sexual morality in Germany and an examination of the way this history is so often distorted in the present day."—Publishers Weekly

"Forcefully argued and elegantly written. . . . Herzog's passionate insistence on the centrality of sexuality as an explanatory category and on the uncomfortably tight link between pleasure and evil provides fresh and bold insight into two of modern German history's most confounding questions: how National Socialism established and maintained its 'extraordinary appeal' and, conversely, how postwar Germans managed to morph so quickly into peaceful stability."—Atina Grossmann, American Historical Review

"Sex after Fascism is one of the best books of the past twenty years on the history of sexuality, and certainly the best book on this particular subject."—Thomas Laqueur, BookForum

"Dagmar Herzog's source-rich and solidly researched analysis surprises and challenges; it convinces over and over again through an unpretentious presentation of forgotten facts and connections. With nuance and yet also with clarity, the American historian shows how human beings who talk about sex are always also talking about other things entirely—and thereby revealing much about themselves."—Urs Rauber, Neue Zürcher Zeitung

"In this forcefully argued and elegantly written book, Dagmar Herzog delivers a truly provocative—in the best sense of thought-and-debate provoking—reconsideration of ruptures and continuities across the three regimes of National Socialism, state socialism, and democratic capitalism 'through the lens' of sexual discourses and practices."—Atina Grossmann, Europe: Early Modern and Modern

"[A] brilliant, deeply researched and beautifully written book. . . . Sex After Fascism is one of the best books of the past twenty years on the history of sexuality, and certainly the best book on this particular subject. But it is also a book for anyone who wants to figure out why homophobia, antifeminism, and a passionate opposition to abortion and premarital sex have become the emotional core of right-wing politics in the United States."—Thomas Laqueur, Artforum International

"This study is highly original, deeply researched, and lucidly written, providing pioneering work on the history of sexuality in twentieth-century Germany and challenging and reshaping the extensive scholarship on memory and the Holocaust."—Mary Nolan, The Historian

"It is hard to imagine a more brilliant, original, and passionate reading of German discourses of sex and fascism, from the 1930s to the present, than this work offers. As scholars dig deeper, they may revise some of Herzog's conclusions. But they will have come to the task in large part because Herzog has so profoundly challenged our thinking on the history of sexuality, Nazism, and its aftermath."—Elizabeth Heineman, Journal of Modern History

"This is a conceptually 'big,' enormously ambitious, and stimulating book, one that tackles head-on a whole range of complex, interesting, and important questions and offers a wealth of convincing and exciting insights. Herzog's discussion of the sexual politics . . . is superb. All in all, whether historians agree or disagree with particular aspects of Herzog's account, the book is a bold contribution, one that will be fruitful not only because it offers readers important and original insights, but also because it will generate important questions."—Edward Ross Dickenson, Central European History

"Dagmar Herzog's study is a magisterial account. . . . Well researched, solidly reasoned, and drawing on a great wealth of resources ranging from low-brow magazines to highly theoretical treatises, it will establish itself as a standard reference work for the study of German civilization and its (post-)modern (dis-)contents."—Frederick A. Lubich, Monatshefte

"[Dagmar Herzog] has succeeded in producing one of the most thought provoking and erudite booles that the field has seen in recent years. Her arguments are impressively grounded in a thorough contextual familiarity with the whole of the twentieth century in Germany. . . . Dagmar Herzog challenges us to think afresh about topics that have sometimes been taboo yet have a crucial bearing on the march of history."—Geoffrey J. Giles, Journal of the History of Sexuality

"Dagmar Herzog's book makes a well founded case that what has become our conventional wisdom about sexuality in Nazi Germany needs to be revised. This is a pioneering work in contemporary history."—Jeffrey Herf, University of Maryland

"Dagmar Herzog's approach is so new and so fresh that it will long serve as a standard for writing the history of sexuality in modern Germany. Basing her account on previously neglected source material from newspapers, advice manuals, church statements, public pronouncements and interviews, she writes with authority and with an enviable grasp of how politics and sex were entwined in the Nazi era and its aftermath. Possessing an amazing ability to cover many different themes and contexts at the same time, she brings her subject into focus with great verve and efficacy."—Anson Rabinbach, Princeton University

"In this superb study, Dagmar Herzog expertly demonstrates that when people talk about sex, they are always talking about much, much more. A major achievement, this book forces us all to think differently about the history of Germany in the twentieth century and illustrates how an historical account that focuses on sexuality can illuminate key aspects of National Socialism, a Germany divided between East and West, and the politics of reunification in the 1990s."—Robert Moeller, University of California, Irvine

"In this powerful, persuasive, and richly documented work, Dagmar Herzog rewrites not only the history of sexuality but also the history of politics and religion in twentieth-century Germany. She offers a fascinating analysis of the emancipatory as well as the repressive elements in sexual discourse under the Third Reich and shows how Nazi ideology continued to shape sexual politics in Germany during the post-war period, even reaching into some of the progressive currents of the Sexual Revolution in the 1960s. Of the many surprises afforded by this widely suggestive and compulsively readable book, perhaps the most disturbing is that we are still living, whether we know it or not, 'after fascism.'"—David Halperin, University of Michigan

"This book is a provocative analysis of the relationship between sexuality and politics in Germany. It debunks popular myths about the Third Reich and the generational revolt and, in the process, draws a sharp contrast between actual changes in behavior and what is remembered. "—Konrad H. Jarausch, University of North Carolina