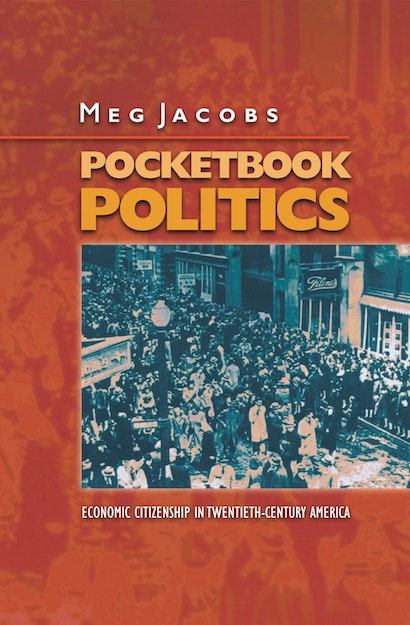 “How much does it cost?” We think of this question as one that preoccupies the nation’s shoppers, not its statesmen. But, as Pocketbook Politics dramatically shows, the twentieth-century American polity in fact developed in response to that very consumer concern.


In this groundbreaking study, Meg Jacobs demonstrates how pocketbook politics provided the engine for American political conflict throughout the twentieth century. From Woodrow Wilson to Franklin Roosevelt to Richard Nixon, national politics turned on public anger over the high cost of living.


Beginning with the explosion of prices at the turn of the century, every strike, demonstration, and boycott was, in effect, a protest against rising prices and inadequate income. On one side, a reform coalition of ordinary Americans, mass retailers, and national politicians fought for laws and policies that promoted militant unionism, government price controls, and a Keynesian program of full employment. On the other, small businessmen fiercely resisted this low-price, high-wage agenda that threatened to bankrupt them.


This book recaptures this dramatic struggle, beginning with the immigrant Jewish, Irish, and Italian women who flocked to Edward Filene’s famous Boston bargain basement that opened in 1909 and ending with the Great Inflation of the 1970s.

Pocketbook Politics offers a new interpretation of state power by integrating popular politics and elite policymaking. Unlike most social historians who focus exclusively on consumers at the grass-roots, Jacobs breaks new methodological ground by insisting on the centrality of national politics and the state in the nearly century-long fight to fulfill the American Dream of abundance.

Meg Jacobs is Associate Professor of American History at the Massachusetts Institute of Technology, She is the co-editor of The Democratic Experiment: New Directions in American Political History (Princeton).

"Meg Jacobs strides boldly through the shards of the old, broken narrative and, with her eye on previously overlooked actors and events, constructs a new story of the rise and fall of the New Deal order. This extraordinary work offers a fresh narrative about American liberalism. . . . [O]ne of the most important pieces of political history this decade."—Jennifer Mittelstadt, Reviews in American History

"Meg Jacobs offers a fresh and persuasive interpretation of major policy developments in the early twentieth century. Pocketbook Politic is a key addition to the growing literature in which the study of consumption promotes synthesis in historical scholarship."—Liette Gidlow, The Journal of American History

"It is a tribute to this first-rate study that it opens up . . . fundamental issues in exciting new ways. Every serious student of modern U.S. political history and political economy will profit from reading Jacobs's path-breaking scholarship."—Robert Collins, EH.NET

"This unapologetic political history [is] refreshingly direct, revealing, and persuasive. It should become a standard text for students of the period."—Gary Cross, Business History Review

"This is one of the most ambitious, original, and wisest books about power in twentieth-century America that I have read in years. With hernarrative about the vital politics of the cost of living, Meg Jacobs hastransformed the scholarship about modern liberals and their opponents on the Right."—Michael Kazin, author of The Populist Persuasion: An American History

"Meg Jacobs has produced an extraordinarily lucid analysis of how consumers allied with trade unions to influence prices and wages. In aprovocative and mind-bending book, she demonstrates how the efforts of quite ordinary people led to political agendas that shaped the twentiet-century state."—Alice Kessler-Harris, author of In Pursuit of Equity: Gender and the Quest for Economic Citizenship in Twentieth-Century America

"Written with unusual narrative power, Pocketbook Politics makes the political economy of purchasing power and mass consumption central to our understanding of modern America. In achieving a fresh analytical narrative of economic ideas, policymaking, and popular politics, this major book forces an engagement with issues and historical understandings long cast in other terms. It also sets a standard for the new political history its author has done so much to promote."—Ira Katznelson, Ruggles Professor of Political Science and History, Columbia University

"Meg Jacobs has written a highly significant book that, by illuminating major transitions in twentieth-century politics, recasts our understanding of the relationship of politics, state building, economic policy, labor unions, and consumer culture."—Daniel Horowitz, author of The Anxieties of Affluence: Critiques of American Consumer Culture, 1939-1979