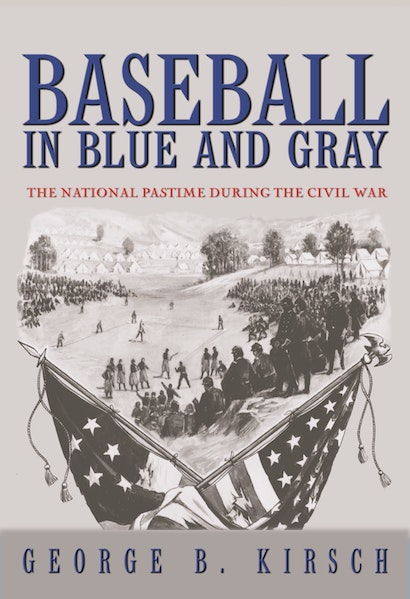 During the Civil War, Americans from homefront to battlefront played baseball as never before. While soldiers slaughtered each other over the country’s fate, players and fans struggled over the form of the national pastime. George Kirsch gives us a color commentary of the growth and transformation of baseball during the Civil War. He shows that the game was a vital part of the lives of many a soldier and civilian — and that baseball’s popularity had everything to do with surging American nationalism.


By 1860, baseball was poised to emerge as the American sport. Clubs in northeastern and a few southern cities played various forms of the game. Newspapers published statistics, and governing bodies set rules. But the Civil War years proved crucial in securing the game’s place in the American heart. Soldiers with bats in their rucksacks spread baseball to training camps, war prisons, and even front lines. As nationalist fervor heightened, baseball became patriotic. Fans honored it with the title of national pastime. War metaphors were commonplace in sports reporting, and charity games were scheduled. Decades later, Union general Abner Doubleday would be credited (wrongly) with baseball’s invention. The Civil War period also saw key developments in the sport itself, including the spread of the New York-style of play, the advent of revised pitching rules, and the growth of commercialism.


Rich with anecdotes and surprising facts, this narrative of baseball’s coming-of-age reveals the remarkable extent to which America’s national pastime is bound up with the country’s defining event.

George B. Kirsch is Professor of History at Manhattan College and the author of several books, including The Creation of American Team Sports. He is the editor of two volumes of Sports in North America: A Documentary History and the general editor of the Encyclopedia of Ethnicity and Sports in the United States.

"Kirsch examines the emerging organizational sophistication of urban and collegiate baseball on the home front, and he sketches out the social and racial contours of what was already often seen as the national game. . . . A careful scholar, he savors using evidence to demolish myth."—Choice

"The book is a pleasure to read, and deserves numerous votes for the current literary All-Star Game."—David Wee, American Historical Review

"George P. Kirsch has written an interesting, readable book about the sport's growth during the Civil War that teaches readers how the game evolved into the national pastime."—Jeff Diamant, Newark Star-Ledger

"Although baseball shares the public stage with other sports nowadays, it is still the professional sport most prominent in American historical consciousness. George B. Kirsch's book offers an intriguing look at the very early years of baseball, which were intertwined with the crucible of the Civil War. . . . Overall, this is a solid examination of the subject and will be of interest to sports and baseball historians, in particular, but also those scholars and general readers interested in the social history of the Civil War."—John Sickels, Civil War History

"This fine social history tells a very powerful story, and one that will stir a lot of interest. It is full of lively analysis and overflowing with fascinating research. The author has done a splendid job of putting his material into an enticing format that draws the reader into an absorbing narrative. He makes a compelling case that the stories of baseball and the epic of the Civil War were inextricably bound."—Catherine Clinton, author of Fanny Kembel's Civil Wars

"This book, written in a straightforward and accessible style, is clearly the most complete book on baseball in the Civil War era yet written."—Jules Tygiel, author of Past Time: Baseball as History

"This is an impressive work on Civil War baseball that shows a sport developing and growing even as war raged—a testament to the popularity of the game. Kirsch recounts the stories of the early players who answered the call for service, does a fine and honest job of discussing the baseball-in-prison issue, and covers the early history of the game itself in a pleasing manner."—Randy Roberts, author of John Wayne America