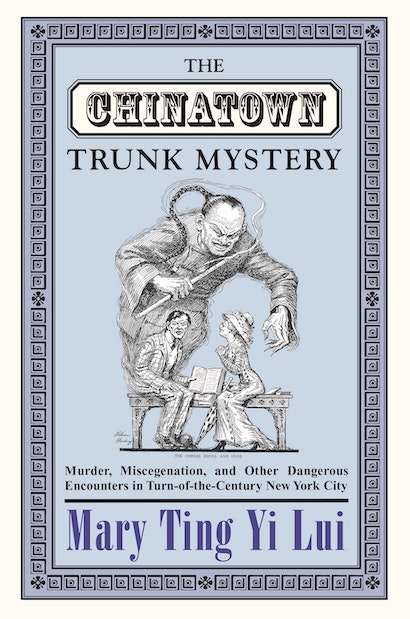 In the summer of 1909, the gruesome murder of nineteen-year-old Elsie Sigel sent shock waves through New York City and the nation at large. The young woman’s strangled corpse was discovered inside a trunk in the midtown Manhattan apartment of her reputed former Sunday school student and lover, a Chinese man named Leon Ling.


Through the lens of this unsolved murder, Mary Ting Yi Lui offers a fascinating snapshot of social and sexual relations between Chinese and non-Chinese populations in turn-of-the-century New York City. Sigel’s murder was more than a notorious crime, Lui contends. It was a clear signal that attempts to maintain geographical and social boundaries between the city’s Chinese male and white female populations had failed.


When police discovered Sigel and Leon Ling’s love letters, giving rise to the theory that Leon Ling killed his lover in a fit of jealous rage, this idea became even more embedded in the public consciousness. New Yorkers condemned the work of Chinese missions and eagerly participated in the massive national and international manhunt to locate the vanished Leon Ling.


Lui explores how the narratives of racial and sexual danger that arose from the Sigel murder revealed widespread concerns about interracial social and sexual mixing during the era. She also examines how they provoked far-reaching skepticism about regulatory efforts to limit the social and physical mobility of Chinese immigrants and white working-class and middle-class women.


Through her thorough re-examination of this notorious murder, Lui reveals in unprecedented detail how contemporary politics of race, gender, and sexuality shaped public responses to the presence of Chinese immigrants during the Chinese exclusion era.

Mary Ting Yi Lui is Assistant Professor of American Studies and History at Yale University. She is a former curator of the Museum of Chinese in the Americas in New York City.

"Lui has created a solid historical narrative through her combined use of empirical data and Chinese-language sources. . . . [Her] work deserves to be recognized as an important contribution to American history."—Krystyn Moon, American Historical Review

"This is an outstandingly well researched and elegantly executed book, rich in detail, theoretical insight, and contemporary illustration drawn from the archives, and at times great fun. . . . [I]t sets a new high standard for writing about the Asian American experience."—Gregor Benton, Ethnic and Racial Studies

"[A] magnificent social history. . . . [T]he book's graceful style, along with its vivid, engaging narratives and insightful analyses, is certain to be appreciated and enjoyed beyond the scholarly community."—Renqiu Yu, Journal of American History

"Lui, in this provocative and compelling study, demonstrates how America's racial and gender formations were mapped onto the dynamic and urban landscape of New York's Chinatown. This book is highly recommended."—Karen J. Leong, The Historian

"This is a fantastic book, overflowing with groundbreaking empirical research and rich with historical detail. The author has gathered an enormous range of newspaper and archival material, as well as prints and illustrations, and her detective work is amazing in its depth. She is particularly strong in detailing the historical fascination and obsessions with interracial sexual relationships, using the murder case of Elsie Sigel to narrate white American conceptions of Chinatown and Chinese men as a threat to white women."—Henry Yu, University of California, Los Angeles

"Mary Ting Yi Lui creatively employs a forgotten but important crime as a narrative vehicle to show that New York's Chinatown was not a neighborhood of racial exclusion and ethnic isolation. Rather, the author convincingly argues that Chinatown's borders were not fixed or impenetrable as suggested by past journalist and scholarly studies. She offers a nuanced and accurate interpretation of the Chinese-American experience, challenging one of the most enduring racial stereotypes in American historical literature."—Timothy J. Gilfoyle, Loyola University