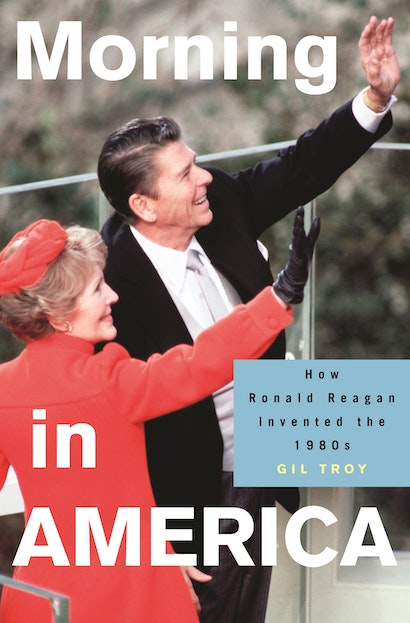 Did America’s fortieth president lead a conservative counterrevolution that left liberalism gasping for air? The answer, for both his admirers and his detractors, is often “yes.” In Morning in America, Gil Troy argues that the Great Communicator was also the Great Conciliator. His pioneering and lively reassessment of Ronald Reagan’s legacy takes us through the 1980s in ten year-by-year chapters, integrating the story of the Reagan presidency with stories of the decade’s cultural icons and watershed moments-from personalities to popular television shows.


One such watershed moment was the 1984 Los Angeles Olympics. With the trauma of Vietnam fading, the triumph of America’s 1983 invasion of tiny Grenada still fresh, and a reviving economy, Americans geared up for a festival of international harmony that-spurred on by an entertainment-focused news media, corporate sponsors, and the President himself-became a celebration of the good old U.S.A. At the Games’ opening, Reagan presided over a thousand-voice choir, a 750-member marching band, and a 90,000-strong teary-eyed audience singing “America the Beautiful!” while waving thousands of flags.


Reagan emerges more as happy warrior than angry ideologue, as a big-picture man better at setting America’s mood than implementing his program. With a vigorous Democratic opposition, Reagan’s own affability, and other limiting factors, the eighties were less counterrevolutionary than many believe. Many sixties’ innovations went mainstream, from civil rights to feminism. Reagan fostered a political culture centered on individualism and consumption-finding common ground between the right and the left.


Written with verve, Morning in America is both a major new look at one of America’s most influential modern-day presidents and the definitive story of a decade that continues to shape our times.

Gil Troy, a native of Queens, New York, is Professor of History at McGill University. He is the author of Mr. and Mrs. President: From the Trumans to the Clintons (Kansas), an updated, paperback edition of Affairs of State: The Rise and Rejection of the Presidential Couple Since World War II (Free Press); and of See How They Ran: The Changing Role of the Presidential Candidate (Free Press).

"A lively, sprawling work that sees Reagan's reflection in everything from '80s TV shows such as Dynasty to the rejection of 'New Coke' by consumers to the creation of CNN and USA TODAY. . . . He may have disregarded the rise of AIDS and seemed clueless about the rise in homelessness during his watch, but he also helped create 'an Era of Good Feelings' that left most Americans feeling better about themselves and their country."—Susan Page, USA TODAY

"Morning in America is the rarest of academic histories: insightful, energetic, and a joy to read."—Peter Schweizer, The New York Sun

"[A] masterly study of Ronald Reagan's presidency—the best single book we have on his administration to date."—David Turner, Raleigh News & Observer

"The main thing Troy has produced is a portrait of the United States in the 1980s in all of its color and texture. . . . [T]he book is a mine of information on U.S. popular culture, presented by one who lived through those times."—Norman Webster, Montreal Gazette

"A balanced, thoughtful, and thoroughly entertaining account of Reagan's legacy. . . . This book is sure to become popular and deserves a large audience. Enthusiastically recommended."—Library Journal

"A valuable and enjoyable book. . . . Troy's readable book is impressive in its integration of political and social history, while he rightly recognizes that popular culture can provide an effective gauge of the public mood. Thus, he effectively uses the television series Hill Street Blues to illustrate attitudes towards crime and race, and throughout, he uses television, film, and popular music. Troy is anything but a Reagan cheerleader, and he stresses the still contentious nature of the Reagan record."—Philip Jenkins, Books & Culture

"Reagan remains our national Rorschach test, a good guide to what we think about the issues of our time. . . . With a year-by-year analysis of the 80's, set in the context of popular culture, Mr. Troy measures the social and cultural consequences of Reagan's free-market agenda. Optimism, individualism, consumerism and even hedonism promote prosperity. But they can—and Mr. Troy believes they did—dilute a sense of community and civic virtue, devalue a nation's social capital, and accelerate the descent into alienation and cynicism."—Glenn C. Altschuler, New York Observer

"Troy not only captures Reagan the leader but also the watershed decade he dominated and defined."—Bill Pierce, Toronto Sun

"Troy's book . . . cannot help being engaging, packed as it is with memorabilia of the Reagan years. . . . Troy . . . makes a communitarian critique of the Reagan era. He is on solid ground in contending that America became more individualistic and materialistic under Regan, and also in noting that the trend predated and postdated his presidency."—Ramesh Ponnuru, Claremont Review of Books

"One of Troy's key points is that our memory of Reagan makes his reign seem either more idyllic or more tyrannical than it was in reality. . .. Gil Troy has given us a fascinating look at a crucial decade."—Timothy Barney, Rhetoric and Public Affairs

"I thoroughly enjoyed every single chapter of Morning in America! Gil Troy has written a wonderful book: important, full of fresh insights, and fun to read. I especially like how he weaves the cultural phenomena of the time with Reagan's personal qualities and influence, showing how Reagan was affected by the culture around him and how he changed it."—Lesley Stahl, Correspondent, 60 Minutes

"Bravo! Gil Troy's readable, entertaining, and compelling book does a masterful job of capturing the challenges Ronald Reagan and I faced in office. This superb book's original insight into the linkage between politics and culture not only explains what happened during Reagan's presidency and the 1980s, it offers essential insight into the continuing debates about the key challenges facing North Americans today."—The Right Honourable Brian Mulroney, Former Prime Minister of Canada

"Lively and insightful; will equally fascinate admirers and detractors of the Reagan presidency."—David Frum, author of How We Got Here: The 70s—The Decade That Brought You Modern Life

"This fast-paced, consistently readable book successfully combines two difficult tasks. It is at once a first-rate interpretive presidential history and a stimulating exposition of the culture of the 1980s. Troy has given us a sweeping, balanced—and indispensable—account of the Reagan Era."—Alonzo L. Hamby, Ohio University, author of For the Survival of Democracy: Franklin Roosevelt and the World Crisis of the 1930s

"This remarkable book is well structured, replete with insight and fresh interpretations, nuanced, and written with verve and passion. Reading it was both thoroughly enjoyable and thoroughly informative."—Bruce Schulman, Boston University, author of The Seventies