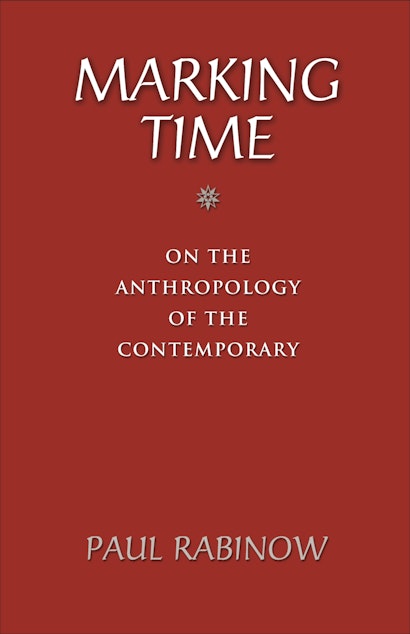 In Marking Time, Paul Rabinow presents his most recent reflections on the anthropology of the contemporary. Drawing richly on the work of Michel Foucault, John Dewey, Niklas Luhmann, and, most interestingly, German painter Gerhard Richter, Rabinow offers a set of conceptual tools for scholars examining cutting-edge practices in the life sciences, security, new media and art practices, and other emergent phenomena. Taking up topics that include bioethics, anger and competition among molecular biologists, the lessons of the Drosophila genome, the nature of ethnographic observation in radically new settings, and the moral landscape shared by scientists and anthropologists, Rabinow shows how anthropology remains relevant to contemporary debates. By turning abstract philosophical problems into real-world explorations and offering original insights, Marking Time is a landmark contribution to the continuing re-invention of anthropology and the human sciences.

Paul Rabinow is professor of anthropology at the University of California, Berkeley, and the author, most recently, of A Machine to Make a Future: Biotech Chronicles (Princeton).

"This essay is an intellectual pause in an active scholarly career. . . . Rabinow contemplates the automation of science and art, where art becomes nature and nature art."—C.S. Peebles, Choice

"[T]his book deserves a readership beyond anthropologists and scholars in science and technology studies. Read more generously, Rabinow's conversations with historians and philosophers (both ancient and modern), critics of art and literature, and artists and scientists could shed light on the problems of designing inquiry into the ethos and logos of any time."—Natasha Myers, Isis

"Paul Rabinow has proved again that he is one of our most incisive commentators on the vital question of our time-what it means to be human today. The reflections gathered in this book engage with the question from a remarkable array of starting points-from speculative philosophical histories through the artisanship of painting to the creative labor that sequenced the genome of the fruit fly. In the process, he delineates a methodology for the anthropology of the contemporary that is productive and provocative in equal measure."—Nikolas Rose, London School of Economics and Political Science

"Marking Time is a gem of insight and a journey of learning. These essays offer an intellectual adventure to be enjoyed by a broad range of readers."—George Marcus, University of California, Irvine

"Paul Rabinow offers us a sustained piece of thought on the meaning of the contemporary for anthropology, with the goal of discovering 'new problems and new truths that open up points of view and new sciences.' Boldly eschewing use of the 'ethnographic record' to address major philosophical questions, Rabinow instead detours through ancient Greece, Rome in late antiquity, his own research with various genome mapping projects, and a dialogue with many German philosophers, to arrive at concepts that help us write in a mediated mode, where one's insights come from finding modes of observing in close proximity that are appropriate to the objects and events to be explained."—John Borneman, Princeton University