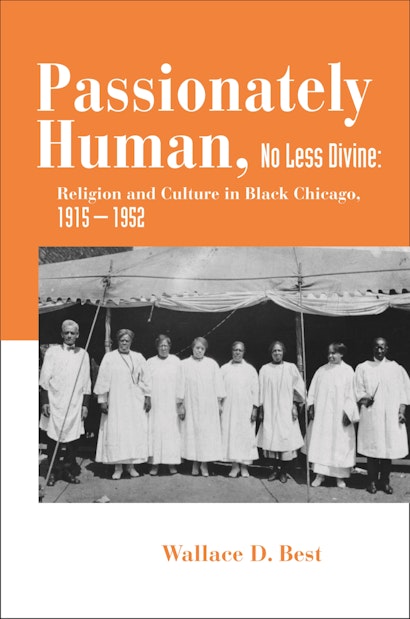 The Great Migration was the most significant event in black life since emancipation and Reconstruction. Passionately Human, No Less Divine analyzes the various ways black southerners transformed African American religion in Chicago during their Great Migration northward. A work of religious, urban, and social history, it is the first book-length analysis of the new religious practices and traditions in Chicago that were stimulated by migration and urbanization.


The book illustrates how the migration launched a new sacred order among blacks in the city that reflected aspects of both Southern black religion and modern city life. This new sacred order was also largely female as African American women constituted more than 70 percent of the membership in most black Protestant churches.

"Passionately Human, No Less Divine is both meticulously researched and carefully written. Wallace Best has performed a thorough investigation of migration-era black churches that will benefit anyone interested in the shape of African-American religion and culture since."—Josef Sorett, Journal for the Scientific Study of Religion

"Best's work opens the way for further research into the complexities of, not only African American religion, but also other religious traditions that have likewise suffered from historically inaccurate and ideologically suspect scholarly analyses. Scholars interested in urban and African American religion will find this text immensely rewarding. And to those interested in the effect that the southern religious ethos has had on the broader spectrum of American religion, this text is essential reading."—Adam Stewart, University of Waterloo

"This work makes a substantial and insightful contribution to the study of African-American Christianity and culture and, in particular, the role of the poor in the reconceptualisation of black faith."—Graham Duncan, Historiae Ecclesiasticae

"This is a very significant contribution to the field. Best creates a convincing revision of the older interpretation of religion and migration in Chicago."—Albert J. Raboteau, Princeton University

"Best's work is rich, exciting, sophisticated and nuanced. It presents a new model for research on black religiosity that is long overdue."—Kimberley Phillips, College of William and Mary

"We've been waiting for this book for many years. Wallace Best understands both the content and meaning of the religious practice associated with the Great Migration better than just about anyone who has studied this event. In Passionately Human, No Less Divine, Best insightfully explores the Great Migration's transformation of the relationship between religious culture and civic culture in American cities—and thereby transforms our understanding of this 'journey of faith.'"—James Grossman, Vice-President, The Newberry Library, and co-editor of The Encyclopedia of Chicago