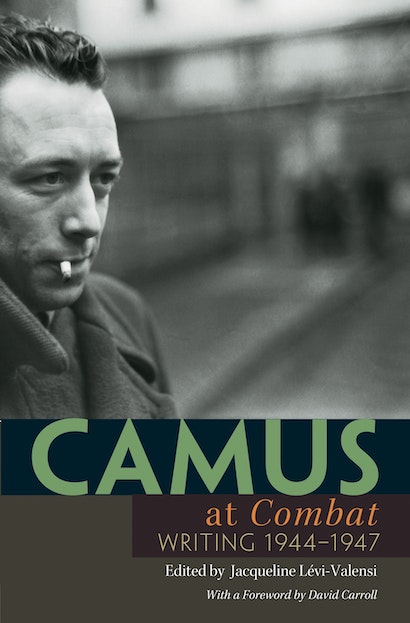 Paris is firing all its ammunition into the August night. Against a vast backdrop of water and stone, on both sides of a river awash with history, freedom’s barricades are once again being erected. Once again justice must be redeemed with men’s blood.
?


Albert Camus (1913-1960) wrote these words in August 1944, as Paris was being liberated from German occupation. Although best known for his novels including The Stranger and The Plague, it was his vivid descriptions of the horrors of the occupation and his passionate defense of freedom that in fact launched his public fame.


Now, for the first time in English, Camus at ‘Combat’ presents all of Camus’ World War II resistance and early postwar writings published in Combat, the resistance newspaper where he served as editor-in-chief and editorial writer between 1944 and 1947. These 165 articles and editorials show how Camus’ thinking evolved from support of a revolutionary transformation of postwar society to a wariness of the radical left alongside his longstanding strident opposition to the reactionary right. These are poignant depictions of issues ranging from the liberation, deportation, justice for collaborators, the return of POWs, and food and housing shortages, to the postwar role of international institutions, colonial injustices, and the situation of a free press in democracies. The ideas that shaped the vision of this Nobel-prize winning novelist and essayist are on abundant display.


More than fifty years after the publication of these writings, they have lost none of their force. They still speak to us about freedom, justice, truth, and democracy.

Jacqueline Lévi-Valensi (1932-2004) was Emeritus Professor and Dean of Literature at University de Picardie, in Amiens, and France's leading scholar on Camus. David Carroll is Professor of French at the University of California, Irvine. His books include French Literary Fascism (Princeton). Arthur Goldhammer has translated more than ninety books from the French. In 1996 he was named Chevalier de l'Ordre des Arts et des Lettres by the French Minister of Culture.

"As Camus at 'Combat', a new collection of his editorials . . . makes plain, the experience, first, of the Nazi occupation of France, and then of the struggle of Algerian independence against France led him to conclude that the 'primitive' impulse to kill and torture shared a taproot with the habit of abstraction, of thinking of other people as a class of entities."—Adam Gopnik, The New Yorker

"France's preeminent Camus scholar before passing away in 2004, here presents 165 of the articles Camus wrote . . . for the clandestine French Resistance newspaper Combat. The later articles are less enthusiastic than the earlier ones, reflecting Camus's gradual belief that there were three failures of French democracy after the war: France's inability to deal with war crimes and criminals; its failure to bring democracy to its colonial possessions, Indochina and Algeria; and the incapacity of the French press to remain free of outside influences."—Bob Ivey, Library Journal

"The value of this comprehensive (and exhaustively footnoted) volume is to exhibit the quotidian political thought of a great humanist as he turned his attention from the triumph of the Resistance to the much messier task of building a new France out of the war's detritus."—San Francisco Chronicle

"Albert Camus called the 20th century 'the century of fear', but he may as well have been writing about the 21st. Although written more than 50 years ago, his editorials for the Resistance newspaper Combat in the postwar period are uncannily resonant today."—Fiona Capp, The Age

"A stirring, if occasionally arcane, book that puts Camus back into his historical context. Here is Camus frothing at the mouth about collaborators and beating the drum loudly for his countrymen to get involved in creating a new democracy."—John Freeman, Denver Post

"[E]xpertly edited by Jacqueline Levi-Valensi. In her hands his work becomes an affecting account of France in the years of crisis, and at the same time the portrait of a brilliant and principled man dealing with slippery, intractable reality."—Robert Fulford, National Post

"This remarkable book presents for the first time in English all of Camus's Combat writings. . . . This is political journalism at its best. As editorialist and editor in chief of Combat, Camus urged his readers to purge themselves of dogmatism, pursue justice rather than vengeance, denounce ideologies, and insist on freedom of the press. Responding to daily events 60 years ago, these pieces still resonate powerfully today in an era of global conflict."—Choice

"The first complete English-language translation of Camus's wartime journalism, this important book offers both a moving portrayal of life under the Occupation and a fascinating glimpse at the evolution of the author's thinking."—France

"These beautifully translated articles . . . are as worth reading in 2006 as they were in 1946. Camus never wavered on a demand that many other philosophers and writers of his time deemed naïve: for morality in politics, born out of a conviction that political choices are ethical in essence."—Stanley Hoffman, Foreign Affairs

"It is astonishing to see how many of the issues on which Camus comments, and which were broached by the situation in which he was writing, anticipate and prefigure problems that continue to afflict us today. In his commentaries, Camus never stays on the surface of the events that provide his starting point; he is always searching for the deeper causes—moral, social, psychological, or ultimately religious (though he was not a believer of any kind)—that motivate human behavior. For this reason, many of these occasional writings still live."—Joseph Frank, The New Republic

"Anyone interested in Camus' development as a writer should also be eager to read [these articles. ]. . . [O]f the myriad volumes on contemporary politics that appear in bookstores festooned with 'must-read' blurbs, none is more important than this collection of sixty-year-old editorials. . . . [T]here is a coherence as well as an expansiveness to his writing that transcends the normal limitations of the editorial form."—Michael McDonald, American Interest

Praise for the French edition: "A wonderful book. In 1944 Camus had already published The Stranger and The Myth of Sisyphus. But it was his daily editorials in the resistance newspaper Combat that made him famous, and he emerged from the war as a moral and intellectual leader of postwar France."—Alice Kaplan, Duke University, author of The Collaborator: The Trial and Execution of Robert Brasillach