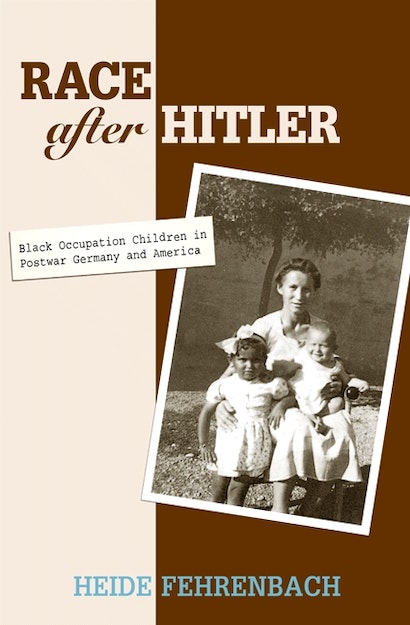 When American victors entered Germany in the spring of 1945, they came armed not only with a commitment to democracy but also to Jim Crow practices. Race after Hitler tells the story of how troubled race relations among American occupation soldiers, and black-white mixing within Germany, unexpectedly shaped German notions of race after 1945. Biracial occupation children became objects of intense scrutiny and politicking by postwar Germans into the 1960s, resulting in a shift away from official antisemitism to a focus on color and blackness.


Beginning with black GIs’ unexpected feelings of liberation in postfascist Germany, Fehrenbach investigates reactions to their relations with white German women and to the few thousand babies born of these unions. Drawing on social welfare and other official reports, scientific studies, and media portrayals from both sides of the Atlantic, Fehrenbach reconstructs social policy debates regarding black occupation children, such as whether they should be integrated into German society or adopted to African American or other families abroad. Ultimately, a consciously liberal discourse of race emerged in response to the children among Germans who prided themselves on — and were lauded by the black American press for — rejecting the hateful practices of National Socialism and the segregationist United States.


Fehrenbach charts her story against a longer history of German racism extending from nineteenth-century colonialism through National Socialism to contemporary debates about multiculturalism. An important and provocative work, Race after Hitler explores how racial ideologies are altered through transnational contact accompanying war and regime change, even and especially in the most intimate areas of sex and reproduction.

Heide Fehrenbach is Professor of History at Northern Illinois University. She is the author of Cinema in Democratizing Germany: Reconstructing National Identity after Hitler and coeditor of Transactions, Transgressions, Transformations: American Culture in Western Europe and Japan.

"This thoughtful and carefully researched book represents some of the best scholarship being done on postwar Germany today."—Patricia Mazón, American Historical Review

"Fehrenbach has presented us with an interesting story of race, gender, and foreign policy and has ingeniously combined social and cultural history."—Heike Bungertt, Journal of American History

"The book contains such a wealth of new information and surprising insights that it can be recommended without reservation."—Reiner Pommerin, Historische Zeitschrift

"Fehrenbach adroitly portrays the subtle paths of the 'devolution' of German racial attitudes and makes an original, insightful contribution to postwar German studies."—Choice

"As an expertly argued and eloquently written study, Race After Hitler will certainly be of interest to a broad audience. The book has much to say about transnational constructions and articulations of race, gender and ethnicity as well as about the postwar democratization and transformation of West Germany."—Robbie Aitken, H-Net Reviews

"Heide Fehrenbach's Race after Hitler is a major contribution to both the history of Germany and the United States in the decade and a half after 1945. . . . Race after Hitler is a very stimulating book. Whether the subjects addressed would be new to American scholars, I cannot say. Fehrenbach scoured the archives, journals, and newspapers in the United States and Germany to produce a beautifully written book that raises many questions about the continuation of racial thinking among Germans and Americans in the decade and a half after 1945. Like any important book, it should motivate younger scholars to move into the budding field of African American, Afro-German, and German history."—Kenneth Barkin, Journal of African American History

"Clearly written, forcefully argued, very well researched and documented, and highly original, Race after Hitler is a major contribution to our understanding of the transformation of postwar German society and its complex relationship with the United States. This book will also be of great interest to students of gender, race, and ethnicity. A truly splendid accomplishment."—Omer Bartov, Brown University

"Heide Fehrenbach has written a fascinating and compelling tale of the children born after 1945 of unmarried German mothers and African American GI fathers. This brilliant example of the new international history will attract a wide readership on both sides of the Atlantic."—Thomas Borstelmann, coauthor of Created Equal

"At once sophisticated in concept and fully accessible, Race after Hitler is written with the mature fluency and authoritativeness of a seasoned historian and storyteller. The book is full of rich and evocative evidence and persuasive arguments that will give students and specialists alike much to debate and ponder."—Dagmar Herzog, Graduate Center, City University of New York

"Race after Hitler will have a significant impact that extends well beyond the community of those who study modern German history. It offers extremely interesting insights into how to think about the categories in which racial difference is articulated and expressed, and provides an exceptionally rich model of how to write a complex historical account. It is a major accomplishment that will change the way we think about German attitudes toward race in the aftermath of the Third Reich."—Robert Moeller, University of California-Irvine

"An exemplary model of the new transnational history with a strongly sociocultural bent, Heide Fehrenbach's pathbreaking book will be of great interest to historians of the United States and Germany alike."—V. R. Berghahn, Columbia University