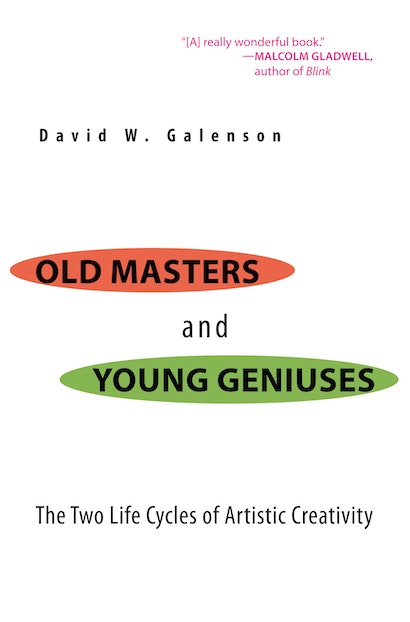 When in their lives do great artists produce their greatest art? Do they strive for creative perfection throughout decades of painstaking and frustrating experimentation, or do they achieve it confidently and decisively, through meticulous planning that yields masterpieces early in their lives?


By examining the careers not only of great painters but also of important sculptors, poets, novelists, and movie directors, Old Masters and Young Geniuses offers a profound new understanding of artistic creativity. Using a wide range of evidence, David Galenson demonstrates that there are two fundamentally different approaches to innovation, and that each is associated with a distinct pattern of discovery over a lifetime.


Experimental innovators work by trial and error, and arrive at their major contributions gradually, late in life. In contrast, conceptual innovators make sudden breakthroughs by formulating new ideas, usually at an early age. Galenson shows why such artists as Michelangelo, Rembrandt, Cézanne, Jackson Pollock, Virginia Woolf, Robert Frost, and Alfred Hitchcock were experimental old masters, and why Vermeer, van Gogh, Picasso, Herman Melville, James Joyce, Sylvia Plath, and Orson Welles were conceptual young geniuses. He also explains how this changes our understanding of art and its past.


Experimental innovators seek, and conceptual innovators find. By illuminating the differences between them, this pioneering book provides vivid new insights into the mysterious processes of human creativity.

David W. Galenson is a professor in the Department of Economics and the College at the University of Chicago, and a research associate of the National Bureau of Economic Research. He is the author of several books, including Painting Outside the Lines: Patterns of Creativity in Modern Art.

"Galenson's idea that creativity can be divided into these types—conceptual and experimental—has a number of important implications."—Malcolm Gladwell, New Yorker

"David Galenson has developed something approaching a unified theory of art . . . [that] does a surprisingly good job of explaining the relative value of the world's great paintings. . . . While Mr. Galenson has been studying the art world over the last five years, all sorts of other fields have been engaged in their own debate about judgment versus rules. . . . When the traditionalists in these fields describe their skepticism of statistics, they sometimes make the argument that their craft is as much art as it is science. That's a nice line, but the next time you hear it, think back to Mr. Galenson's work. Even art, it turns out, has a good bit of science to it."—David Leonhardt, The New York Times

"After a decade of number crunching, Galenson, at the not-so-tender age of 55, has fashioned something audacious and controversial: a unified field theory of creativity. Not bad for a middle-aged guy. What have you done lately?"—Daniel Pink, Wired

"[A] really wonderful book. . . . There's something important to be learned about the way our minds work by entertaining the notion that there are two very different styles of creativity, the Picasso and the Cézanne."—Malcolm Gladwell, author of Blink

"Beautifully written, well argued, and an exciting read, Old Masters and Young Geniuses is a strikingly novel interpretation of the creative process by a leading scholar in the economics of the arts. It realizes the exceedingly rare accomplishment of providing a fresh way of looking at the careers of the greatest artists of Western civilization."—William N. Goetzmann, documentary filmmaker, coauthor of The West of the Imagination, Edwin J. Beinecke Professor of Finance, Yale School of Management

"A very well written and intellectually stimulating piece of scholarship that deserves to be widely read and debated."—Dean Keith Simonton, author of Creativity in Science: Chance, Logic, Genius, and Zeitgeist, Distinguished Professor of Psychology, University of California, Davis

"This extremely lucid, logical book is very much a voyage of discovery, exploring different ways of extending the author's theory of the two polar types of creative behavior to all forms of artistic and intellectual activity. As with all truly original work, it will be controversial."—Robert Jensen, author of Marketing Modernism in Fin-de-Siècle Europe, Associate Professor of Art History, University of Kentucky