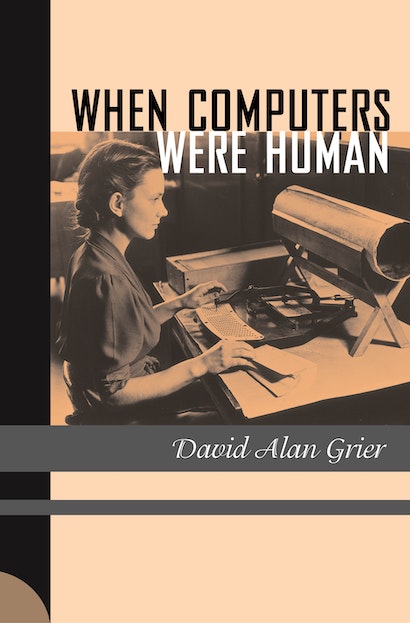 Before Palm Pilots and iPods, PCs and laptops, the term “computer” referred to the people who did scientific calculations by hand. These workers were neither calculating geniuses nor idiot savants but knowledgeable people who, in other circumstances, might have become scientists in their own right. When Computers Were Human represents the first in-depth account of this little-known, 200-year epoch in the history of science and technology.


Beginning with the story of his own grandmother, who was trained as a human computer, David Alan Grier provides a poignant introduction to the wider world of women and men who did the hard computational labor of science. His grandmother’s casual remark, “I wish I’d used my calculus,” hinted at a career deferred and an education forgotten, a secret life unappreciated; like many highly educated women of her generation, she studied to become a human computer because nothing else would offer her a place in the scientific world.


The book begins with the return of Halley’s comet in 1758 and the effort of three French astronomers to compute its orbit. It ends four cycles later, with a UNIVAC electronic computer projecting the 1986 orbit. In between, Grier tells us about the surveyors of the French Revolution, describes the calculating machines of Charles Babbage, and guides the reader through the Great Depression to marvel at the giant computing room of the Works Progress Administration.

When Computers Were Human is the sad but lyrical story of workers who gladly did the hard labor of research calculation in the hope that they might be part of the scientific community. In the end, they were rewarded by a new electronic machine that took the place and the name of those who were, once, the computers.

David Alan Grier is Associate Professor in the Center for International Science and Technology Policy at George Washington University. His articles on the history of science have appeared in the American Mathematical Monthly, Chance, the Christian Science Monitor, and the Washington Post. He is Editor in Chief of the IEEE Annals of the History of Computing. Long before he learned that his grandmother had been trained as a human computer, he absorbed the methods of programming the electronic computer from his father, who was a scientific computing specialist for the Burroughs Corporation.

"David Alan Grier's recovery of the wonderfully rich story of human computers . . . ask[s] why human computers were made to disappear in the first place. . . . It is notoriously difficult to recover details of the lives of ordinary people. . . . But Grier triumphantly achieves his aim when discussing the twentieth-century human computer, as many are alive to tell their tales."—Jon Agar, Nature

"Prior to the advent of programmable data-processing electronic devices in the mid-20th century, the word computer was commonly used to describe a person hired to crank out stupefyingly tedious calculations. . . . Human computers have . . . been largely forgotten, and David Alan Grier . . . is intent on restoring them to their rightful place in history."—Ann Finkbeiner, Discover

"When Computers Were Human is a detailed and fascinating look at a world I had not even known existed."—James Fallows, National Correspondent, Atlantic Monthly

"The strength of this book is its breadth of research and its human touch. . . . [A] well written, informative and enjoyable work."—Amy Shell-Gellasch, MAA Reviews

"Overall, this book provides a wonderful survey of human computing from 1682 onward. . . . I recommend this book to all historians of computing, both professional and amateur."—Jonathan P. Bowen, IEEE Annals of the History of Computing

"When Computers Were Human is a detailed and fascinating look at a world I had not even known existed. After reading these accounts of ingenuity, determination, and true creative breakthrough, readers will look at today's computer-based society in an entirely different way."—James Fallows, National Correspondent, Atlantic Monthly

"How did the lives of people and the lives of numbers become so intimately entwined? David Alan Grier's authoritative, engaging, and richly detailed account of this neglected chapter in the history (and prehistory) of computing abounds with remarkable characters, sheds long-awaited light on their achievements, and could not have been better told."—George Dyson, author of Darwin among the Machines

"The story of computation before the invention of the computer is an important one—one that has not been told in this way before. This narrative grabs you right from the first page. Grier tells the human story behind some of the greatest scientific accomplishments, and tells it in a very readable way."—Michael R. Williams, Head Curator, Computer History Museum

"The history of the electronic computer has become the topic of a fair amount of scholarly work, and yet the wonderful story of the (collective) human computer has barely been noticed. This book will appeal both to an appreciable range of scholars and to more general readers. The style is pleasant and informal; the mathematics, accessible and interesting."—Theodore M. Porter, author of Trust in Numbers: The Pursuit of Objectivity in Science and Public Life