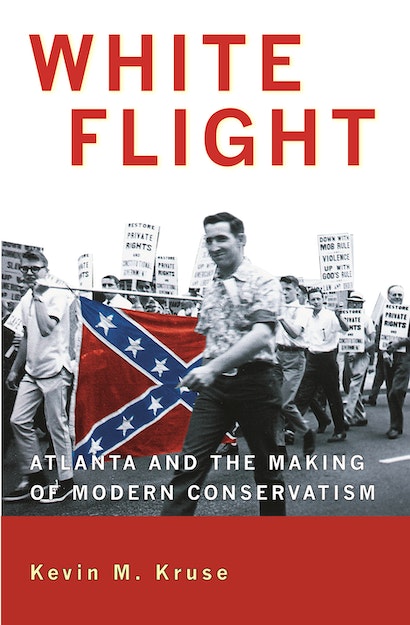 In this reappraisal of racial politics in modern America, Kevin Kruse explains the causes and consequences of “white flight” in Atlanta and elsewhere. Seeking to understand segregationists on their own terms, White Flight moves past simple stereotypes to explore the meaning of white resistance. In the end, Kruse finds that segregationist resistance, which failed to stop the civil rights movement, nevertheless managed to preserve the world of segregation and even perfect it in subtler and stronger forms.

Challenging the conventional wisdom that white flight meant nothing more than a literal movement of whites to the suburbs, this book argues that it represented a more important transformation in the political ideology of those involved. In a provocative revision of postwar American history, Kruse demonstrates that traditional elements of modern conservatism, such as hostility to the federal government and faith in free enterprise, underwent important transformations during the postwar struggle over segregation. Likewise, white resistance gave birth to several new conservative causes, like the tax revolt, tuition vouchers, and privatization of public services. Tracing the journey of southern conservatives from white supremacy to white suburbia, Kruse locates the origins of modern American politics.

Kevin M. Kruse is professor of history at Princeton University. He is the author of One Nation Under God: How Corporate America Invented Christian America and the coauthor of Fault Lines: A History of America since 1974.

"White Flight is a myth-shattering book. Focusing on the city that prided itself as 'too busy to hate,' Kevin Kruse reveals the everyday ways that middle-class whites in Atlanta resisted civil rights, withdrew from the public sphere, and in the process fashioned a new, grassroots, suburban-based conservatism. This important book has national implications for our thinking about the links between race, suburbanization, and the rise of the New Right."—Thomas J. Sugrue, author of The Origins of the Urban Crisis

"Kevin Kruse recasts our understanding of the conservative resistance to the civil rights movement. Shifting the spotlight from racial extremists to ordinary white urban dwellers, he shows that 'white flight' to the suburbs was among the most powerful social movements of our time. That movement not only reconfigured the urban landscape, it also transformed political ideology, laying the groundwork for the rise of the New Right and undermining the commitment of white Americans to the common good. No one can read this book and come away believing that the politics of suburbia are colorblind."—Jacquelyn Hall, University of North Carolina, Chapel Hill