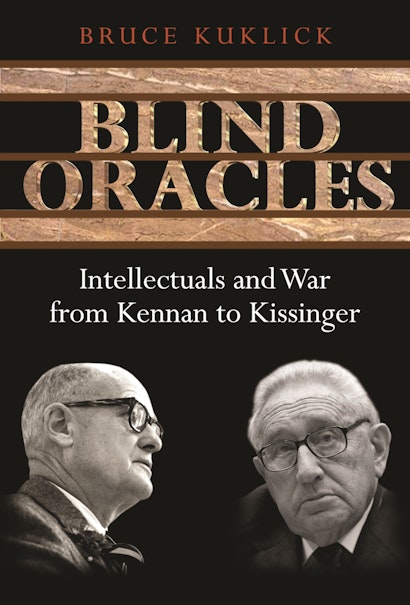 In this trenchant analysis, historian Bruce Kuklick examines the role of intellectuals in foreign policymaking. He recounts the history of the development of ideas about strategy and foreign policy during a critical period in American history: the era of the nuclear standoff between the United States and the Soviet Union.


The book looks at how the country’s foremost thinkers advanced their ideas during this time of United States expansionism, a period that culminated in the Vietnam War and détente with the Soviets. Beginning with George Kennan after World War II, and concluding with Henry Kissinger and the Vietnam War, Kuklick examines the role of both institutional policymakers such as those at The Rand Corporation and Harvard’s Kennedy School, and individual thinkers including Paul Nitze, McGeorge Bundy, and Walt Rostow.


Kuklick contends that the figures having the most influence on American strategy — Kissinger, for example — clearly understood the way politics and the exercise of power affects policymaking. Other brilliant thinkers, on the other hand, often played a minor role, providing, at best, a rationale for policies adopted for political reasons. At a time when the role of the neoconservatives’ influence over American foreign policy is a subject of intense debate, this book offers important insight into the function of intellectuals in foreign policymaking.

"Blind Oracles . . . brilliantly combines in concise yet penetrating fashion analysis and reflection on a range of intellectuals. . . . [I]t provides a fascinating study of the role of ideas and intellectuals, the methodological approaches and interpretive frameworks associated with realism, liberalism and so forth that are not only seen as abstract formulae but provide a demonstration of how these ideas are injected into policy and used by the policy-makers on the central issues of war from the origins of the Cold War, through Cuba and on to Vietnam."—David Ryan, International Affairs

"A provocative exploration of the connection between knowledge and politics that evaluates the role of intellectuals in formulating US foreign policy form 1945 to 1975, Kuklick divides his learned actors into three groups: scientifically oriented experts attached to the RAND Corporation; foreign policy academics, mostly social scientists who were associated with Richard Neustadt and Ernest May; and the university-based academics, such as McGeorge Bundy and Henry Kissinger. The value of Kuklick's analysis resides in the connections he makes between the individuals in each group; his assessment of their commitment to the theoretical principles he outlines; and his evaluation of the practical consequences of the intellectuals' approaches. . . . Kuklick concludes that the impact of ideas on policy was often minimal, unintentional, and less significant than political considerations."—Choice

"Bruce Kuklick has written an engaging and important study of the national security concepts of intellectuals and their influence on the policies of the United States during the period between the end of World War II and the Vietnam War. . . . Kuklick . . . demonstrates . . . an impressive capacity to relate ideas to politics and diplomacy."—Gary R. Hess, Register of the Kentucky Historical Society

"The thesis of the book can be simply stated. The foreign policy intellectuals who applied academic expertise to Cold War issues were mostly misguided. . . . This volume is likely to provoke an interesting debate about the role of academics and social science theories in contemporary American foreign policy. In that debate, it will not be hard to know where Kuklick stands."—Robert A. Strong, Journal of American History

"Kuklick's is . . . an informative and persuasive account of a significant subject matter, argued with skill and eruditeness. In recounting the origins and evolutions of intellectual and strategic thought, Kuklick offers a powerful deconstruction of the individuals and organizations of the epoch."—Kaeten Mistry, 49th Parallel

"Creative, ambitious, and stimulating, Blind Oracles is conceived as something more than just a straight history of ideas about international affairs. It explores not just the content of these thinkers' ideas but how the ideas played out when put into practice. . . . [A] distinctive addition to the literature on Cold War thought."—David Greenberg, Political Science Quarterly

"[T]his brief but rich study offers more insights per page than just about any other work on the Cold War of which this reader knows."—Frank Ninkovich, The Historian

"Fabulous material. The book makes a significant contribution to our understanding of the era."—Lisa Anderson, Columbia University