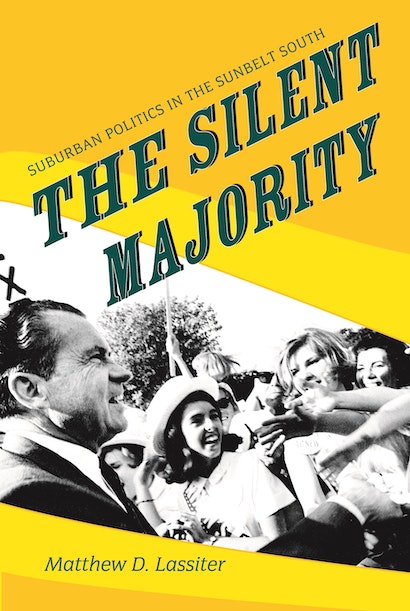 Suburban sprawl transformed the political culture of the American South as much as the civil rights movement did during the second half of the twentieth century. The Silent Majority provides the first regionwide account of the suburbanization of the South from the perspective of corporate leaders, political activists, and especially of the ordinary families who lived in booming Sunbelt metropolises such as Atlanta, Charlotte, and Richmond.


Matthew Lassiter examines crucial battles over racial integration, court-ordered busing, and housing segregation to explain how the South moved from the era of Jim Crow fully into the mainstream of national currents. During the 1960s and 1970s, the grassroots mobilization of the suburban homeowners and school parents who embraced Richard Nixon’s label of the Silent Majority reshaped southern and national politics and helped to set in motion the center-right shift that has dominated the United States ever since.

The Silent Majority traces the emergence of a “color-blind” ideology in the white middle-class suburbs that defended residential segregation and neighborhood schools as the natural outcomes of market forces and individual meritocracy rather than the unconstitutional products of discriminatory public policies. Connecting local and national stories, and reintegrating southern and American history, The Silent Majority is critical reading for those interested in urban and suburban studies, political and social history, the civil rights movement, public policy, and the intersection of race and class in modern America.

Matthew D. Lassiter, Assistant Professor of History at the University of Michigan, is coeditor of The Moderates' Dilemma: Massive Resistance to School Desegregation in Virginia.

"This is a powerful book on a powerful subject. It should have a lasting impact on the way historians think about modern southern politics, urbanization, civil rights, and race relations."—Raymond A. Mohl, Journal of American History

"Matthew Lassiter persuasively argues in The Silent Majority that the Republicans gained in the South not because of regional racism but because of the meteoric growth of the Sun Belt suburbs, which created a new class of middle-income, socially moderate and fiscally conservative voters."—Clay Risen, Atlanta Journal-Constitution

"Matthew D. Lassiter argues convincingly that academics and pundits alike are wrong to point to a top-down 'southern strategy' to explain why the South transformed from a Democratic Party into a Republican stronghold. The book presents a fresh way of thinking about not only late-twentieth-century American political history but also the impact of the postwar civil rights movement."—Damon Freeman, Journal of Southern History

"In this engaging and important book, Matthew Lassiter recasts the history of the postwar sunbelt South. By focusing on the complex interactions of race, class, consumerism, and the politics of metropolitan space, he supplants the familiar 'southern strategy' interpretation with one of a 'suburban strategy' driven by color-blind arguments, individualism, and free-market consumerism at the grassroots. . . . At a time when once solidly Republican enclaves . . . are becoming more diverse and susceptible to incursion by Democrats, Lassiter's fine book offers provocative ways to examine the role of race, class, consumerism, and metropolitan space in our local and national politics."—Craig A. Kaplowitz, H-Net Reviews

"Lassiter makes a major contribution . . . by examining the importance of the suburb. . . . Lassiter offers first-rate, path-breaking scholarship that covers new ground and raises key questions. This book is quite well suited for graduate courses in urban studies."—Timothy K. Kinsella, Historian

"Matt Lassiter offers a major reinterpretation of the transformation of liberalism and the rise of conservatism in the post-1960s South and in America writ large. He shows how white Southerners, like their Northern counterparts, embraced a rhetoric of color-blindness that gave them cover to build a sprawling, suburban world that reinforced racial inequalities. This provocative, pathbreaking book offers a whole new conceptual map for the reappraisal of Southern history and national political history."—Thomas J. Sugrue, University of Pennsylvania and author of The Origins of the Urban Crisis

"Impressively researched, The Silent Majority brings together valuable and wholly new collections of archival material. Many historians pay lip service to the need to draw connections between the grassroots and the leadership, the local scene and national affairs. Lassiter actually does it. With verve and grace, he presents compelling accounts of grassroots mobilizations in Virginia, South Carolina, and Tennessee, and sensitive, detailed case studies of Atlanta and Charlotte. At the same time, he demonstrates how these local, suburban movements both reshaped national politics."—Bruce Schulman, Boston University

The Silent Majority stands as a landmark in a new generation of scholarship on the American South. Matthew Lassiter is spot on in his dissection of the myths of de facto segregation, national innocence, and southern distinctiveness. Rejecting a narrative that revolves around individual racism, he shows us how we arrived at our current dilemmas. This book is indispensable reading for anyone seeking to understand how the North and the South have converged around an 'intractable landscape of racial apartheid' in which class ideologies and divisions play a central role."—Jacquelyn Hall, University of North Carolina, Chapel Hill and Director, Southern Oral History Program.

"The Silent Majority is a compelling recounting of modern liberalism's demise and the ascendance of center-right politics. It is based not on Nixonian Southern strategies and stubborn remnants of malign racist thought and deeds, but on the adoption of socially acceptable race-neutral resistance to racial equality, financed by federal initiatives which created white suburbs and encouraged majority black urban cores. This is a breakthough rethinking of established thought, discarding conventional wisdom."—Julian Bond, Chairman of NAACP

"Matthew Lassiter has mastered an impressive body of primary and secondary sources ranging widely over national, regional and local materials over the past fifty years. He uses this mountain of evidence to make a telling point about the emergence of suburban southerners as a primary political force in the region, and about their impact on school desegregation."—David R. Goldfield, University of North Carolina, Charlotte