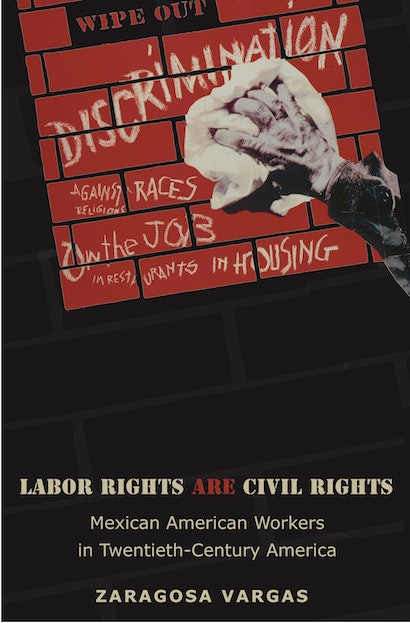 In 1937, Mexican workers were among the strikers and supporters beaten, arrested, and murdered by Chicago policemen in the now infamous Republic Steel Mill Strike. Using this event as a springboard, Zaragosa Vargas embarks on the first full-scale history of the Mexican-American labor movement in twentieth-century America. Absorbing and meticulously researched, Labor Rights Are Civil Rightspaints a multifaceted portrait of the complexities and contours of the Mexican American struggle for equality from the 1930s to the postwar era.


Drawing on extensive archival research, Vargas focuses on the large Mexican American communities in Texas, Colorado, and California. As he explains, the Great Depression heightened the struggles of Spanish speaking blue-collar workers, and employers began to define citizenship to exclude Mexicans from political rights and erect barriers to resistance. Mexican Americans faced hostility and repatriation.


The mounting strife resulted in strikes by Mexican fruit and vegetable farmers. This collective action, combined with involvement in the Communist party, led Mexican workers to unionize. Vargas carefully illustrates how union mobilization in agriculture, tobacco, garment, and other industries became an important vehicle for achieving Mexican American labor and civil rights.


He details how interracial unionism proved successful in cross-border alliances, in fighting discriminatory hiring practices, in building local unions, in mobilizing against fascism and in fighting brutal racism. No longer willing to accept their inferior status, a rising Mexican American grassroots movement would utilize direct action to achieve equality.

Zaragosa Vargas is Professor of History at the University of California, Santa Barbara. He is the author of Proletarians of the North: A History of Mexican Industrial Workers in Detroit and the Midwest, 1917-1933.

"Important books are provocative—they teach us new things, open new conversations, and point the way to new research. Labor Rights Are Civil Rights does all of this."—Roberto R. Treviño, Reviews in American History

"Vargas does much to chronicle the role of Mexican American workers in the turbulent decades of the 1930s and 1940s and to document their important role in the labor struggles and political controversies of those years."—Robert H. Zieger, Labor History

"Vargas has produced a synthesis of Mexican American labor history worthy of the attention of every labor, Chicano, and civil rights historian."—Matt Garcia, Western Historical Quarterly

"Vargas's analysis is at once informative and illuminating."—Clete Daniel, Business History Review

"Professor Zaragosa Vargas has penned an extraordinary book. Labor Rights Are Civil Rights not only demonstrates the long-standing integration of workers' rights and civil rights but also provides a provocative, comprehensive sweep of Mexican-American labor history. I highly recommend it."—Vicki L. Ruiz, author of From Out of the Shadows: Mexican Women in 20th Century America

"Zaragosa Vargas has provided us with an insightful and revealing study of the crucial role of Mexican and Mexican American workers in struggles for union rights and civil rights in Southwestern agriculture and industry during the 1930s and 1940s. Drawing on his extensive original research he has effectively situated those struggles in the context of both national and international political changes, producing a book that should be required reading for anyone interested in the history of these decades."—David Montgomery, author of Citizen Worker: The Experience of Workers in the United States with Democracy and the Free Market during the Nineteenth Century

"Labor Rights Are Civil Rights is a brilliant and much-needed contribution. Vargas not only compels us to re-think 20th century American working-class and civil rights history, but he tells a powerful transnational story, reminding us that so-called U.S. history doesn't stop at the Rio Grande."—Robin D. G. Kelley, author of Freedom Dreams: The Black Radical Imagination

Zaragosa Vargas stunningly chronicles the vast oppression and previously hidden history of Mexican American workers, especially women. His hard-hitting, comprehensive narrative shows how their battles for labor rights, like those of African American workers, simultaneously became struggles for freedom. This is a major work exposing the radical and working-class roots of the civil rights movements of the twentieth century."—Michael Honey, author of Black Workers Remember, An Oral History, and Southern Labor and Black Civil Rights.

"Impressively grounded in primary sources and bolstered by a sharp analysis of the best of the secondary literature, the book is simultaneously a powerful piece of synthesis and a strong and original new interpretation."—David Gutierrez, University of California, San Diego