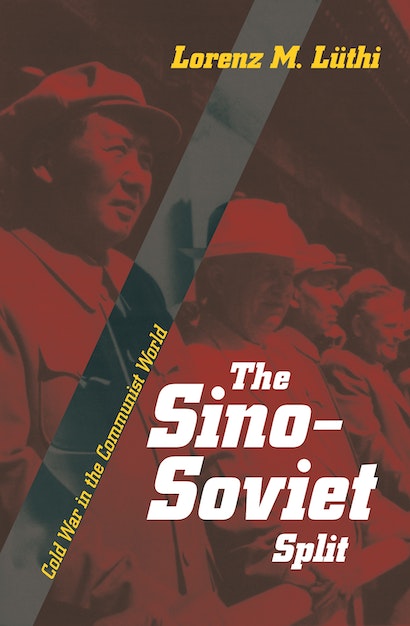 A decade after the Soviet Union and the People’s Republic of China established their formidable alliance in 1950, escalating public disagreements between them broke the international communist movement apart. In The Sino-Soviet Split, Lorenz Lüthi tells the story of this rupture, which became one of the defining events of the Cold War. Identifying the primary role of disputes over Marxist-Leninist ideology, Lüthi traces their devastating impact in sowing conflict between the two nations in the areas of economic development, party relations, and foreign policy. The source of this estrangement was Mao Zedong’s ideological radicalization at a time when Soviet leaders, mainly Nikita Khrushchev, became committed to more pragmatic domestic and foreign policies.


Using a wide array of archival and documentary sources from three continents, Lüthi presents a richly detailed account of Sino-Soviet political relations in the 1950s and 1960s. He explores how Sino-Soviet relations were linked to Chinese domestic politics and to Mao’s struggles with internal political rivals. Furthermore, Lüthi argues, the Sino-Soviet split had far-reaching consequences for the socialist camp and its connections to the nonaligned movement, the global Cold War, and the Vietnam War.

The Sino-Soviet Split provides a meticulous and cogent analysis of a major political fallout between two global powers, opening new areas of research for anyone interested in the history of international relations in the socialist world.

Lorenz M. Lüthi is assistant professor of the history of international relations at McGill University.

"An astonishingly well-documented, densely detailed history of the causes and development of the Sino-Soviet conflict from virtually every relevant perspective. . . . The Sino-Soviet Split is a major achievement in Cold War history and the standard against which future scholarship on this subject likely will be judged for many years to come."—Charles K. Armstrong, The Moscow Times

"[The Sino-Soviet Split] is well-researched and compellingly-argued, and helps illuminate a critical portion of the Cold War."—R.M. Farley, Choice

"This is a solid study of the breakup of the Sino-Soviet alliance. . . . Of all the available English-language works on this topic, this study stands out as the most extensive as well as balanced in using both Russian and Chinese materials. . . . [T]his book is a welcome addition, not only to the Cold War international history literature, but also to the studies on contemporary alliance politics. Methodologically, too, it stands as a wonderful example of how effectively a multiarchival and multilinguistic approach can and should be used in Cold War studies."—Shu Guang Zhang, Slavic Review

"Lorenz M. Lüthi's well-informed book supersedes the others in its thoroughness in covering the critical events and drawing on archival evidence and memoirs that were unavailable until recently. It nicely balances treatment of both countries, carefully follows changing emphases as the split widened from 1956 to 1966, and keeps the focus on identifying the causes."—Gilbert Rozman, International History Review

"Lüthi offers new insight into numerous foreign policy relationships central to the Cold War, while also directing our attention to a series of still unexplored issues pertinent to the vast socialist bloc and the fascinating alliance between the Russians and the Chinese."—Austin Jersild, American Historical Review

"The Sino-Soviet Split is an excellent study of how China's domestic politics (and particularly Mao's efforts to remain at the helm of China's political and socioeconomic development) informed its foreign policy in general and relations with the Soviet Union in particular. Seen in the context of China's domestic-foreign policy nexus, Lüthi's monograph will be of great value to scholars who are interested in China's Cold War diplomacy and, more generally, an analysis of Chinese foreign policymaking."—Czeslaw Tubilewicz, Russian Review

"It is clearly the work of an industrious and skilled researcher in control of his material. The Sino-Soviet Split is a valuable work that provides a bounty of raw material and research leads for others who seek to understand the course of the Sino-Soviet split."—Steven M. Goldstein, China Quarterly

"This persuasive, thorough, and balanced history of the breakdown of Sino-Soviet relations in the late 1950s and 1960s should be considered essential reading for scholars interested in the Cold War."—Peter C. Pozefsky, Historian

"Buttressed by massive documentation from a dazzling array of international archival sources, Lorenz Lüthi examines all the issues involved in the Sino-Soviet conflict from 1956 to 1966, and he singles out ideology as the prime motive that drove these two communist giants into catastrophic division. The episodes covered in this major work unfold like a kaleidoscope, refining or correcting traditional interpretations of events during this important period. There is no doubt that this book has established itself as the yardstick by which other works will be measured."—Toshi Hasegawa, University of California, Santa Barbara

"A prodigiously researched and level-headed study of the political and diplomatic split between the Soviet and Chinese communist governments. The need to understand Chinese and Russian foreign policy both past and present remains high, and the wealth of information in this important book will be a key point of reference for students and scholars in the decades to come."—O. A. Westad, London School of Economics and Political Science

"Lorenz Lüthi has made good use of a vast quantity of declassified documents and memoirs from the former Soviet bloc, China, and Western countries and has also drawn extensively on the secondary literature. His fascinating book will be a crucial resource for all those interested in tracing how and why the USSR and China moved from alliance to bitter confrontation."—Mark Kramer, Harvard University