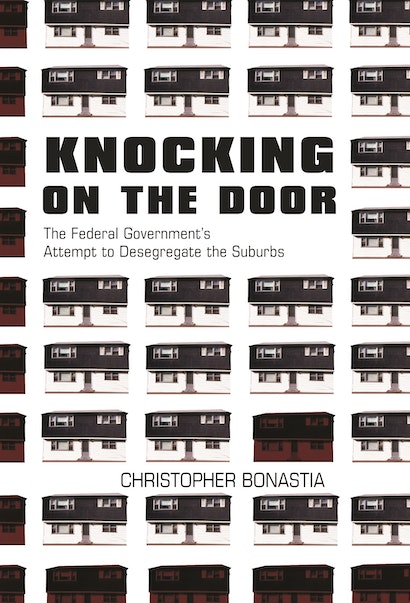 Knocking on the Door is the first book-length work to analyze federal involvement in residential segregation from Reconstruction to the present. Providing a particularly detailed analysis of the period 1968 to 1973, the book examines how the U.S. Department of Housing and Urban Development (HUD) attempted to forge elementary changes in segregated residential patterns by opening up the suburbs to groups historically excluded for racial or economic reasons. The door did not shut completely on this possibility until President Richard Nixon took the drastic step of freezing all federal housing funds in January 1973. Knocking on the Door assesses this near-miss in political history, exploring how HUD came surprisingly close to implementing rigorous antidiscrimination policies, and why the agency’s efforts were derailed by Nixon.


Christopher Bonastia shows how the Nixon years were ripe for federal action to foster residential desegregation. The period was marked by new legislative protections against housing discrimination, unprecedented federal involvement in housing construction, and frequent judicial backing for the actions of civil rights agencies.


By comparing housing desegregation policies to civil rights enforcement in employment and education, Bonastia offers an unrivaled account of why civil rights policies diverge so sharply in their ambition and effectiveness.

Christopher Bonastia is assistant professor in the Department of Sociology at Lehman College, City University of New York, and a former Robert Wood Johnson Scholar in Health Policy at the University of
California, Berkeley

"Why have federal efforts at housing desegregation been less successful than struggles against school and job discrimination? In a thoughtful comparison of the responsible federal agencies, Bonastia contends that the 'institutional home' in which a desegregation task was placed is crucial. . . . [Knocking on the Door] clearly lays out choices and the consequences of desegregation efforts. Highly recommended."—S. D. Borchert, Choice

"I found this book to be useful and informative. . . . [It demonstrates] why a results-oriented approach to civil-rights enforcement was not undertaken in housing, as it was, for a time, in education and employment. . . . Bonastia makes a convincing argument that, with a different type of enforcement agency combating housing discrimination, progress could have been greater than it was."—John E. Farley, Contexts

"This book provides a fascinating look at the details and nuances of public policy history during the Civil Rights era and deepens our understanding of the consequences of institutional arrangements for the effectiveness of social policy. The book is thus relevant to scholars of social change, institutions, and racial stratification. . . . This work offers valuable insight into the federal role in perpetuating segregation and the institutional forces limiting social change."—Chenoa Flippen, American Journal of Sociology