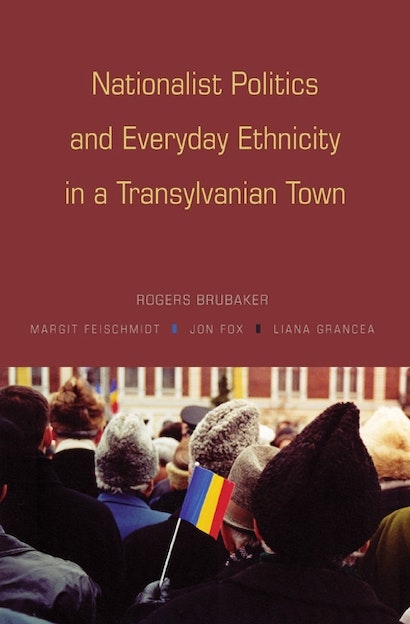 Situated on the geographic margins of two nations, yet imagined as central to each, Transylvania has long been a site of nationalist struggles. Since the fall of communism, these struggles have been particularly intense in Cluj, Transylvania’s cultural and political center. Yet heated nationalist rhetoric has evoked only muted popular response. The citizens of Cluj — the Romanian-speaking majority and the Hungarian-speaking minority — have been largely indifferent to the nationalist claims made in their names.


Based on seven years of field research, this book examines not only the sharply polarized fields of nationalist politics — in Cluj, Transylvania, and the wider region — but also the more fluid terrain on which ethnicity and nationhood are experienced, enacted, and understood in everyday life. In doing so the book addresses fundamental questions about ethnicity: where it is, when it matters, and how it works. Bridging conventional divisions of academic labor, Rogers Brubaker and his collaborators employ perspectives seldom found together: historical and ethnographic, institutional and interactional, political and experiential. Further developing the argument of Brubaker’s groundbreaking Ethnicity without Groups, the book demonstrates that it is ultimately in and through everyday experience — as much as in political contestation or cultural articulation — that ethnicity and nationhood are produced and reproduced as basic categories of social and political life.

"By drilling deep into the mundane conversations, cares, and relationships among citizens of Cluj-Napoca...[the authors] set out to examine precisely how ethnicity matters....[An] important and conceptually innovative book."—Robert Levgold, Foreign Affairs

"Provides a reality check for those who continue to operate under the myths of the past, while offering valuable insights into the mundane inner workings of everyday ethnicity in the old borderlands of the Russian, Turkish, and Austro-Hungarian empires....The most important contribution of the book is its ability to demystify nationhood in East Central Europe."—Robert A. Saunders, Transitions

"This fascinating, richly detailed, and highly informative study of Cluj in the mixed Hungarian-Romanian Transylvanian part of Romania is based on fieldwork conducted between 1995 and 2001...This is a must read for anyone interested in ethnic or national identity in eastern Europe or, indeed, in any area contested by groups using ethnic or nationalist symbols to announce their presence and promote their interests."—D. Ashley, Choice

"This substantial volume, with its vivid portrayal of the shifting dimensions of ethnicity in Romanian-Transylvanian city of Cluj-Napoca... is a welcome addition both to theory challenging romantic, essentialist identity models as well as to our knowledge of the inner workings of central European life.... Given its strong arguments and impressive array of data about the resourceful, performative, everyday qualities of ethnicity, this book deserves a wide readership."—David A. Kideckel, Slavic Review

"We can only rejoice that through the writing of this book Rogers Brubaker reads anew the theories of nationalism to which he has contributed in the past with the aid of convincing field arguments."—Monica Heintz, Journal of the Royal Anthropological Society

"Brubaker et al. have written a splendid and highly recommendable book, adding substantial new insights to innumerable other works on ethnicity. Their method of combining observations with theory and discussing the significance of ethnicity in a wide range of situations in everyday life proves illuminating, not only to and understanding of ethnicity in Cluj, but also in providing insight and a framework for approaching numerous other cases as well."—Jorgen Kuhl, Political Studies Review

"The authors of this pathbreaking book will have done the historiography of the region a tremendous service if historians, as they should, take up the challenge it poses them."—Mark Pittaway, Journal of Modern History

"Rogers Brubaker and his collaborators have succeeded in writing a readable, informative, and provocative book. . . . Valuable in a number of ways: first in its direct, readable, and clear style, which is remarkable given so many co-authors; second in its artful way of using technical terms and concepts from socio-linguistics to make sense of complex interpersonal interactions; and third in its organization, which makes the book useful for both introductory and advanced courses in history, sociology, and anthropology."—Thomas C. Wolfe, Austrian History Yearbook

"National Politics and Everyday Ethnicity in a Transylvanian Town has the potential to prompt a fundamental shift in how we both conceptualize and study ethnicity. In the light of its contributions, researchers interested in ethnicity would do well to examine the interstices of social life as well as its formal institutions, and to ask questions that privilege local meanings, rather than reifying narratives that are themselves me tools of ethnic mobilization."—Jessica Allina-Pisano, Perspectives on Politics

"Nationalist Politics and Everyday Ethnicity was an excellent read. . . . I have added this book to my students' reading list, and heartily recommend it to anyone who has an interest in any of the themes Brubaker and his colleagues set out to address."—Teresa Staniewicz, American Journal of Sociology

"A remarkable work of scholarship and of fieldwork, Nationalist Politics and Everyday Ethnicity in a Transylvanian Town should be read by every social scientist interested in nationalism, or ethnicity, or community life, or Eastern Europe. It does a terrific job of showing how large-scale social changes and projects of identity play out in a local context. Along the way it raises important questions for both social theory and public affairs. It should shape discussion for years to come."—Craig Calhoun, Social Science Research Council

"For over a decade, Rogers Brubaker has been calling into question the entire edifice underpinning the study of ethnicity by challenging the idea that ethnicity is about real groups founded on 'Ethnic identities.' This superb book on Hungarians and Romanians in a Transylvanian town amply demonstrates the fruitfulness of his conception. Not only will this be the definitive statement on contemporary ethno-national relations in this very complex region in Europe: it will become a classic for the analysis of such relations in many other parts of the world."—Katherine Verdery, Graduate Center, City University of New York

"Here in this uncommonly sensitive study, Rogers Brubaker employs perspectives and analytical idioms rarely coupled in the study of ethnicity and nationhood as applied to a distinct geographical area. We are taken to Cluj, a city in western Romania scarcely known to the West but one whose profile fairly shimmers on the page with tensions accruing from a combined and culturally rich Hungarian-Romanian past. The author probes the symbolic and ritualistic aspects of daily life in the surrounding area, leading to groundbreaking views on ethnicity."—István Deák, Columbia University

"This wonderful book will be welcomed by students and scholars of ethnicity, because there are so few, if any, other studies that look closely at how decisions about one's ethnicity and nationality are actually made. The first half provides an excellent review of Cluj's and Transylvania's history, and the detailed examination of life in Cluj that makes up the second half represents a unique contribution to our understanding of how ethnicity really functions in a contested space."—Daniel Chirot, University of Washington, author of Modern Tyrants

"A fine book that will be widely read and influential. Not only does it serve as an empirical companion piece to the more theoretical essays in Rogers Brubaker's Ethnicity without Groups, it also breaks new methodological ground while presenting a clear and subtle analysis of complex, little researched, but important social patterns associated with that trademark of modern times, the 'nation' or ethnic group."—Jeremy King, Mount Holyoke College, author of Budweisers into Czechs and Germans