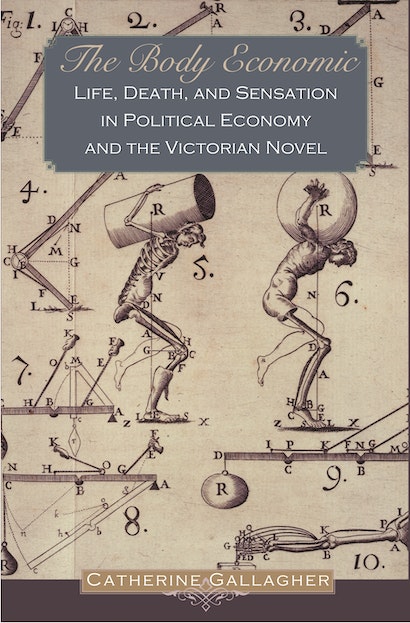 The Body Economic revises the intellectual history of nineteenth-century Britain by demonstrating that political economists and the writers who often presented themselves as their literary antagonists actually held most of their basic social assumptions in common. Catherine Gallagher demonstrates that political economists and their Romantic and early-Victorian critics jointly relocated the idea of value from the realm of transcendent spirituality to that of organic “life,” making human sensations — especially pleasure and pain — the sources and signs of that value. Classical political economy, this book shows, was not a mechanical ideology but a form of nineteenth-century organicism, which put the body and its feelings at the center of its theories, and neoclassical economics built itself even more self-consciously on physiological premises.

The Body Economic explains how these shared views of life, death, and sensation helped shape and were modified by the two most important Victorian novelists: Charles Dickens and George Eliot. It reveals how political economists interacted crucially with the life sciences of the nineteenth century — especially with psychophysiology and anthropology — producing the intellectual world that nurtured not only George Eliot’s realism but also turn-of-the-century literary modernism.

Catherine Gallagher is Eggers Professor of English Literature at the University of California, Berkeley. Her books include The Industrial Reformation of English Fiction, Nobody's Story, The Vanishing Acts of Women Writers in the Marketplace, and Practicing New Historicism (with Stephen Greenblatt).

"[An] astute and innovative reevaluation of the interplay between fiction and economic thought . . . [The Body Economic] represents a major contribution to literary studies and intellectual history."—Margot Finn, Journal of Victorian Culture

"In a stunningly innovative gesture, Gallagher points out that the thin-blooded political economists and the warm-hearted Romantic organicists of early nineteenth-century Britain had a good deal more in common than is generally supposed."—Terry Eagleton, Field Day Review

"Gallagher's brilliance as an intellectual historian has always resided in her ability to show us how ideas that look different are really alike, and how ideas we tend to lump together are really different. . . . The Body Economic . . . is a gift to the intelligence of every student of nineteenth-century culture."—Rosemarie Bodenheimer, Nineteenth-Century Literature

"[B]rings the history of economics into the heart of modern literature and literary theory, showing how much modernism's anti-bourgeois presentation of sex owed to a complex century-long debate about wealth and poverty. It is a rare achievement."—Gordon Bigelow, Modernism/modernity

"Many of Gallagher's local observations and textual analyses are stunningly perceptive and original. . . . Gallagher's treatments of the four novels she examines in detail are also complex and rewarding. Her analysis of Daniel Deronda, which turns on the resemblance between Jevon's marginal utility formula and Eliot's exploration of Gwendolen's and Elit's storries about being redundant—'a final increment' that can never be as desirable as its predecessors—is a tour de force that illuminates the novel in fascinating ways."—Victorian Studies

"With admirable economy and a clear sense of purpose, The Body Economic explores and collapses the gulf popularly held to exist between the values and mindsets of post-Enlightenment political economists, represented here by Bentham and Malthus, and those of nineteenth-century imaginative novelists, here represented in the mid-Victorian phase by Dickens, and in the late, by George Eliot. . . . [An] original and considerable accomplishment."—Dickens Quarterly

"In her commanding and authoritative new study Catherine Gallagher['s] . . . The Body Economic will doubtless become required reading for anyone seeking to understand the complex lines of affiliation and resistance between economic theory and the literary text in the mid-Victorian period."—Roger Ebbatson, Modern Language Review

"[This] is an innovative and provocative book, brimming with fresh insights. . . . Gallagher's use of political economy to explain the most puzzling features of Dickens's novel is inspirational, and it will likely become a model for future studies."—Silvana Colella, Nineteenth Century Studies

"A marvelous book. No other literary critic writes with such an assured and lucid grasp of both the novel and the history of economic theory."—James Eli Adams, Cornell University

"This is a stunning and extremely important book whose scholarship is deep and sound from start to finish. Gallagher offers a fundamentally original and revisionary understanding of Victorian culture and of modernist literature as well."—George Levine, Rutgers University