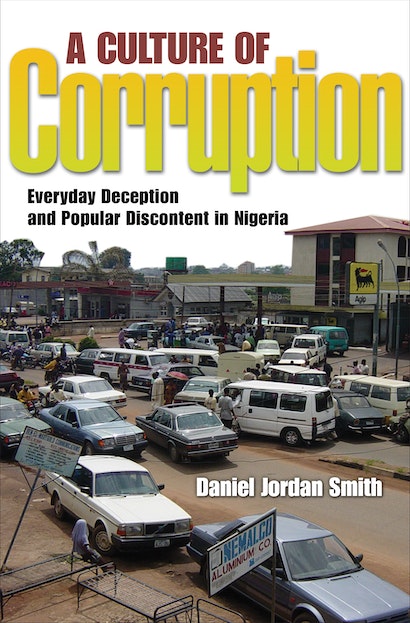 E-mails proposing an “urgent business relationship” help make fraud Nigeria’s largest source of foreign revenue after oil. But scams are also a central part of Nigeria’s domestic cultural landscape. Corruption is so widespread in Nigeria that its citizens call it simply “the Nigerian factor.” Willing or unwilling participants in corruption at every turn, Nigerians are deeply ambivalent about it — resigning themselves to it, justifying it, or complaining about it. They are painfully aware of the damage corruption does to their country and see themselves as their own worst enemies, but they have been unable to stop it. A Culture of Corruption is a profound and sympathetic attempt to understand the dilemmas average Nigerians face every day as they try to get ahead — or just survive — in a society riddled with corruption.


Drawing on firsthand experience, Daniel Jordan Smith paints a vivid portrait of Nigerian corruption — of nationwide fuel shortages in Africa’s oil-producing giant, Internet cafés where the young launch their e-mail scams, checkpoints where drivers must bribe police, bogus organizations that siphon development aid, and houses painted with the fraud-preventive words “not for sale.” This is a country where “419” — the number of an antifraud statute — has become an inescapable part of the culture, and so universal as a metaphor for deception that even a betrayed lover can say, “He played me 419.” It is impossible to comprehend Nigeria today — from vigilantism and resurgent ethnic nationalism to rising Pentecostalism and accusations of witchcraft and cannibalism — without understanding the role played by corruption and popular reactions to it.

Daniel Jordan Smith is associate professor of anthropology at Brown University. He has worked in Nigeria since the late 1980s, first as a public health adviser with a nongovernmental organization and later as an anthropologist.

"The heart of the book concerns how Nigerians cope daily with the need to 'settle' with those who hold power, but are also experiencing a breakdown of the system that at least allowed for survival."—Nina C. Ayoub, Chronicle of Higher Education

"Smith has written a sharply critical, yet finely judged, book that every student of African politics should pay heed to."—Ebenezer Obadare, International Affairs

"[Smith's] primary concern is with the perception of corruption amongst Nigerians and the impact this perception has on the behavior of Nigerians. Anyone who is concerned with the discussion of corruption and how it relates to the development of African economies should read Smith's book. The notion that corruption causes poverty is accepted by Western development banks and their critics alike. Smith demonstrates better than any opponent of this idea could that this assumption is rooted in the perception of African's behavior rather than in an analysis of the economic of development."—Stuart Simpson, Culture Wars

"Smith examines e-mail schemes as cultural texts, analyzing their structure and what they say about the culture of corruption in Nigeria."—Susan Cotts Watkins, Population and Development Review

"Corruption may be found everywhere. However, its particular pervasiveness in Nigeria is sometimes referred to as 'the Nigerian factor' by Nigerians themselves. Anthropologist Smith examines this corruption from the perspective of ordinary Nigerians in their everyday lives...This clearly written volume is for anyone interested in a deeper understanding of the dynamics of corruption in contemporary Nigeria."—E.P. Renne, Choice

"This is a very good book that is relevant far beyond Nigeria. . . . Daniel Jordan Smith has written a book that enlightens and entertains: a great achievement."—Jan Kees Van Donge, Modern African Studies

"A Culture of Corruption is a well-written book . . . and gives us a lively and accurate picture of a phenomenon that is particularly associated with Nigeria today. It is an extremely sympathetic portrait, seen from the inside, of popular reaction to a factor that is distorting the lives of Nigerians and postponing the development of their own form of real democracy."—Jennifer Greenleaves, Sociologica

"The importance of Smith's study . . . not only lies in the sincerity with which he often writes as a direct participant in the instances he lays bare, but also in his tracking of the dynamics of victimhood, dununciation, and connivance in them."—Nikolai Jeffs, Anthropological Notebooks

"By all measurements Nigeria, richly endowed with natural and human resources and the United States' fifth largest source of imported oil, should be one of the most prosperous of the world's developing countries. Instead it is one of the poorest. No one has done a better job than Daniel Jordan Smith of showing how and why the cancer of corruption has hobbled the giant of Africa. A Culture of Corruption is an absorbing cultural study by an anthropologist who deeply cares about the society into which he has married."—Walter Carrington, former U.S. Ambassador to Nigeria

"This is a path-breaking study of a challenging topic for African studies, anthropology, development economics, and social sciences in general. If any country in Africa should be able to join the world's newly industrialized countries, it should be Nigeria in view of its size and its oil wealth. The common explanation of its constant failure to do so is corruption. The great merit of this book is to show that corruption has many faces in everyday life. The term is all too often used as a blanket notion. Smith shows how misleading this is by studying it as a daily reality with manifold expressions. The book fills an urgent need. We must better understand the reasons why Africa's giant is stagnating if we want to be able to say something about the continent's present-day crisis."—Peter Geschiere, University of Amsterdam

"Nigeria is known globally as a center for scams of a variety and audacity that are astounding to those who trust that their own societies and economies run according to 'the rules.' In A Culture of Corruption, Daniel Jordan Smith draws on many years of living in Nigeria as an NGO representative and anthropologist to cast a very wide net around Nigerian corruption, to include contemporary official and unofficial malfeasance of all kinds. His exposition is graphic, detailed, and broadly supported. He doesn't flinch before quite terrifying case material. There is no other work that covers the same ground so clearly and in such a nuanced and observant manner."—Jane I. Guyer, Johns Hopkins University