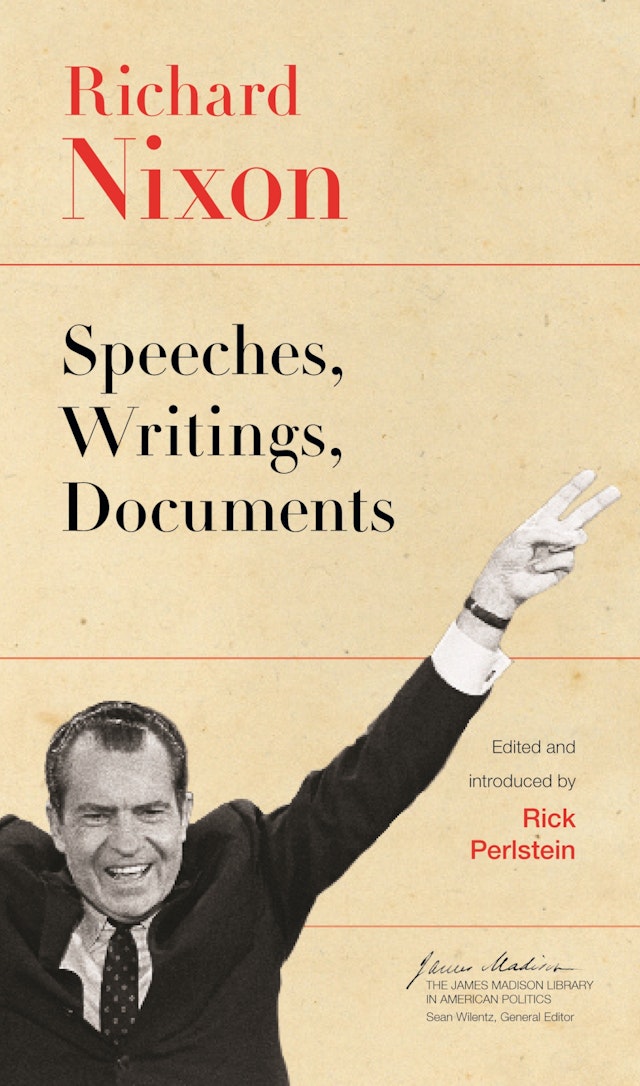 The first book to present America’s most controversial president in his own words across his entire career, this unique collection of Richard Nixon’s most important writings dramatically demonstrates why he has had such a profound impact on American life. This volume gathers everything from schoolboy letters to geostrategic manifestos and Oval Office transcripts to create a fascinating portrait of Nixon, one that is enriched by an extensive introduction in which Rick Perlstein puts forward a major reinterpretation of the thirty-seventh president’s rise and fall.


This anthology includes some of the most famous addresses in American history, from Nixon’s “Checkers” speech (1952) and “Last Press Conference” (1962), to the “Silent Majority” speech (1969) and White House farewell. These texts are joined by campaign documents — including the infamous “Pink Sheet” from the 1950 Senate race — that give stark evidence of Nixon’s slashing political style. Made easily available here for the first time, these writings give new depth to our understanding of Nixon.

Rick Perlstein is the author of Nixonland: The Rise of a President and the Fracturing of America (Scribner) and Before the Storm: Barry Goldwater and the Unmaking of the American Consensus (Hill & Wang), which won the Los Angeles Times book prize. He has written for many publications, including the New York Times and the Washington Post.

"This selection of Nixon documents is excellent, as is Rick Perlstein's introduction. It gets Nixon right, and it identifies the defining themes of his life and career."—David Greenberg, Rutgers University, author of Nixon's Shadow: The History of an Image

"Rick Perlstein's Nixon anthology is extremely impressive. Given that Nixon wrote or heavily edited most of his speeches, this collection of representative statements not only sheds much light on Nixon's long public life but it also reveals much about his multifaceted personality. And Perlstein's introduction and notes are insightful and balanced."—Timothy Naftali, author of Blind Spot: The Secret History of American Counterterrorism