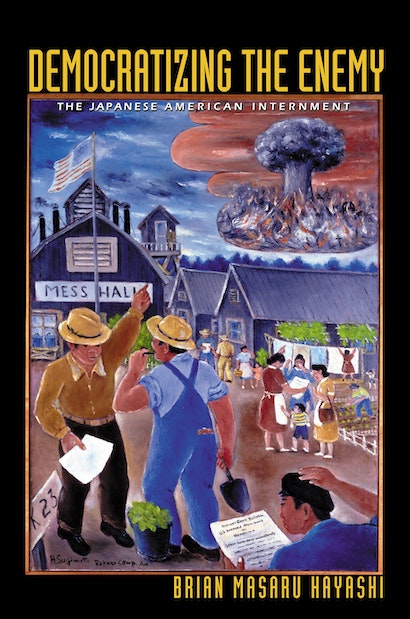 During World War II some 120,000 Japanese Americans were forcibly removed from their homes and detained in concentration camps in several states. These Japanese Americans lost millions of dollars in property and were forced to live in so-called “assembly centers” surrounded by barbed wire fences and armed sentries.


In this insightful and groundbreaking work, Brian Hayashi reevaluates the three-year ordeal of interred Japanese Americans. Using previously undiscovered documents, he examines the forces behind the U.S. government’s decision to establish internment camps. His conclusion: the motives of government officials and top military brass likely transcended the standard explanations of racism, wartime hysteria, and leadership failure. Among the other surprising factors that played into the decision, Hayashi writes, were land development in the American West and plans for the American occupation of Japan.


What was the long-term impact of America’s actions? While many historians have explored that question, Hayashi takes a fresh look at how U.S. concentration camps affected not only their victims and American civil liberties, but also people living in locations as diverse as American Indian reservations and northeast Thailand.

Brian Masaru Hayashi is Associate Professor of Human Environmental Studies, Kyoto University, and author of For the Sake of Our Japanese Brethren: Assimilation, Nationalism, and Protestantism among the Japanese of Los Angeles, 1895-1942.

"This fresh and far-reaching interpretation of the World War II Japanese American exclusion and detention experience achieves benchmark historiographical status. . . . Brian Hayashi has written a book that dramatically reconfigures how the topic of the Japanese American internment will be approached in the coming generation of scholarship."—Arthur A. Hansen, Journal of American History

"Brian Masaru Hayashi's ambitious effort makes available much new archival data and presents original and provocative interpretations. . . . Democratizing the Enemy is an original and stimulating examination of the World War II incarceration of Japanese Americans, and as such, it brings new perspectives to the topic. It should be read by all those interested in this unique and tumultuous period."—Stephen S. Fugita, Western Historical Quarterly

"Brian Hayashi's book is one of the most detailed, insightful and thoroughly documented accounts of the Japanese American experience during World War II. It will set a new standard for scholars for years to come."—Lane Ryo Hirabayashi, University of California, Riverside, author, Inside an American Concentration Camp: Japanese American Resistance at Poston