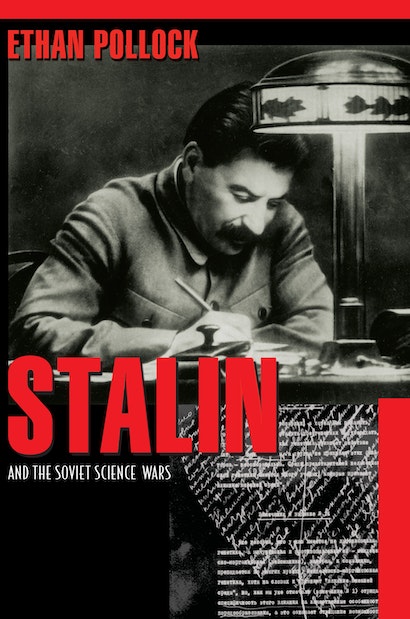 Between 1945 and 1953, while the Soviet Union confronted postwar reconstruction and Cold War crises, its unchallenged leader Joseph Stalin carved out time to study scientific disputes and dictate academic solutions. He spearheaded a discussion of “scientific” Marxist-Leninist philosophy, edited reports on genetics and physiology, adjudicated controversies about modern physics, and wrote essays on linguistics and political economy. Historians have been tempted to dismiss all this as the megalomaniacal ravings of a dying dictator. But in Stalin and the Soviet Science Wars, Ethan Pollock draws on thousands of previously unexplored archival documents to demonstrate that Stalin was in fact determined to show how scientific truth and Party doctrine reinforced one another. Socialism was supposed to be scientific, and science ideologically correct, and Stalin ostensibly embodied the perfect symbiosis between power and knowledge.

Focusing on six major postwar debates in the Soviet scientific community, this elegantly written book shows that Stalin’s forays into scholarship can be understood only within the context of international tensions, institutional conflicts, and the growing uncertainty about the proper relationship between scientific knowledge and Party-dictated truths. The nature of Stalin’s interventions makes clear that more was at stake than high politics: these science wars were about asserting that the Party was rational and modern, and about codifying the Soviet worldview in a battle for the hearts and minds of people around the globe during the early Cold War. Ultimately, however, the effort to develop a scientific basis for Soviet ideology undermined the system’s legitimacy.

Ethan Pollock is Assistant Professor of History at Brown University.

"This is a very accessible and sometimes astonishing study of what happens when politicians attempt to mould the culture and intellectual life of a society to justify their ideologies. . . . It's a fascinating study of a leader who genuinely believed that the credibility of 'scientific' socialism was at stake."—Steve Carroll, The Age

"Ethan Pollock's remarkable book offers a radical and intriguing reevaluation of postwar science debates by suggesting to take seriously Stalin's public call for scientific objectivity and free and open exchange of opinion. Drawing on a wealth of recently declassified archival documents, including internal party memos and Stalin's personal notes, Pollock traces a surprising evolution of the leader's thought about the relationship between ideology and science.... Thoroughly researched, provocatively argued, and occasionally entertaining, Pollock's book reveals a much greater degree of Stalin's personal involvement in both the administrative and the intellectual sides of the postwar debates than previously thought."—Slava Gerovitch, Russian Review

"[T]he value of this work is to reveal with great clarity the unfolding debates and Stalin's role within them. Stalin was no fool, but Pollock rightly notes his 'remarkable intellectual arrogance' and the damage of using political methods to settle scientific debates. This book is yet another example of the consequences of destroying the independent associations of civil society."—David W. Lovell, European Legacy

"In Stalin and the Soviet Science Wars, Ethan Pollock provides a fascinating examination of the ideological controversies that shaped Soviet science during Stalin's last years. . . . He adds considerably to our understanding of the complexities of the debates in philosophy, linguistics, and economics, while his analyses of the cases of biology, physics, and physiology contribute to an already extensive literature. This book is also a contribution to the understanding of Stalin and Stalinism. . . . This book will be of interest to advanced undergraduate students and specialists in the philosophy and politics of twentieth-century science, Soviet history, and the history of Stalinism."—Paul Josephson, Isis

"[Pollock] follows the various debates and ideological conflicts in detail, but his accounts are easy to read and at times almost gripping in the manner of a thriller."—Bob Dent, Budapest Times

"[T]his is a fascinating story that deserves to be included on the reading lists of courses in Soviet history and in the history and sociology of science."—Andrew Jenks, Technology and Culture

"Pollock's prose is succinct, precise and elegant; his argument is cogently developed, subtle, sophisticated and compelling. This excellent and engaging volume will be indispensable reading for all Soviet historians and students, as well as for those interested in the social construction and political control of scientific knowledge."—Nick Baron, Europe-Asia Studies

"Pollock's study is an extremely valuable contribution to the debate on the nature of Soviet Science, but it also deserves a wider readership amongst all those interested in the influence that Marxist-Leninist ideology had over both the Soviet state and Josef Stalin personally."—Michael Froggart, South East Europe Review for Labour and Social Affairs

"[T]hose who would like to acquaint themselves with what the archives and memoir literature have yielded on these matters over the past twenty years may find this a useful place to begin. The text is gracefully written, the biographical appendix is useful, and the scattering of contemporary photographs helps the reader picture many of the principal actors."—Mark B. Adams, Journal of Modern History

"Pollock has written a fascinating book. . . . [I]t throws a great deal of light on the nature of the Soviet Union at the height of the Cold War."—John Baxter, International Socialism

"Stalin and the Soviet Science Wars is a fascinating book about one of the most enigmatic periods in Soviet history. With great insight, and on the basis of thorough archival research, Ethan Pollock examines the organized discussions of science in Stalin's last years. He shows how important those discussions are for understanding not only Stalinism but the Soviet experience as a whole. This will be an indispensable book for historians of the Soviet Union and for historians and sociologists of science more generally."—David Holloway, Stanford University

"Ethan Pollock has written an elegant and brilliantly penetrating history that is so rich in detail and broad ranging in its analysis that it will quickly become required reading for anyone seeking to understand how Stalin managed the Soviet Union after World War II."—Martin J. Sherwin, Tufts University

"This is a major and original contribution to the study of late Stalinist society. As a reader, I enjoyed it very much. It is poised to become a standard text on Stalinist ideology and science, fascinating for professionals and accessible to students. Clearly conceived and organized, the book is based on impressive research, including little-known or previously unknown documents from the Central Party archive, Russia's State Archive, and the Soviet Academy of Science."—Vladislav Zubok, Temple University, author of Inside the Kremlin's Cold War

"Stalin and the Soviet Science Wars tells the story of each of the scientific debates under focus with admirable clarity and concision, but without sacrificing the complexity of the issues or the stakes involved. Its portrayal of Stalin was, to me, utterly persuasive. This book will have a broad audience, not only in undergraduate courses on Soviet history, Stalinism, and the history of science, but also among the informed public."—Lewis H. Siegelbaum, Michigan State University, author of Stalinism as a Way of Life